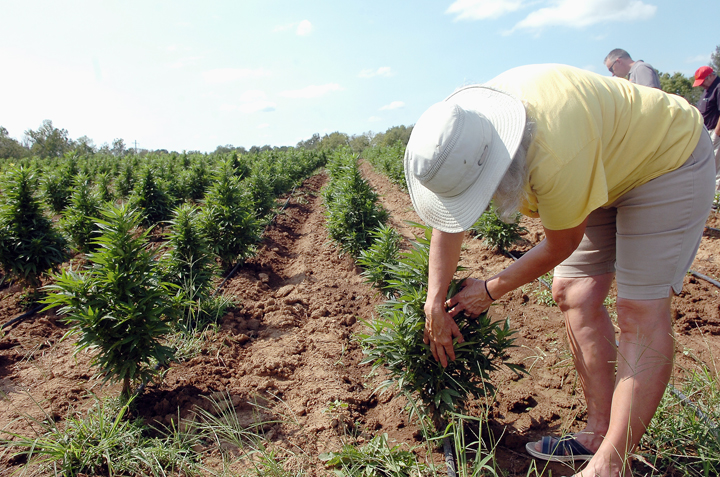 Kenneth Anderson has been a tobacco farmer all his life.

Over the years, his Anderson Brothers Farm located on Clintonville Road has been filled with tobacco plants sprawling over more than 100 acres of land.

However, Anderson’s tobacco crop has recently dwindled to about 50 acres because of contract cuts and other issues related to the industry.

“An acre of tobacco grosses about $5,000 so we’ve lost over a quarter of a million dollars of our gross income the past two years,” Anderson said. “To stay in business we have had to look at alternative crops.”

That alternative crop is now a hot one across the state of Kentucky: industrial hemp.

Industrial hemp was also the focus late last week of the Clark County Farm Bureau’s Ag Day, where dozens of people, including other area farmers, visited Anderson’s farm. Anderson is growing some 14 acres of hemp for GenCanna Global, which shares the Hemp Research Campus on Colby Road along with Alato Holdings, Inc. The two are leading industrial hemp cultivation and processing companies.

Ag Day focused on the rise of industrial hemp, CBD (cannabidiol) oil production, seed separation, crushing and processing as Atalo Holding, Inc.’s Bill Hilliard and Tom Hutchens gave visitors a glimpse of what is being done at the hemp campus with crops such as Anderson’s.

“I think we can grow it here because it’s a plant that has a big history here and a big history in the state of Kentucky,” Anderson said. “Not for what they’re using it for now, but the plant itself was grown here years and years ago.”

Hemp was a huge crop in Kentucky and the surrounding areas around World War II, but shifts to cotton along with the anti-marijuana movement put an end to the industry by the mid 20th century.

In 2014, a new farm bill was passed which cleared the way for states to begin research-driven pilot programs such as what is currently happening at the Hemp Research Campus to test the crop’s viability in producing fiber, medication and food. Kentucky is one of 28 states which have passed pro-hemp legislation so far.

While the crop remains a Schedule I controlled substance — in  the same class as heroin, LSD and bath salts — many farmers have taken a chance on growing it.

“It’s still a pilot product and they’re researching,” Anderson said. “There’s potential losses, potential gains. Nobody knows until the market emerges or dries up before it even gets started. It’s exciting and I’ve learned a lot the past couple years.”

Hemp advocates such as Hutchens hope reintroducing the crop will help farmers, including Anderson and others around Clark County, keep their farms alive and to make money.

“We’re trying to use this facility as a launching pad for a new crop,” Hutchens said. “We’d like to say we’ve had very good community support and you don’t know how much that is appreciated. When you hear the word hemp, most people have a certain idea of what that might be and it’s not what people think it is.

“We don’t want people to leave here and think hemp is marijuana, because we’re nothing about that.”

Hemp is defined in the farm bill as cannabis that’s less than 0.3 percent THC content by weight. THC is the psychoactive chemical in marijuana, which contains 10 percent THC on average.

Hemp has hundreds, if not thousands of uses, including food, green building materials, textiles, paper, fuel, body care products and can even be used as a replacement for plastic and fiberglass.

Atalo Holdings Inc. and GenCanna are researching and developing the crop along with testing various processing methods.

“We’re doing some of the same things and we’re doing some things very differently,” Hutchens said. “We’re cooperating, but we’re also competing. This is a friendly competition because this whole hemp oil process is in it’s very infancy and we need to figure out a way to do this. After all, we’re all farmers and all Clark Countians or Fayette Countians that are involved in our group and one of our main goals is to make some money.”

Hutchens said the Hemp Research Campus is the largest licensed grower in the state with more than half the acres licensed in the state of Kentucky.

“We have a monopoly and that’s kind of a nice thing,” Hutchens said. “Some people don’t think it is, but we have more acres because we work harder than anybody else. That’s the way it is.”

Hutchens said there are three business challenges or income screens Atalo Holdings, Inc. and GenCanna are trying to learn from including growing seeds from someone who has a certain variety so it can be licensed, grown and resold to farmers here, crushing the seed to make oils and meal for human food and the making of CBD oil.

“Cannabidiol is used for various ailments that people have and it’s a buzz word really for all the popularity of hemp,” Hutchens said. “The CBD model will be like the tobacco production model or another model that’s in-between. It’s just starting from the very beginning.”

Hutchens also spoke of hemps rich tradition in the state of Kentucky, dating back to it’s production for rope and for canvas in the military. He also spoke of the difference between hemp and marijuana, which is still a common misnomer.

“The difference between hemp and marijuana is the actual chemical constituents in the hemp plant,” Hutchens said. “Hemp has less than 0.3 percent of THC. Last year, we had some growers that were visited by some young folks thinking they were going to get some of that magic and some of them got caught. They could smoke a truckload of it and it wouldn’t get them high so the joke is on them if they try to get it.

“That’s important though because it is a felony to possess it. It’s considered a drug felony should you seek it.”

David Davis, Clark County agriculture agent, said each farmer who grows hemp much possess a memorandum of agreement from the Kentucky Department of Agriculture.

“The KDA keeps that agreement in the truck with them,” Davis said. “There’s a lot of red tape involved with it and without a MOA through the KDA, you pull a plant out of the backyard basically and it’s still industrial hemp it’s still considered a Class One narcotic, they didn’t change that definition. Under the KDA pilot program is how we’re allowed to do anything with it and the KDA has a right to come on at any time and check THC levels.”

“And it doesn’t taste as bad as fish oil,” Hutchens said. “It tastes good, it’s good for you and it has a high protein content, about 34 percent.”

Hutchens said his goal is to have hemp oil products in every school lunch in the country and make it affordable where all school lunch programs can use it.

“Right now we have 14 different varieties to work with including several from Canada,” Hutchens said. “We’ve worked agreements with people that I pay a royalty of 10 percent to grow it here and make it work or figure out how to make it work.”

Hutchens said while the Drug Enforcement Administration has not been helpful to the production of hemp products, there’s enough interest now that he doesn’t think “they could ever put the Genie back in the bottle.”

Many people in the state believe in order to make hemp a success, the plant needs to be taken off the federal list of controlled substances. The Industrial Hemp Farming Act of 2015, which is still in the Senate waiting further action by a committee, would help.

The farm bill which passed in 2014 for hemp experimentation will expire in two years. It will be up to congress to renegotiate a new farm bill, although Hutchens said Kentucky Congressman Thomas Massie has stressed hemp does not have a timetable.

“We’re going on that,” Hutchens added “There will probably be a court case down the line to determine the future. Right now, the DEA’s position and the farm bill are in direct opposition of each other.”