Bojangles’ restaurant to open by November 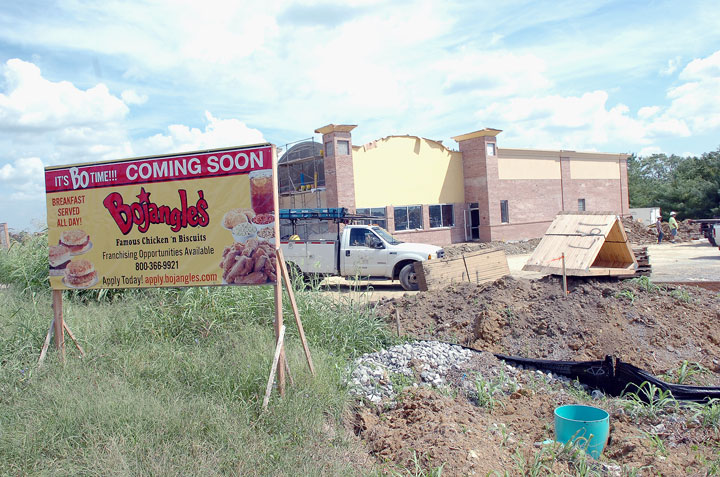 By Steve Foley, The Winchester Sun

Commuters along Lexington Avenue near Hospital Drive can’t help but notice a lot of activity going on at what will soon be a new restaurant option in Winchester.

Located directly across the street from Wendy’s, Bojangles’ Famous Chicken ’n Biscuits is slated to open its newest Kentucky location by November, according to Bojangles’ public relations and media relations specialist Cliff Cermak.

According to the company’s website, Bojangles’, Inc. is a highly differentiated and growing restaurant operator and franchisor dedicated to serving customers high-quality, craveable food made from Southern recipes.

As of March of this year, Bojangles’ had 671 system-wide restaurants, of which 288 were company-operated and 383 were franchised restaurants, primarily located in the Southeastern United States.

“First, along with our franchisees, we are thrilled to grow the Bojangles’ brand in Kentucky,” Cermak said. “The reception from our recent opening in Versailles — our first company-owned location in Kentucky which opened in July — was simply incredible, and that gets us really anticipating opening day for our upcoming location in Winchester.”

Cermak said the company has heard from many loyal Bojangles’ fans around the Lexington area, asking about future locations. Currently there are five Bojangles’ in Kentucky including Bowling Green, Corbin, Franklin, London and Versailles.

“It’s just fantastic to expand our footprint to this area and be part of the local community,” Cermak said. “As far as where we locate our restaurants, we want to make sure we’re in a convenient area for our customers, whether that’s near the communities they live in, on their commute or in an otherwise easy-to-access location.”

Cermak said prior to the Winchester location opening, restaurants will open in Mount Sterling and in Georgetown. Cermak also could not confirm any other Bojangles’ restaurants in Kentucky being planned at this time, but several are planned for 2017.

Bojangles’ is renowned for their hand breaded bone-in chicken, freshly made biscuits and “fixin’s” such as dirty rice, seasoned fries and green beans along with their trademarked Legendary Iced Tea, which is steeped the old fashioned way.

“Additionally, breakfast is very popular at Bojangles’,” Cermak said. “We serve breakfast fresh all day, every day. Whether it’s early in the morning, lunchtime or dinner, you can get one of our breakfast biscuits, like out cajun filet biscuit, bacon, egg and cheese biscuit or sausage biscuit.”

Cermak said the Winchester location, which measures around 3,800-square feet, will employee between 30-35 team members.

“Interested candidates should visit our careers section at Bojangles.com for management and hourly positions available at the new store,” Cermak said.

Cermak said the Winchester location will be a company-owned location.

Hudson Construction Company’s Ron Messer, who is overseeing the Winchester Bojangles project, said construction on the new restaurant has been going well.

“Construction started July 16 and we will go until the end of October,” Messer said. “This is our third Bojangles. I’ve done two others. I guess I’m the only one my boss trusts to come up here and do it.”

Messer, who also oversaw construction of Bojangles’ locations in Chattanooga and Manchester, Tennessee, said his company is expected to be finished with construction by Oct. 20.

“There’s about 16 different trades working here,” Messer said. “They’ve (Bojangles’) went from one prototype to another recently. The outside is the same, but the inside is totally different. Now, you can watch them cook biscuits, where before you couldn’t.”

Messer said he’ll be on site for about six more weeks and on the opening day.