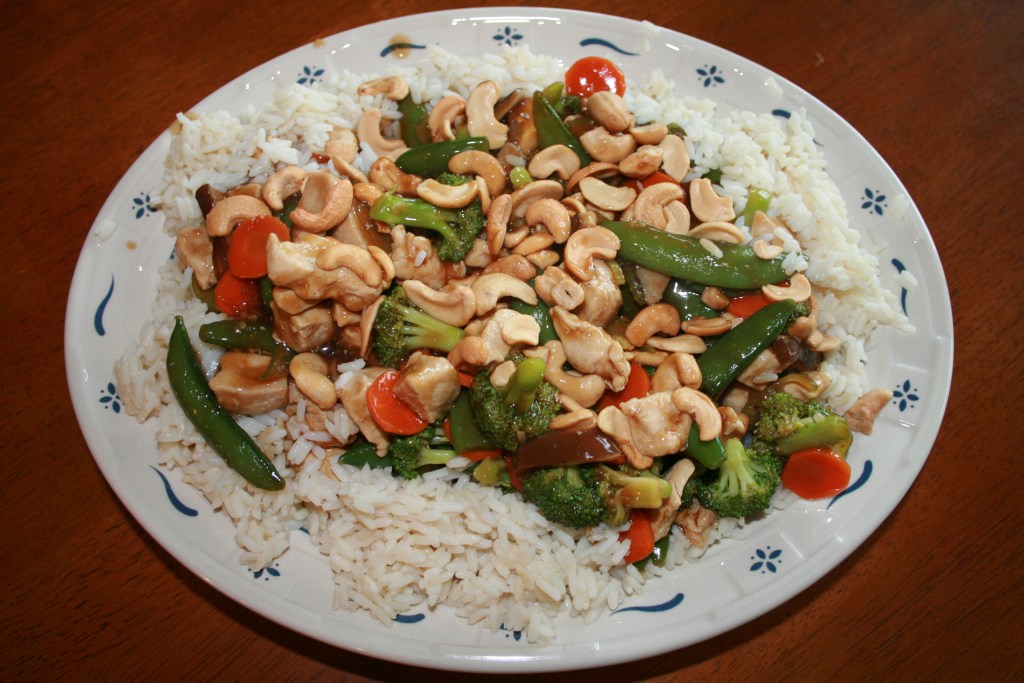 We were going to have chicken again for supper (we eat a lot of chicken), and before I left for work I pulled out my folder labeled “chicken” and went through the recipes.

I laid several recipes aside, and after looking at them a second time, the winner was Cashew Chicken Stir-Fry.  The recipe follows:

In a skillet, heat 3 tablespoons of the broth.  Meanwhile, combine the cornstarch, soy sauce, ginger and remaining broth until smooth; set aside.

Add chicken to the skillet; stir-fry over medium heat until no longer pink, about three to five minutes.

Add garlic, carrots and celery; stir-fry for three minutes.  Add broccoli and peas; stir-fry for four to five minutes or until crisp-tender.Stir broth mixture; add to the skillet along with the chicken. Cook and stir for two minutes.Stir in cashews.Serve over rice if desired.  Yield four servings.

We love cashews, and who doesn’t? I always have some in the pantry. However, since we’d just gotten back from vacation when I decided to make this dish, the cupboard was bare and I didn’t have several of the other ingredients on hand. At lunchtime I headed to the grocery to pick up those missing items.

The trip to the store took a little longer than I thought it would because I ran into Gloria, an old friend, and we had to get caught up. Not only that, but I could not find snow peas. First I looked in the produce section.After a few minutes I gave up and asked one of the store associates and he let me know they didn’t have any fresh ones so I headed to the frozen section. I walked that aisle about four times before I finally found the one lone brand they carry. Of course it was hidden behind the freezer door frame. After grabbing a bag of the frozen snow peas, I was off to the check-out, which thankfully was quick. I got back to the office, put everything in the refrigerator/freezer and got to my desk just as my hour was up.

When I got home, the first thing I did was start washing the vegetables, then used my handy dandy mandolin to slice up the carrots and celery.While slicing the veggies I really didn’t think the 1/2 cup carrots and 1/2 cup celery sounded like it would be enough, but I trusted the recipe and just used the amounts called for.  I ended up using two carrots and one large stalk of celery.Two crowns of broccoli equaled the three cups I needed, and after washing it, it was a breeze to cut up.

Even though the recipe calls for slicing the chicken breast into strips, I cut them into bite-size pieces so it would cook faster and supper would be on the table quicker — since the granola bar I’d eaten in the car at lunchtime had worn off and I was beginning to get hungry.

After putting the three tablespoons chicken broth in the skillet, I went ahead and placed the sauce ingredients in a small bowl. I then heated the broth in the skillet and when it was hot, I added the chicken.About half way through cooking the chicken (and yes, I cooked it longer than three to five minutes – I wanted no pink in the middle), I started the white rice. Since Brad likes wild rice (which he gets in Minnesota every year when he goes on his annual camping/canoeing/fishing trip), I fixed some of that for him to add his plate later. You see, I don’t eat the wild rice – I think it tastes like dirt.

After the chicken was cooked to my liking, I placed it in a low oven to keep it warm.

About this time, Brad came home and asked “what’s for supper?”

When I told him, he said he thought his shiitake mushrooms would be good in it and asked if I would add some. Knowing I could just pick them out of my serving (remember – I don’t like mushrooms), I agreed.  Brad knew he had some mushrooms that needed to be cut so he ran out and grabbed there.

While he was outside, I started stir-frying the carrots, celery and garlic as directed.

Now when I think of stir-fry, I think of a hot skillet and fast cooking, but this recipe called for medium heat while cooking. The process of cooking the vegetables took longer than I thought it would. When the carrots and celery were crisp tender, I added the broccoli, peas and mushrooms and “stir-fried” for a few more minutes.Before adding the sauce I’d put together earlier, I had to stir all the ingredients together and learned that cornstarch gets really stiff after sitting in liquid. It took a little work to get everything mixed and smooth.

After the sauce was smooth, I added it, along with the warm chicken to the veggies and stirred. After letting the sauce thicken a bit, everything was ready to place on the table.

To make the dish appealing, I put the rice on the dish and ladled the chicken mixture over top.

I got a photo and as we were sitting down to eat, Brad said didn’t you say there were cashews in this.

You guessed it — I was in a hurry and forgot to add the cashews before plating the dish.Quickly I grabbed the cashews and sprinkled some on top, gently stirred and took another photo.As we served ourselves, we both added more cashews to our serving.

Brad thought this dish was really good. After picking the mushrooms out of my serving and giving them to him, I took a bite. I didn’t think it had much flavor, but maybe my taste buds were off for some reason.

I nailed this recipe, and because Brad was such a fan, it will be placed in my self-made cookbook.

Next time I make it I would not hesitate to add other vegetables – maybe bell peppers and onions. I think you should be creative and use whatever vegetables you like in this dish.

Ask a question, save a life