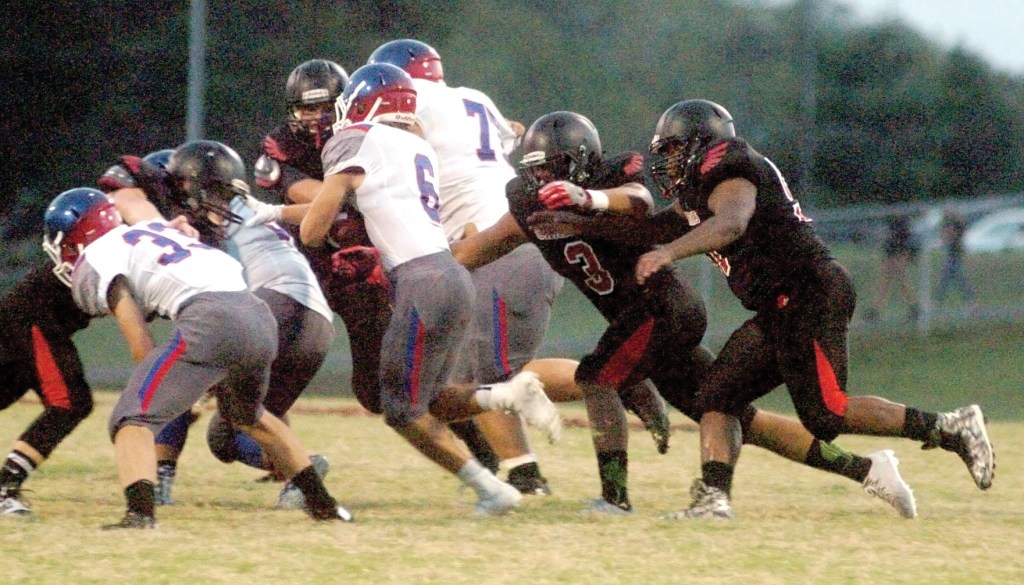 GRC’s Jehdon Jenkins, No. 3, chases down the Montgomery County running back in the first half last week. Casey Castle/casey.castle@winchestersun.com

The George Rogers Clark High School football team is ready for Bourbon County. The Cardinals have been ready since last Friday after defeating Montgomery County at home.

GRC (1-2) travel to Paris Friday to take on Bourbon County (0-3) at 7:30 p.m. But the Cardinals, who snapped a 14-game losing streak with a 28-14 win over the Indians, had turned their attention to the Colonels not long after the win.

“I’m excited for next week already,” senior lineman Caleb May said moments after the win. “It’s sweet tonight, but we’ll come in tomorrow and watch the tape, correct what we messed up on and get ready for Bourbon County.”

While the energy from beating a rival has been good, GRC coach Mike Riddle said it’s mostly been busy as usual.

“Our attention to detail has beee good. Our preparation has been what it needs to be,” he said. “It hasn’t been a big change. We just try to attack each week.”

But the Cardinals are feeling more confident.

“Our confidence has picked up,” Riddle said. “They can see how good we can be, especially on defense.”

That defense has given the Cards a bit lift, particularly against Montgomery County when it forced four fumbles. Three of those were returned for scores.

And the defense has been keyed by the play of its defensive line, which seems to play with more confidence and grit each week.

The defense will have a bit of a test Friday. The Cardinals have faced two teams who primarily run the ball in Anderson County and Montgomery. Henry Clay ran a largely balanaced attack, but the Colonels love to pass the ball.

They attempted 32 passes against just 20 rushes in last week’s loss to Madison Southern. In Week 1, the Colonels threw the ball 27 times against just 12 rushes.

Bourbon spreads the field with four wide-outs, two backs in a shotgun set, Riddle said. They use screens, gets and zone reads as they try to throw the ball around.

But Riddle doesn’t believe it will be a difficult adjustment for his defensive unit.

“It’s not going to be anything in terms of shock value or anything,” he said. “It’s different in that our secondary will be more involved and you have to be on top of your pattern reads. But it also gives your defensive line a chance to rush the passer.”

While the Cardinals and Colonels aren’t district opponents in football, they are in every other sport, so the game still retains some of that feel.

“It’s going to be an emotional, rivalry type game,” Riddle said. “It will be a hostile environment. We’re definitely going to have to put a premium on ball security and field position.”