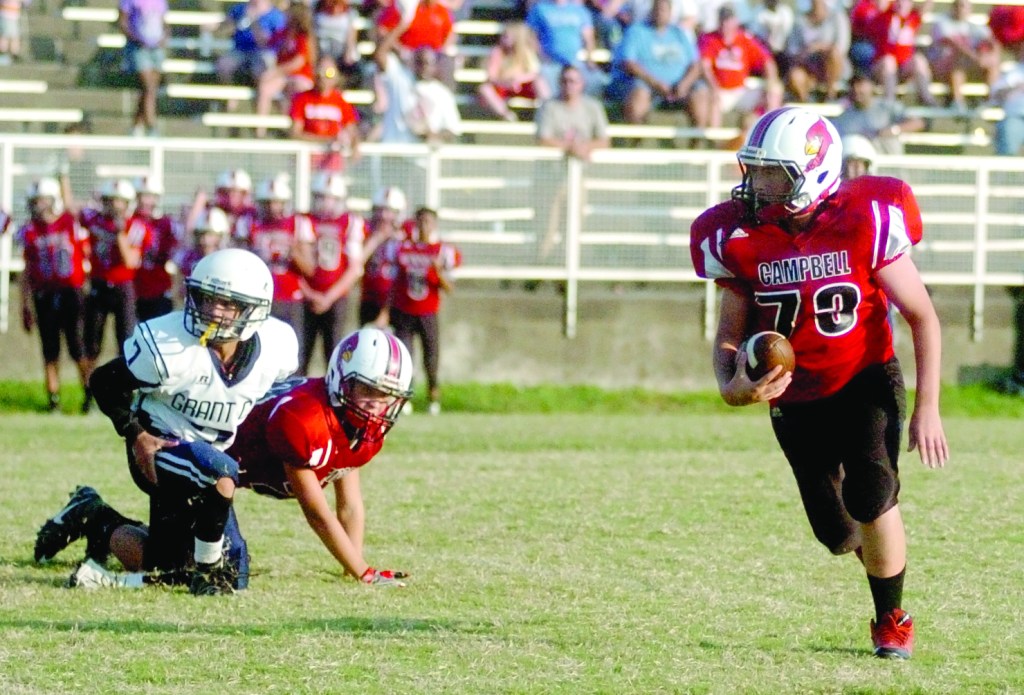 Casey Castle/casey.castle@winchestersun.com Campbell seventh-grader Josh Back, No. 90, hurries the Grant County quarterback during a victory at Cardinal Stadium Thursday night.

Both the seventh- and eighth-grade teams defeated visiting Grant County at Cardinal Stadium.

In the first game, the seventh-grade Cardinals took a 16-6 lead after the first quarter and built on that with a Jeremiah Mundy-Lloyd 60-yard TD run. After Grant scored on a loss pass play, the Cardinals struck again just before the half with a Carter Lowe one-yard TD run to cap a long drive.

In the second half, the Cardinals scored twice more, including a score from Mundy-Lloyd after his punt was blocked but he picked up the loose ball and sprinted 70 yards.

In the eighth-grade game, the Cardinals scored first on a safety and continued to put the Grant County offense around with their bigger linemen.

Dawson Gay returned the ensuing punt 48 yards for a score and Luke Ingram caught a pass for the 2-point conversion to give the Cardinals a quick 18-0 lead.

The Cardinals scored on a pair of Jackson Davis touchdown catches to lead 32-8 at haltime.

The Cardinals celebrated Homecoming between the games. They return to action next week when they travel to Georgetown to take on Royal Spring Middle School.