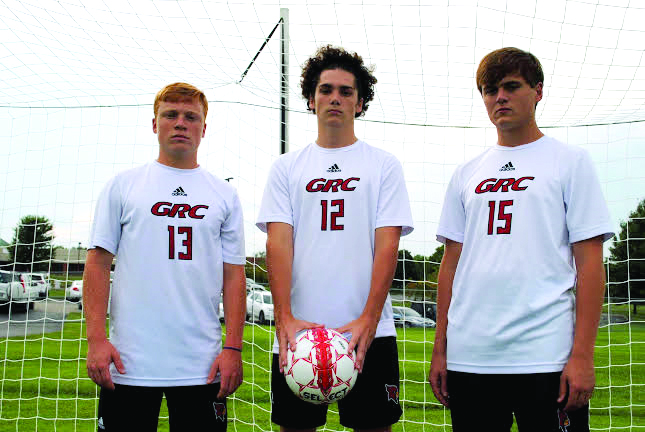 Sun photo by Wes Carrington GRC boys soccer seniors Landon Lowery, No. 13, Evan Carrington, No. 12, and Cameon Mithcell, No. 15, will be honored prior to the game against Bourbon County Tuesday night in Winchester. The game will also decide the top seed in the 39th District Tournament.

After a rough start to the season, the George Rogers Clark High School boys soccer team has turned it around. The Cardinals were winless through their first six games but have won four straight since then.

Perhaps most importantly, the Cardinals are now 2-0 in 39th District play after a 1-0 win over Paris Thursday night in Winchester.

In a slow game offensively, GRC came out on top thanks to a Dallas Wingert header off a Clayton Parks assist.

Hunter Caudill was back in goal for the Cardinals and earned the shutout.

GRC will face Bourbon County Tuesday night for the top seed in the district tournament The Cardinals will celebrate senior night at 7 p.m. with the game to follow at 7:30 p.m.

But first the Cards travel to Gatlinburg, Tenn. to take part in the Smoky Mountain Cup where they will take on Corbin tonight and Somerset Saturday.

When the boys return, they will have just the Bourbon County contest and a game agasint Boyd County left as home games. The remaining six games will be on the road.