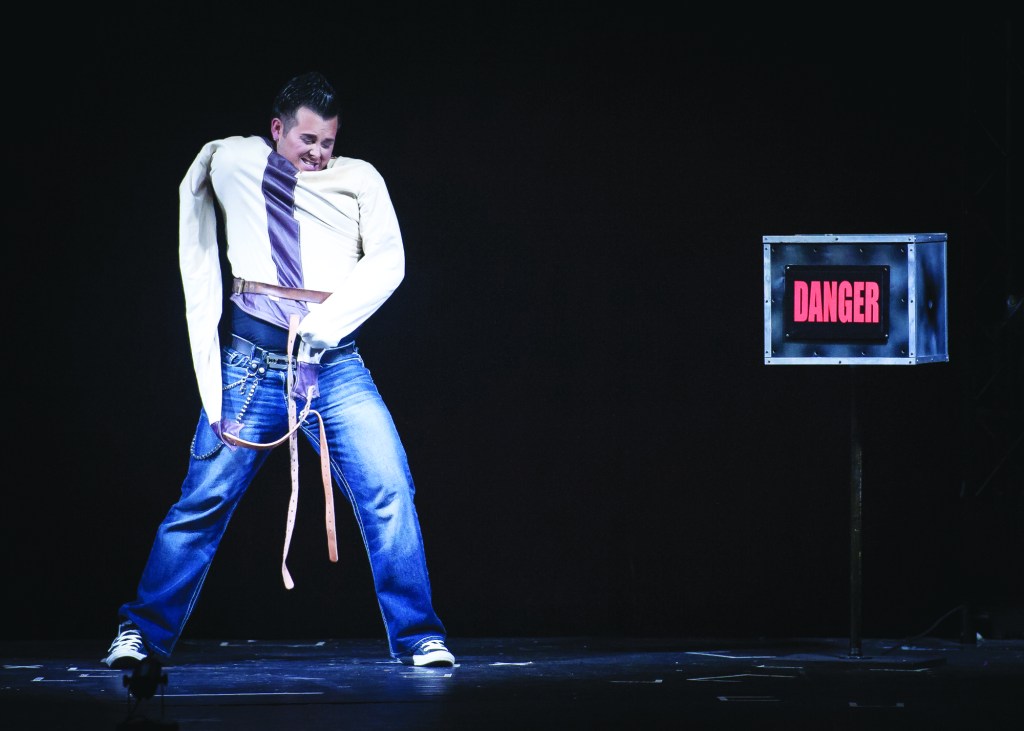 Illusionist Reed Masterson attempts to escape during an earlier production of his show 'Impossible Magic Live,' which will be at Leeds Center for the Arts at 7 p.m. Saturday, Oct. 15.

Reed and Ashton Masterson have traveled across the Midwest performing in numerous theaters and performing arts centers including Leeds Center for the Arts last year during their Extreme Magic production.

The talented Cynthiana-based illusionists will once again take to the stage at Leeds at 7 p.m. Saturday, Oct. 15, for their award-winning illusion show ‘Impossible Magic Live.’

Advance tickets are available at leedscenter.org and are $15 for adults, $12 for children and seniors 65-older. Tickets will also be available at the door the night of the performance, when doors open to Leeds at 6:30 p.m.

The Mastersons’ have been featured on the ABC and CW Network and just recently performed for more than 1,000 during a filming for an A&E television special which has yet to be released.

The couple bring a fast and edgy brand of magic incorporating dangerous stunts, beautiful animals, escapes, comedy and a variety of original and shocking stage illusions.

“Last year, we were here (Leeds Center for the Arts) with another group of illusionists called Extreme Magic,” Reed Masterson said. “This is just our show we travel with on a regular basis, we’re doing our own thing. For anybody who saw our show last year, I can tell you the new show will be 95 percent new from what they saw last time.

“We were just a small part of that first show.”

Masterson said since performing at Leeds last year, he and Ashton have become good friends with staff at the historic theatre.

“We had a great time here last year and the theatre is just amazing,” Masterson said. “We talk with them now on a regular basis and we’re doing this as a fundraiser. They had a silent auction they held as well in which we did a private show last year for about 30 people. I really like this theatre and they work really hard over there for basically zero money.”

While tickets for the October show are still available, Masterson said quite a few have already been sold.

“Our audience last year was great,” Masterson said. “There were only about 15 seats away from being sold out which is great for our first time here. Things went really well.”

Masterson said the performance is not your grandpa’s little kiddie magic show.

“It’s family friendly, but the adults and teenagers might have more fun than the younger kids,” Masterson said. “It’s a new-age type show and for this show, we’ll have all new lighting rigs and fixtures. It’s literally a production, it’s timed to music, there’s comedy and it’s edgy. It’s also in October so we’ll have a kind of Halloween type vibe. There’s a lot.”

Masterson said the show, which is slated to last between an hour and half to two hours, will also involve audience participation and technology including a live Facebook feed.

“It will be on Facebook and the audience can participate through the feed and have the opportunity to interact,” Masterson said.

Having performed in the past year in locations such as Maine, Massachusetts, New Hampshire and traveling to Las Vegas, Masterson said he thoroughly enjoys performing in smaller settings such as Leeds.

“We’re very nostalgic for one thing and we love it when we can work as many old theaters as we can,” Masterson said. “We have a bunch of shows booked for this year and next in theaters and there’s just something about them. It’s different in many aspects. Each stage and crew is different. Here at Leeds, it’s more laid back, made home like and we have more control. The theatre really just has to sell tickets, concessions and we try to make it as easy as we can for them.”

Masterson said he appreciates Leeds commitment to the performing arts.

“They work very hard and knowing we can give back and help keep performing arts alive in a small town is nice,” Masterson said. “We have a larger appreciation of these types of audiences because they don’t often get to see something like this, especially magic shows unless you’re in Vegas or a large venue. For smaller places like this they seem more into it because it’s something out of the normal for them.”