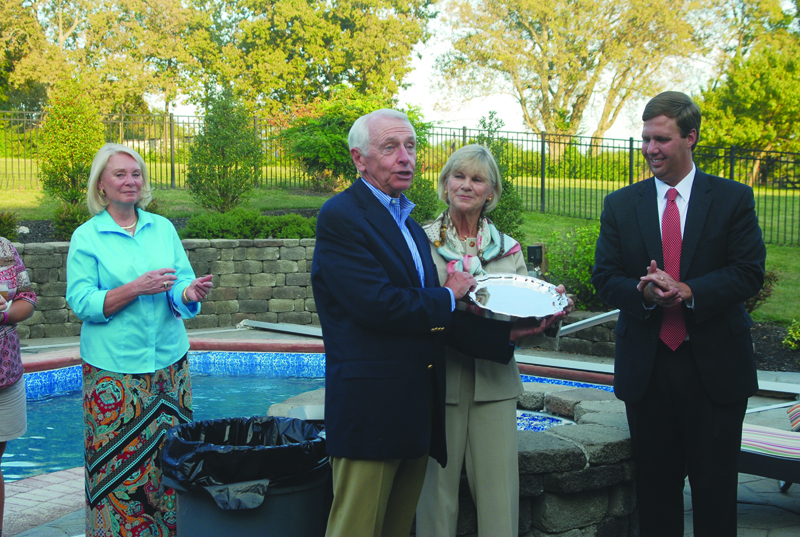 Clark County’s Democrats honored former governor Steve Beshear and first lady Jane Beshear earlier this week for their years of service to the party and Kentucky.

The Distinguished Democrat award was presented to the Beshears, who live in Clark County, during a fundraiser for state representative candidate John Hendricks.

Karen Ward, a member of Kentucky’s central executive committee for the Democratic Party, said Kentucky and Clark County both made significant growth during Steve Beshear’s two terms as governor.

“Here in Clark County, we’ve been the recipients of 17 new industries, 21 expansions or improvements and 2,500 new jobs,” she said.

Jane Beshear has been active as well, pushing through legislation to raise the drop-out age for high school students and raising support for domestic violence victims.

“Here in Clark County, in one day we collected $15,000 worth of goods for domestic violence shelters in Kentucky,” Ward said.

His two terms in office, he said, included one of the worst financial depressions in recent history, one which Kentucky emerged better.

“As we came out of that, we go things moving,” he said, citing a drop in unemployment from 11 percent to 4.9 percent when he left office last year. “When we left office, Kentucky was in the top 10 in the nations for high school graduation rates.”

His proudest accomplishment, he said, was approving kynect and encouraging affordable health insurance and health care for Kentuckians.

“We made health care accessible to everybody in Kentucky for the first time in history,” he said. “Whatever you can be screened for, (the number of people participating) is up 150 to 200 percent.”

“We couldn’t have done what we did for eight years without your support,” Jane Beshear said. “Clark County and Madison County had great support for eight years. It creates an even greater need to make sure John gets elected. Thanks for giving us an opportunity to serve.”

“The other states in the south are in a race back to the 19th century,” Steve Beshear said. “We don’t need to be part of that race. Kentucky has been one of the most progressive states the last eight years. It’s more important than ever … to be over there able to work with both sides than to yell and scream at each other.”