Pretzel croissants not so easy, but rewarding 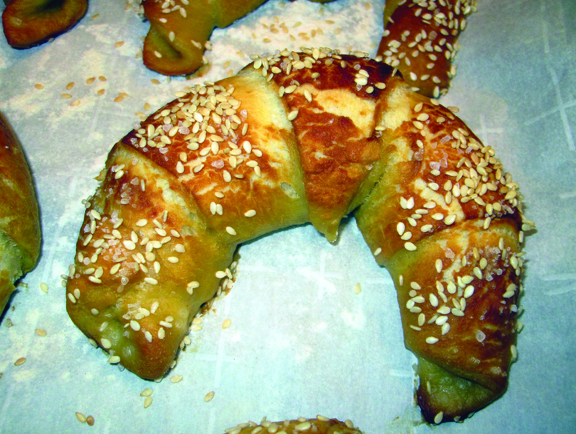 The pretzel croissants turned out beautifully.

As I was thumbing through the stack of recipes I’ve saved over the years, I ran across today’s recipe called Easy Homemade Pretzel Croissants.

I love croissants and I like pretzel rolls, so why not try the two together?

Today’s recipe was found at bavarianepicure.com.

In the bowl of your stand mixer fitted with a hook attachment, combine the warm water and yeast.

Give the mixture a gentle stir and let it sit for 5 minutes until the mixture is foamy.  Add the flour, olive oil, sugar and sea salt.

Mix on low speed for 1 minute until all the ingredients are mixed then slowly knead for 4 minutes on low-medium speed. The dough should be smooth and elastic.

Place the dough in a large, lightly greased mixing bowl and cover with plastic wrap.

Allow the dough to rise for 15 minutes in a warm environment.

Roll the pastry sheet into a 15×10 inch rectangle.

Roll out your yeast dough to the same size as the puff pastry.

Put the puff pastry on top of the yeast dough and press them together.Now,  fold the top half down and then the right half over top of the left half.

Roll the dough out until it has the same dimensions (15”x10”) as before.

Repeat the folding process and roll out the dough a second time.

Fold the dough a third time.

Cover the dough package with a kitchen towel and let it rise for 10 minutes.

To give the pretzel croissants their special taste and color, bring six cups water to a boil.

Add four teaspoons baking soda and turn off the heat.Transfer each croissant with a slotted spoon into the soda-water mixture and let it sit in there for 1 minute.  Let all the excess water drip off and transfer each croissant to the baking sheet.Sprinkle the croissants with coarse sea salt or sesame seeds.

Bake them for 25 minutes.

The croissants will change their color in the second half of the baking time.

As I mentioned earlier, I love croissants and pretzel rolls (truth be known I love almost any bread) so this recipe was right up my alley.  I knew I didn’t have puff pastry at home so I stopped at the grocery and picked up a package one afternoon.Supper was going to be leftovers from the night before so I was excited to get started making these croissants.  When I got home I grabbed the recipe and read it and realized I had yeast, but not instant yeast.

To my disappointment, I knew I’d have to wait until the next day to get baking because we live too far out in the country to make a trip to the grocery for one item.

The next day when I got home from work, I was anxious to start the process of making croissants for the first time.  Thanks to my granny Gibson’s generosity at Christmas several years ago, I have a stand mixer.

I mixed the warm water with the instant yeast and waited the 5 minutes before adding the olive oil, flour, sugar and salt.  Though I’ve had my stand mixer for several years, I’ve never made bread with it and had never used the dough hook.

The process of combining and kneading the dough was extremely easy with my mixer.It was neat to watch it come together.

The other day I read about a way to speed the process of getting your yeast bread to rise and decided I’d try it because I was hoping to have these croissants for supper.

You place your bowl of dough on a warm heating pad – I tried it and it did rise perfectly, though I let it go a little longer than required because Brad had come home and needed help with something outside.

When I got back to the dough, it looked and smelled great.

However, folding the two in half from the top proved a little tricky as the dough kind of stuck to the waxed paper — I guess I didn’t use enough flour.

At this point I realized we were not going to have pretzel croissants for supper.  Time was passing and I had to start supper so the next step in the croissant process had to take a back seat.

While our leftovers were heating up, I started the croissant process again: fold, fold, roll out, fold, fold.

Then I covered it with a towel to let it rest and rise for 30 minutes while we ate.

I read the next step in the roll out process and wasn’t quite sure I could get the dough in a 20 inch diameter circle, but I sure tried.

I even got out my ruler to measure the 20 inches — my counter is only 27 inches deep and 20 inches seemed really big.  I opted to just flour the heck out of my counter top and go for it.  It took quite a bit of time to get the dough rolled out, but finally I did it, even though it wasn’t really a circle.

I cut the dough into eight triangles and started rolling each one up and shaping them like a croissant.

Next I got the water boiling and added the baking soda, turned off the stove then placed three croissants at a time into the water, letting them soak for a minute. I then placed them on a cooking rack to drain.

My baking sheet was ready with the floured parchment paper on it so I just placed the croissants on the pan and sprinkled them with coarse sea salt.  As an afterthought, I looked in my spice drawer and found some sesame seeds and sprinkled half of the croissants with those.

Then placed them in the oven.

They smelled so good while cooking.  When the timer rang, I pulled them out of the oven and let them cool for a few minutes – even though it was late Brad and I had to share one.

I broke it apart and wasn’t sure they were done, but Brad said he thought they were fine.And boy were they good.

The recipe states these are easy, but I wouldn’t say that they were.

However, I believe they will be a lot easier the next time I make them and yes, I will be making them again according to Brad. You got it — I nailed it!

We ate pretzel croissants again the next day for supper and they were as good at room temperature as they were hot.  This recipe has found a home in my self-made cookbook.