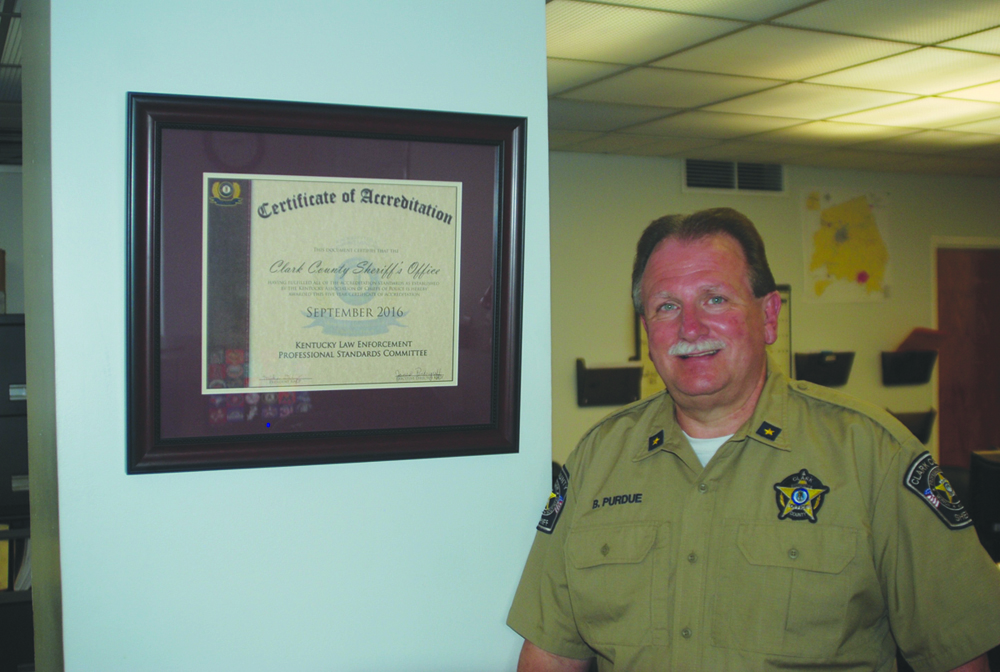 Clark County Sheriff Berl Perdue Jr. stands with his office's accreditation certificate, which was presented last week. Perdue said his office has been working on the accreditation process for more than a year.

The Clark County Sheriff’s Office recently received its accreditation from the Kentucky Association of Chiefs of Police, one of 17 to earn the recognition.

“It’s something I’m the most proud of since I’ve been sheriff,” Clark County Sheriff Berl Perdue Jr. said.

For the sheriff’s office, it’s been a 14-month task which affected changes to every area of its operations, Perdue said.

According to the Association, “Accreditation reflects that the agency was carefully measured against an established set of standards and has met or exceeded professionally accepted practices in law enforcement.”

“You have high standards you have to live by,” Perdue said. “It covers just about everything from law enforcement to tax collection, investigation, personnel, discipline. It’s the bible you live by. You have to document everything. It will be checked later.”

The initial accreditation is good for five years, and it will be checked after three years, he said.

The process was not only an analysis of the office and how it has functioned, but also setting the best possible policies and standards for future operations.

Capt. Paul Howard did a lot of the work, but everyone in the office bought in and contributed to the accreditation, he said.

“Some of the biggest changes are evidence: how you log, store and purge evidence,” Perdue said. “When we went through out evidence room and purged everything we could, we had things there from 1994. Deputy Rodney Horning worked himself to the bone for months” to secure court orders to return or destroy unneeded evidence.

Record keeping was another large area for changes.

“In most cases we’re down to two or three years of records instead of 10,” Perdue said. “We found we had years (of records) we didn’t need and weren’t required to keep.”

The office’s policies and procedures also went through anoverhaul.

“By doing this, it not only shows we are living and working under stringent guidelines, but it shows a commitment to the community.”

The process and standards are the same, though sheriff’s offices are responsible for collecting taxes and fees, unlike city police departments. Perdue said his office collects $25 million in taxes annually along with taxes and fees for other departments.

“I’m proud of my employees because they all bought into it,” Perdue said. “Everyone was behind it. They’ve cooperated in every way.”

Local news briefs for Winchester and Clark County for…