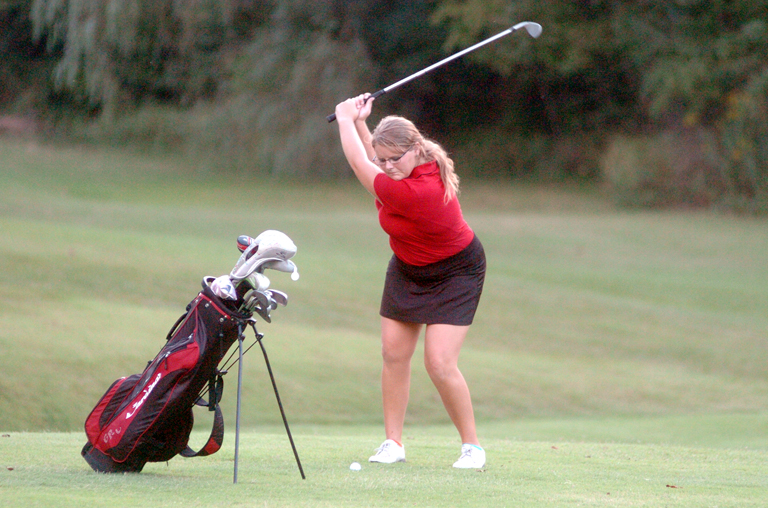 Casey Castle/casey.castle@winchestersun.com GRC’s Hannah Ritchie swings during a match against Scott County at the Winchester Country Club Monday. It was the final home match for Ritchie, the team’s only senior.

Senior Hannah Ritchie shot a 45 and Hannah Curreri shot a 43 to pace the Cardinals. But Scott County got a 29-stroke day from Reilly Marcum to earn the match victory, 164-198.

After the match, the Cardinals honored Ritchie, who has been a member of the team since the sixth grade.

“She will have plenty of opportunities after high school. She has put herself in a good position to do what she wants to do,” GRC golf coach Scott Franklin said. “She’s a good golfer, a good student and a good human being.”

Ritchie joined her older sister, Taylor, on the golf team as a sixth-grader while Anne Baldwin was coach until Hannah’s junior year.

Baldwin called Hannah the best putter she had while coaching.

Baldwin described her as being a calm, cool presense on the course.

“She didn’t let her emotions take over,” Baldwin siad. “Bad shots can sometimes effect the rest of your game, but she usually kept that in check.”

That attitude has helped Hannah be a stabilizing force on the golf team for seven years.

“She has always been one of the leaders, even when she was younger,” Baldwin said.

In a region dominated by Scott County and Mason County, reaching Bowling Green for the Kentucky State Tournament is always a difficult task for the GRC girls golf team.

But Hannah qualitied as an individual in 2014, joining then teammate Katie Franklin in the state tournament.

Now Hannah plays alongside Katie’s sister Molly, a freshman on the team, just like Hannah played with Taylor Ritchie.

“There was a rivalry between the sisters — it was always Hannah’s goal to beat Taylor,” Baldwin said. “They were both great players.”

Hannah has been invited to take part in a senior all-star tournament next month in Oldham County.

She and the Cardinals will be in action Sept. 26 in Kenton County for the region tournament.