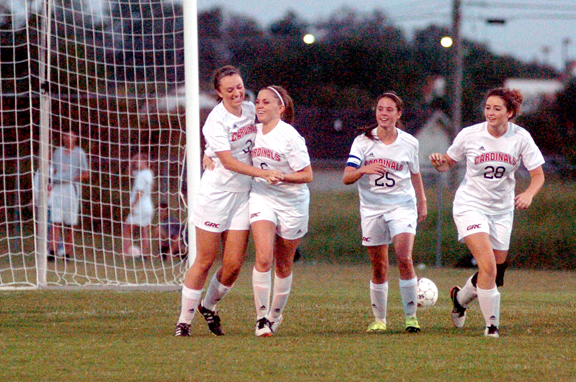 GRC"s Emily Caudill, left, is congratulated by teammates after scoring the second goal in a 3-0 win over Bourbon County Monday in Winchester.

It was the first of three district contests in a four-game stretch for the Cardinals, who improve to 8-2-2 on the season. GRC hasn’t lost since Aug. 27 and has allowed just two goals in the seven games since then.

The loss was just the second for the defending district champion Colonels, who fall to 11-2-1 and were 2-0 in district action before Monday night.

GRC controlled and possessed for most of the game and opened the scoring with Shannon Ramey’s penalty kick.

Emily Caudill added the second goal before the end of the first half off an assist by Brooke Woosley.

The third goal came courtesy Darby Manning when she knocked in a penalty kick, which was awarded after the Colonels were whistled for a handball in front of their own goal.

“We’re looking to get another win closer to securing No. 1 seed for the district tournament,” Abner said.