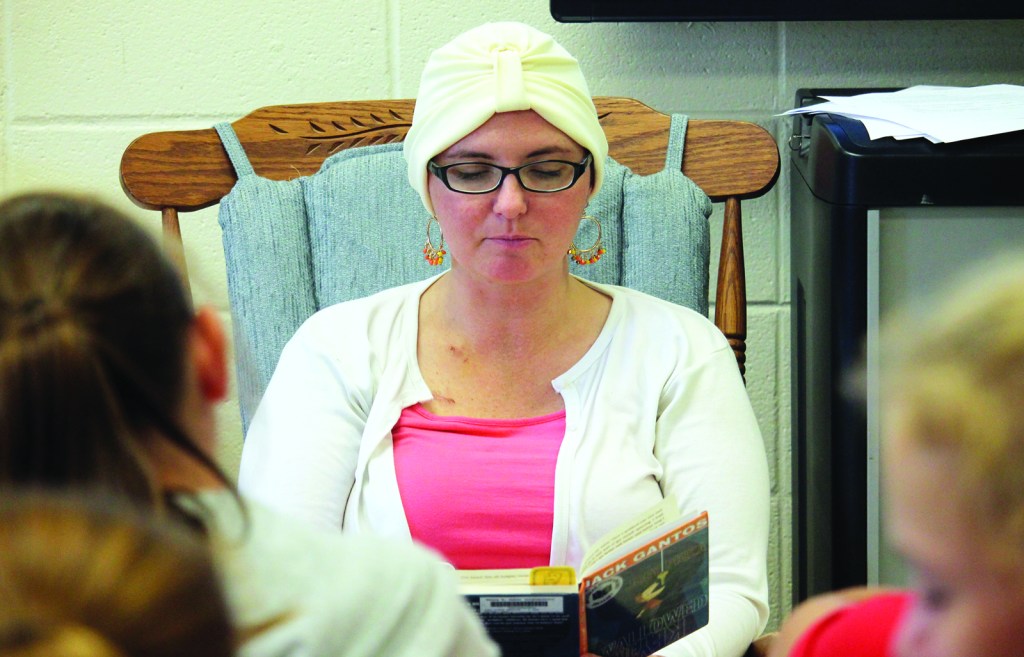 Kristy Blackwell, a sixth-grade language arts teacher at Baker Intermediate School, reads to her class Tuesday. Blackwell had a special send off Wednesday, which was also her first day of chemotherapy treatment to battle stage three brain cancer

The staff and students at Baker Intermediate School have rallied to raise money and offer assistance for a beloved teacher who received a devastating cancer diagnosis this summer.

Kristy Blackwell, 34, teaches sixth-grade language arts at Baker, which is the local center for fifth- and sixth-graders. Blackwell has been teaching in Clark County schools for six years.

Wednesday was Blackwell’s last day teaching at Baker for the 2016-17 school year, as she began an aggressive chemotherapy regimen to battle stage three brain cancer.

In June, while vacationing in Myrtle Beach with her husband of 10 years, Ben, and 4-year-old twins, Seth and Evan, Blackwell suffered a seizure that would eventually lead to her diagnosis.

“It was Sunday evening and we were getting ready to go to dinner,” Blackwell said. “We have been building up this pirate show for the boys all day and we were looking it up online. I remember I said ‘I don’t think we should go,’ and my husband asked how much it was.”

Before Blackwell could answer, she began to stutter and fell into a seizure.

“I don’t remember anything after that,” she said.

Blackwell had six seizures that night and woke up in the intensive care unit Monday morning. That is where she got news that doctors found something abnormal on her brain during her CAT scan and MRI.

“They told me then they weren’t sure if it was fluid or a tumor but that I needed to have it checked out by a neurosurgeon when I got home,” she said.

Blackwell said she thought the seizure and abnormal scan might just be caused by swelling from spending long days in the hot South Carolina sun while on vacation.

“I kind of dismissed it and didn’t think it was much of a big deal,” she said.

When she was finally discharged from the hospital, she learned the abnormality was tumor.

She said leading up to the seizure she experienced extreme fatigue and even a long bout of nausea.

“I was exhausted all spring,” she said. “There wasn’t enough coffee in the pot to keep me awake. I knew something was wrong because my husband and I celebrated our anniversary on May 28 and from about two days prior to that until I had my first seizure on June 5, I was nauseous the entire time.”

Blackwell had planned to see a doctor about the nausea when she returned from vacation. Instead, when she arrived back in Kentucky, she saw a neurosurgeon at the University of Kentucky who told her she had a low-grade tumor and needed surgery.

Less than a week after her seizure, Blackwell had a successful craniotomy to remove the tumor.

“Dr. Pittman still thought it was a low-grade tumor and thought they got it all and told me to come back in two weeks for a follow-up,” she said. “So we didn’t stress.”

“I just lost it in the lobby. That was my first realization it was cancer.”

Blackwell said she was devastated, especially because what she knew of brain cancer was a death-sentence. Terrified, she found herself in the doctor’s office unable to fully listen to what was being said.

“I don’t remember a lot of the conversation because I was so scared,” she said.

Blackwell was diagnosed with stage three oligodendroglioma, a generally slow-growing tumor of the supportive tissue of the brain.

According to the American Brain Tumor Association, these tumors are usually present for years before symptoms, like seizures, headaches and personality changes, occur. The exact cause of oligodendroglioma is not known.

Blackwell learned that because of the type of chromosomes in the tumor, it was treatable with chemotherapy and radiation, but there’s also a chance the tumor will return.

In July and August she completed 29 days of radiation, which caused extreme exhaustion and hair loss. Despite these symptoms, she continued to work and prepare for the first day of school Aug. 17.

“The doctors told me to live my life and that’s normally what I do at the end of the summer — get ready for the first day of school,” she said. “I told myself I was going to do it until the doctors told me I shouldn’t.

Blackwell’s nurse said she believes she’ll be too fatigued to continue work after started her chemotheraphy Wednesday. She will need to be off at least nine months for treatment, which includes pills and intravenous drugs.

Since school started, Blackwell has only missed one day — to have her port installed for the IV.

With tears in her eyes, Blackwell described what it it’s been like to be at work the last month.

“Sometimes it’s hard because I get that look from other teachers or students that they’re sad,” she said. “I’ve put on my brave face for the last month, but I feel like God has a plan. God has created a purpose for all of this.

“I’m amazed to see how kind and generous and thoughtful and loving and giving that all my students, coworkers, friends and family have been. It’s very overwhelming.”

After Blackwell’s diagnosis, her coworkers banned together and started helping out with rides and baby sitting. Once school started, about 10 Baker staff members met to discuss how they could help. From the meeting a list of ideas including a GoFundMe account, cotton candy sales at a school dance and selling bracelets that say “Be Well Mrs. Blackwell” was formed.

“With funds earned, Ben and Kristy can travel to and from treatments, provide for childcare when needed, buy for her dietary needs and focus less on financial burdens and more on health and healing,” the page states.

On Wednesday, Blackwell was “showered with love” by her coworkers and students. The staff hosted a potluck, gathered gift cards for a bouquet, wrote cards and recorded messages for a “Be Well Mrs. Blackwell” video. Students presented her with cards and her second-period class had a quilt made for her.

“We just wanted to remind her that she’s loved and that even when she’s not here, we’re here for her,” Heather Crowl, a fellow Baker teacher and co-organizer of the “Be Well Mrs. Blackwell” campaign, said.

Blackwell’s colleagues described her as a kind and passionate educator who has her students’ best interest at heart always.

“Those are her children, she loves them from day one,” Baker teacher Stephanie O’Rourke said. “She is engaging and develops a love of learning with her kids.

Baker teacher Jessica Pedigo said Blackwell’s absence will be felt by her coworkers and students.

“It doesn’t take long to love Kristy and her students are all so concerned,” Pedigo said. “We wanted to let her know we love her, because we know she would do the same for us.”

Crowl, Pedigo and O’Rourke have been spearheading the campaign and said the response has been overwhelming.

“After a certain amount was raised, she was just overwhelemd with emotions and very grateful and thankful for what she had and she said that instead of raising more money for her and her family, she really wants to just get the word out about this brain cancer and that there’s really no cure and that advances in research need to be done,” Pedigo said. “I think more than anything, she wants to get the word out that this could happen to anyone, that cancer doesn’t discriminate and to me, the irony of a teacher having brain cancer, that is her livelihood, but it doesn’t seem to phase her. She’s still on top of things.”

Blackwell is truly a teacher at heart, and said she hopes her cancer diagnosis can be a learning experience for others.

“This experience has been overwhelming, but I hope the lesson I can teach my students as well as my coworkers is that life is what you make it and happiness is choice,” she said.

To contribute to the campaign, visit GoFundMe.com and search “Kristy Blackwell” or contact Baker Intermediate School at 745-5190. The “Be Well Mrs. Blackwell” bracelets can also be purchased at the school.