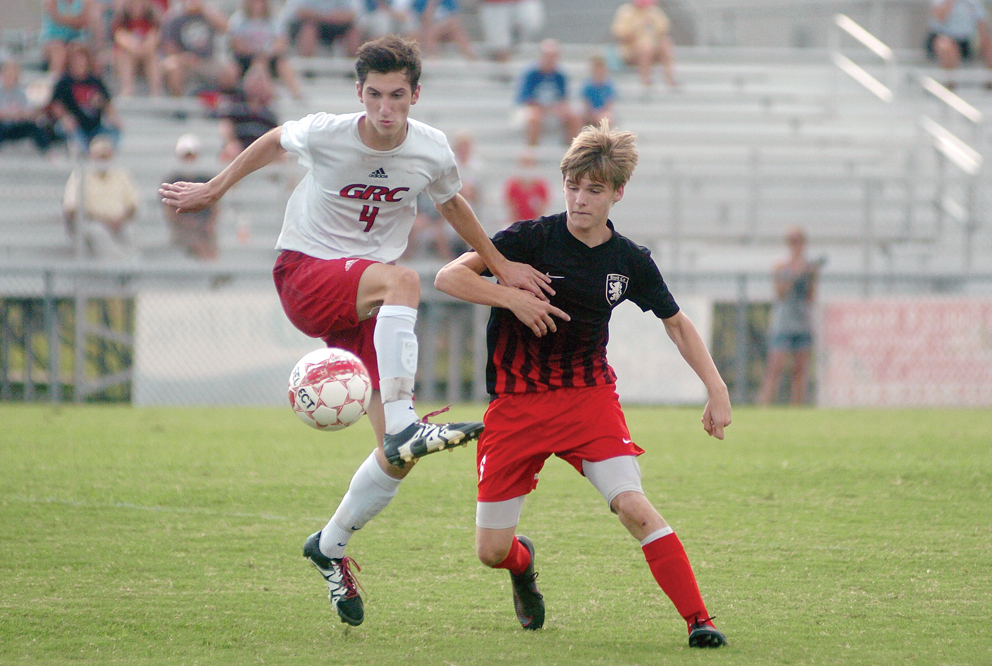 Casey Castle/casey.castle@winchestersun.com GRC’s Josh Bailey steps in front of a Boyd County player to knock the ball down during a 1-0 win Saturday in Winchester.

Summer may be over, but the heat hasn’t gone anywhere.

Good thing the Cardinals played a really strong first half, allowing them to find a cool space to enjoy a 1-0 win Saturday in Winchester.

“We played a pretty solid half,” GRC assistant coach Rex Catron said. “We dominated possession. We moved the ball well. Our midfield played outstanding the entire 40-minute half. The defense was solid. The movement was exciting to watch, and it shows what they are capable of.”

The Cardinals had struggled with finishing the previous two games. After losing to Bourbon County and missing out on the top seed in the district tournament but controlling most of the game, the Cardinals had traveled to Pendleton County, losing 4-3 after being blanked in the first half.

They looked in danger of that again Saturday, finding opportunity after opportunity but not being able to score on any of them.

Finally, GRC broke through when Evan Carrington hit a rocket from near the midfield line and close to the sideline that went over the head of the Boyd County keeper with about seven minutes left.

“We normally tell them to put it (free kicks) on frame, in case someone can flick it on or get a touch, but it caught the goalkeeper off guard and went in,” Catron said. “It was a good goal. Knowing Evan, he put it on frame as a shot. It was a great goal about 50 yards out and it won us the game..”

The feel of the match changed, as the Cardinals played with more confidence.

“We had a lot of chances but didn’t finishe,” Catron said. “After we got the goal, we dominated.”

But there wasn’t much time left to dominate, it turned out. The heat spiked throughout the came when there was no cloud cover and just as the players took the field to start the second half, officials decided to call the game.

“I hate to see the heat index take over, but there’s rules,” Catron said.

It was the final home game for the Cardinals, who now have five away games to finish off the regular season. They first travel to Grant County Tuesday night.