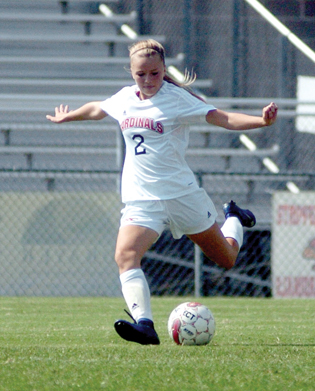 It’s not only tough to beat the George Rogers Clark High School girls soccer team, it’s hard to even score a goal.

The Cardinals posted yet another shutout Saturday when they beat Boyd County 8-0 at home.

It was the fifth straight for the Cardinals and 10th this season. GRC has allowed just 11 goals in 13 games and nine of those came in two games.

“We tend to work our defenders up on the outside which helps us possess, so we really throw a lot of people forward so we can possess the ball longer,” GRC coach Matthew Abner said. “We transiition well out of the back, adjusting for somebody stepping up out of the defense.”

It’s kept a lot of teams scoreless, including the Lions who had to watch as GRC scored eight times — two coming off the foot of Delaney Manning.

“They (GRC defenders) are fast and can pass and swing it out of the back to clear it up,” she said.

Manning scored both goals on shots from outside the box and toward the middle of the field — just where she likes it.

“Since I’m in the middle all the time, I like having it at a good angle so I can take a shot,” she said. “If it’s out wide, I like to cross it. But since I have the angle out front, I like to take that shot.”

Manning is one part of the young, deep core the Cardinals boast, another ingredient in the shutout recipe.

“We’re good on the ball from every starting position and even subbing in,” Abner said. “We don’t really turn the ball over from bad touches too often. Most everyone is pretty good on the ball, so we can go 16-18, even 20 deep and still be quality on-the-ball players that could maybe start for other teams in our region.”

And a lot of them can finish.

The Cardinals scored five goals in the first half and added three in the second, though the final trio of scores came after a relatively quiet start after the halftime break.

“We came out ready to play, but once we got ahead, I think we maybe eased up a little bit and didn’t play as hard as we could have,” Abner said. “It was hot. It was a good game overall and it builds on what we’ve been doing.”

The Cardinals wrap up district play Wednesday when they take on Montgomery County at 7 p.m. in Mount Sterling.

“That’s going to be a big one,” Manning said.