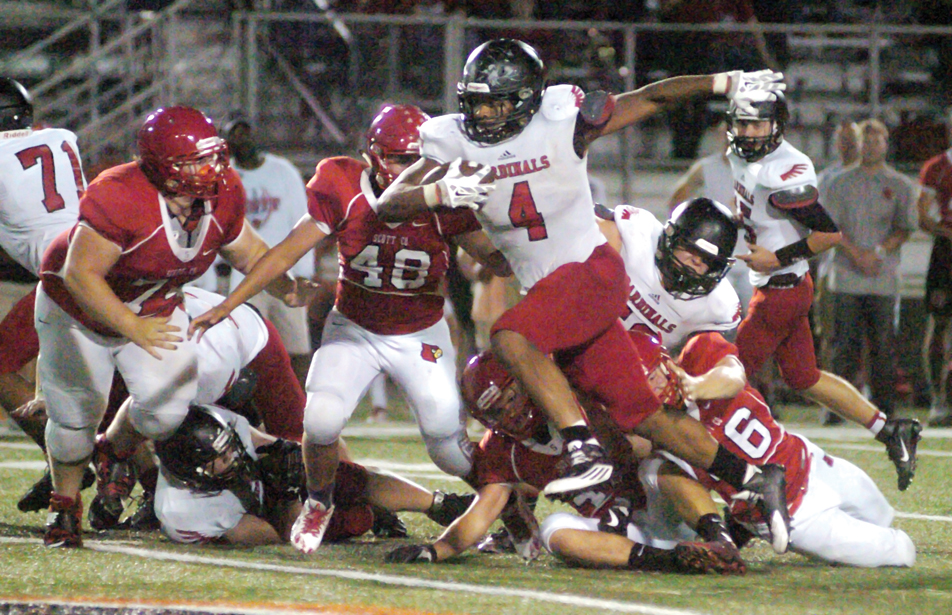 Casey Castle/casey.castle@winchestersun.com GRC’s Ohmante Jenkins fights through a tackle and past the line of scrimmage against Scott County at Toyota Stadium in Georgetown Friday night.

The George Rogers Clark High School football team knew it had a tall order when it traveled to Georgetown Friday night to take on Scott County.

While the Cardinals struggled in the areas where they needed to be perfect in hopes of pulling an upset, they still walked away from the 55-13 loss with some positives.

“They’re (Scott County) a great team and we knew we couldn’t have self-inflicted injuries like turnovers, miscues on special teams and allowing big plays on defense — we had all those things,” GRC coach Mike Riddle said. “That being said, I was really proud of how we continued to fight, continued to battle through and continued to work on getting some consistency on both sides of the ball.”

Scott County returned the opening kick-off 86 yards for a touchdown and didn’t look back, dominating the first half, 49-0.

GRC got bit by the injury bug, too, losing both Ohmante Jenkins and Pearce Nisbet to injury.

Even after getting his ankle retaped, Nisbet was unable to return. Jenkins came back just in time to relief DeDe Knowles, who missed most of the second half.

Still, that created opportunities for the GRC coaching staff to see players in different positions. Will Henry played all but the first series at quarterback, and Jenkins was a big part of a scoring drive in the second half.

“Will came in there and did a nice job,” Riddle said. “He had some good energy. He scrambled and did a good job getting rid of the ball.”

GRC also won the turnover battle. Scott intercepted Henry twice, one returned nearly the length of the field for a socre, but the Cardinals forced and recovered four fumbles.

“We made them put it on the ground four times and took it away from them,” Riddle said. “That’s definitely a positive. In spots, we moved the ball a lot better than we have earlier in the year. We have a lot we can build on.”

Henry was 9-of-25 for 47 yards. Chandler Gray caught two passes for 10 yards. Harrison Crum also picked up 10 yards on a pair of caches.

Nitavius Thomas and Nick Willoughby both had 3.5 tackles to lead the defense. Willoughby recovered one of the fumbles and returned it 30 yards. Tayzon Stewart, Marcus Wiseman and Bradley Shook also recovered fumbles.

Chris Collins and Hunter Dunn each had tackles for loss.

While the two teams differ schematically, Scott County gives GRC a glimpse of what the Cardinals might expect next week when Ryle visits Cardinal Stadium.

“But in terms of competition and caliber opponent, your individual matchups will be similar.”