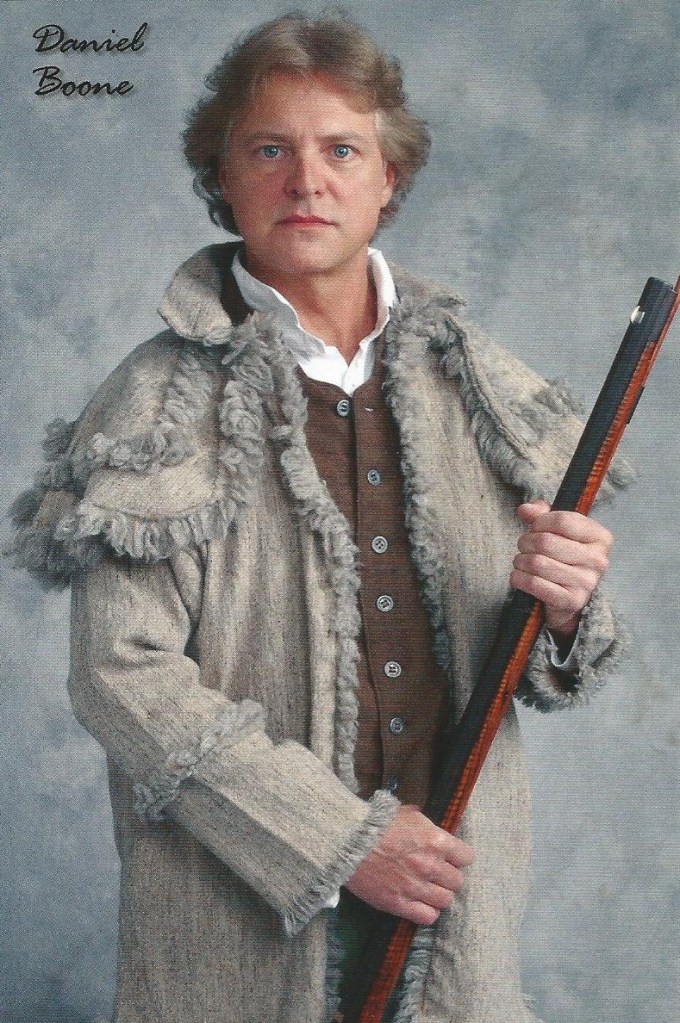 Kentucky’s most famous pioneer recently returned for an evening at the Bluegrass Heritage Museum.

He performed to a capacity crowd at the museum’s Second Thursday program for September.

Most Kentuckians are familiar with Boone’s exploits, though sometimes our “knowledge” is colored by legends that have grown up around him. The television show from the 1960s contributed to inaccurate perceptions, but the legends began in Boone’s own lifetime.

In 1784, John Filson wrote a book called “The Discovery, Settlement, and Present State of Kentucke.” This was basically an advertisement for the glories of Kentucky, an area with rich land and abundant game. Filson’s work included the first published account of Boone’s adventures and introduced a lot of the mythology that grew up around him. The book was popular both at home and abroad. Boone already was well-known in Kentucky; soon he became an international figure.

The facts of his life needed no embellishments. However, they were pretty significant in their own right.

Hardesty portrayed Boone in 1785, a year after Filson’s book was published.

At this time, Boone was operating a tavern in Limestone (now Maysville), Kentucky. He also worked as a surveyor and horse trader.  He spoke to the audience as if he were sharing stories of his life to travelers passing through.

Boone was born Nov. 2, 1734, in Pennsylvania to Quaker parents.His formal education was limited, as he much preferred to be out in the woods hunting.

“Mother Nature was my teacher.Out of doors was my classroom.”

Once, when he was quite young, he went off to trail a bear and lost track of time. A search party found him a day and a half later roasting bear meat.

Boone found the third in Rebecca Bryan, who proved to be a strong and well-matched partner. They had 10 children. By 1785, three of them had died, two at the hands of hostile Native Americans.

In 1773, Boone and others were herding cattle through the wilderness, a slow process. He sent Jamie and some others back for provisions. The small group was attacked, and Jamie and another boy were tortured and killed as a warning to others who wanted to settle Kentucky.

In 1775, Richard Henderson of the Transylvania Company hired Boone to lead a company of some 26 men to blaze a trail, which later became known as the Wilderness Road. Boone was also supposed to smooth out relations with natives they might encounter. The trail led to a point on the Kentucky River where the group built Fort Boonesborough.

One of the most famous events of early pioneer history occurred the next year.

In 1776, 13-year-old Jemima Boone and two Calloway girls were kidnapped by a small band of Cherokee and Shawnee Indians.

Hardesty/Boone proudly described how his daughter, though frightened, kept her head. She claimed the others were her sisters, knowing that the Indians would treat Boone girls carefully.

The girls managed to leave signs along the trail for the rescue party to follow. Boone and others from the fort, of course, did rescue the girls, who ended up receiving nothing worse than scratches and a scare.

“They [the Indians] weren’t unkind as far as savages go; they were just terrible kidnappers. They didn’t lay an unnecessary hand on those girls. They were respectful.”

When Boone led a group of Boonesborough men to the Lower Blue Licks on a salt gathering expedition in 1778, they were surprised by a group of Shawnee led by their chief Blackfish. Boone convinced Blackfish to delay attacking the fort until spring and spare his men. The price? Boone had to run a gauntlet to save his own life.

The pioneers were taken to Chillicothe in the Ohio territory. Blackfish was so taken with Boone that he and his wife adopted him, giving him the name “Sheltowee” which means “Big Turtle. ”Boone found much to admire about the Indians’ way of life and their love of the land. In spite of personal tragedy at the hands of Indians, Boone respected Native Americans.“Side by side with savagery, there’s great beauty to be found in the native culture as well.”

He stayed with them several months, but when he overheard them planning in June 1779 to renew their attack on Fort Boonesborough, he escaped, traveling 160 miles back to the fort in just four days — an extraordinary feat.

He found the fort in some disrepair and his own family gone; thinking him dead, they had gone back to North Carolina.

He rallied the remaining men and built up the defenses so they were as ready as possible when the Indians finally showed up in September.

Blackfish asked to talk with Boone and some others, and the meeting with adoptive father and son must have been poignant. Seeming to strike a bargain, the natives attempted to grab the pioneers and take the fort. But they wrestled away, and there followed a week of constant attack.

The pioneers could hear the Indians tunneling toward the fort, and torches were thrown onto the roofs. Finally, a powerful storm arose, putting out the torches and causing the tunnel to collapse. The next day, Blackfish and his men were gone.

In spite of all he had done to save Boonesborough, Boone was subjected to a court martial.

Some accused him of collaborating in the capture of his men at the salt licks and were suspicious of all the time he spent in the Indian camp. However, he was found not guilty and then given a promotion.

“I wasn’t no traitor to Kentucky; I made Kentucky.”

Several times in the presentation, Hardesty as Boone brought up “Gulliver’s Travels,” one of Boone’s favorite books. During one of his early explorations of what became Clark, Powell and Montgomery counties, Boone and his friends named Lulbegrud Creek after a place in the book.

“Gulliver and me—we weren’t so different,” Hardesty/Boone said. “We both traveled far, we saw much….We were both giants in our own way, too.  We’ll both be remembered, I suspect, not by where we ended up but from where we all went, and why.”

In a question and answer period after the Chautauqua presentation, Hardesty noted one of the most widespread inaccuracies about Boone.He did not wear a coonskin hat, but rather a wide-brim beaver felt hat; it was much more practical (and didn’t smell as much).

Hardesty prepared for over a year and worked with state historian James Klotter to ensure the accuracy of his presentation.  This is in keeping with the Kentucky Humanities Council’s aim of giving “a piece of living history.”

His respect for Boone was obvious.

“I think that he was a great hunter and explorer and a man of passion and tenacity.  I think the most profound quality that Boone had was his ability to get along with other people,” including Native Americans.

People often think Boone was a terrible businessman because he went into debt and eventually left Kentucky for Missouri.

Hardesty stated, “Boone was probably a pretty good surveyor and businessman, but he was so honest that people probably took advantage of him.”

Before he died, Boone actually returned to Kentucky and paid off all his debts.

He said, “Let no man ever say that Daniel Boone died owing any man a nickel.”

The next Second Thursday program will be at 6:30 p.m. Oct. 13. Winchester Police Chief Kevin Palmer, who also serves as the museum’s living historian, will lead an audience interactive program.The program is free and refreshments will be served.