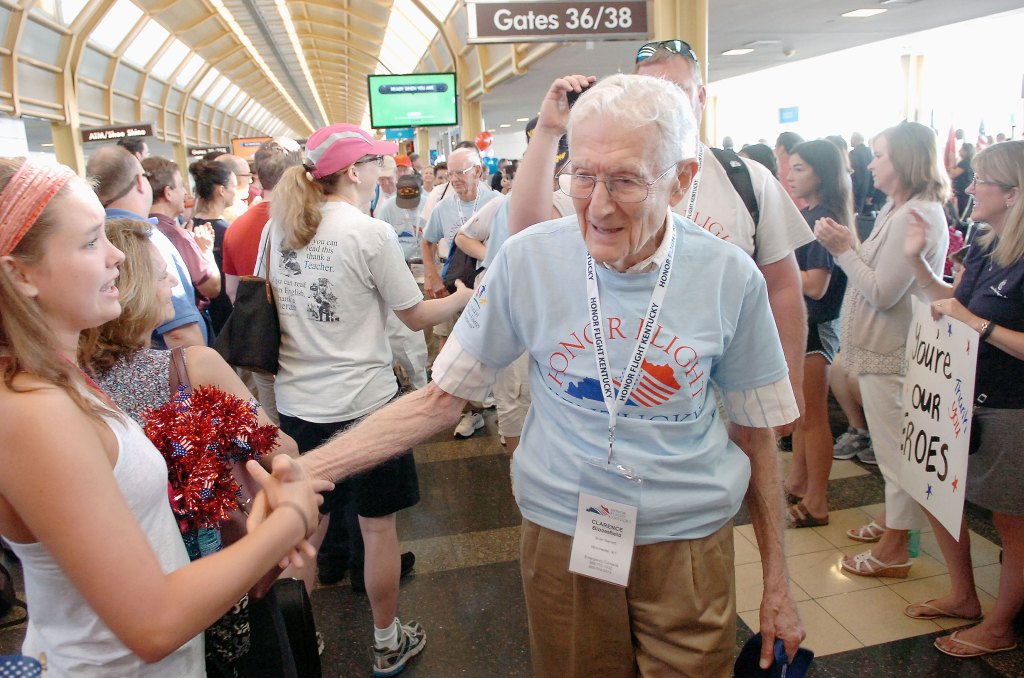 A veteran is greeted during the “Welcome Home” celebration at Bluegrass Airport following a previous Honor Flight. (Sun file photo)

Honor Flight Kentucky will conduct a flight Saturday with a host of veterans from Clark County and the surrounding area.

The newly-formed chapter of the Honor Flight Network flew its first group of 43 veterans in August.

The network is comprised of more than 130 non-profit charitable chapters in 42 states.

Four Clark County veterans will be on Saturday’s flight.

“We have one mission — to send as many of these brave heroes to see the memorials that are dedicated to their service and sacrifice,” George Campbell, Honor Flight ambassador and board member, said. “Many of the veterans say it’s one of the best days of their lives.”

Saturday’s flight is sponsored by Toyota Motor Manufacturing Kentucky, and will be the largest flight from Lexington so far, Campbell said.

Participating from Clark County are:

— Gareth Adams, a U.S. Army veteran who served in Vietnam for 21 months from 1967-69. Adams said he worked as a radio repairman. Adams’ niece, Cassandra Stevens of Georgetown, will be his guardian on the trip.

— Norman Rose, a U.S. Army Veteran serving from 1967-70. Rose, who was a Green Beret, served directly in Vietnam as an infantryman as a lightweight weapon leader. Rose said he was wounded three time while serving in Vietnam. Rose’s son, Eric Rose of Winchester, will be his guardian.

— Ralph Thompson, a U.S. Navy veteran who served from 1965-68. Thompson was on an aircraft carrier about 100 miles out from Vietnam, he said. He said during his time in Vietnam, a two-man crew disappeared  from radar.

“They evidently were hit by a missile,” he said. “I really want to see their names on the wall while I’m on this trip. I’ve wanted to go all these years.” Thompson’s son, Steven Thompson of Winchester, will be his guardian.

— Clair Hunter, a U.S. Marine Corp veteran who served from 1952 to 1981. Hunter served during the Korean and Vietnam wars doing special intelligence and electronic warfare, he said. Hunter’s friend, Elizabeth Scalia of Winchester, will be his guardian.

Julie Hale, a teacher at Baker Intermediate School, will participate in the flight as a guardian for Jack Strange, of Powell County. Hale’s chaperone costs were covered by Winchester Federal Bank, the school’s Partner in Education. Other guardians from Winchester include Michael Hillard, Dona Ginter, Amy Pack and Crystal Young.

Jeffrey Hohman of Winchester will be the flight director.

Following the Honor Flight, a “Welcome Home Celebration” will take place at Blue Grass Airport. Those interested in taking part in the celebration are asked to arrive by 9 p.m. at the airport. Shuttles will be available for overflow parking.