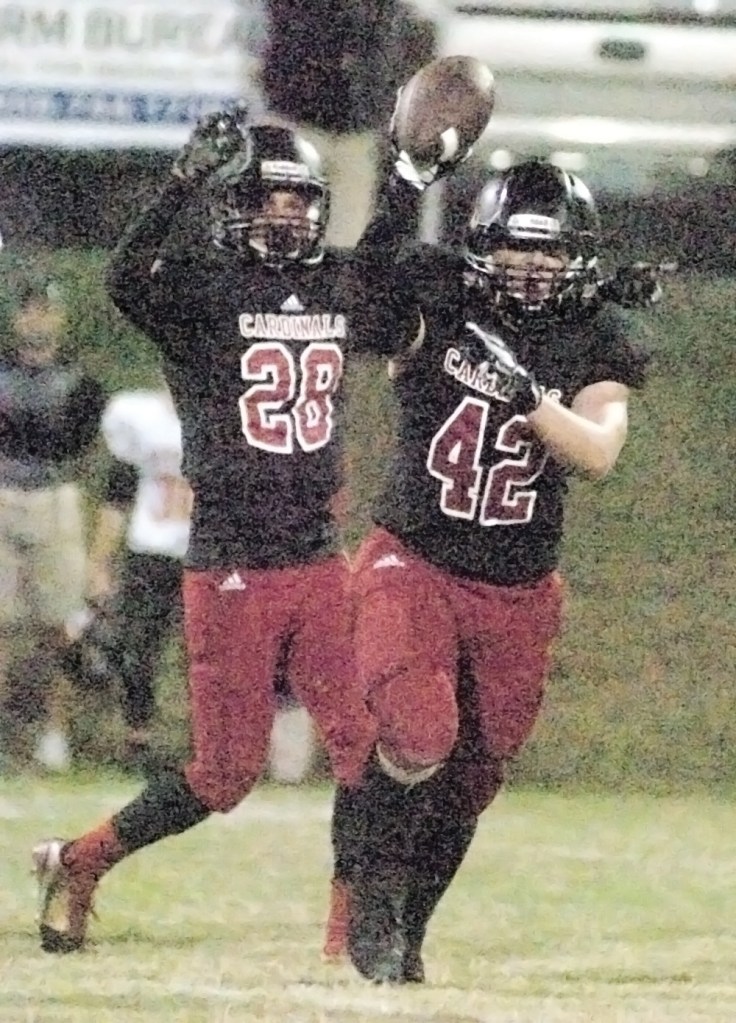 Casey Castle/casey.castle@winchestersun.com GRC’s Austin Blairs raises the ball after recovering a fumble in the first half Friday night at Cardinal Stadium. Isaiah Railey, No. 28, looks on.

The George Rogers Clark High School football team is in the middle of one of the toughest three-game stretches any team has faced this season.

“There’s not been a tougher three-game stretch in my mind,” GRC coach Mike Riddle said. “But it is what it is. You can boo-hoo and worry about it, but I’m not wired that way. In the end, I want these guys to have success. I want them to be successful in their lives.

“I’ve always had the philosophy that football is life marked off in 100 yards. There’s going to be times you face adversity. It comes down to what you choose to do when that adversity hits you.”

The points came early and often for Ryle, who scored all but one of its touchdowns in a furious first quarter.

The Raiders scored on a 14-yard rush by Jake Chisholm then a field goal. They led 38-0 just a minute into the second quarter.

They took advantage of GRC’s miscues, returning an interception for a touchdown and turning a busted play into a touchdown when quarterback Tanner Morgan scrambled for a score.

“You just can’t have the self-inflicted mistakes that we had and even be in the ballpark with a team like that.”

Still, the Cardinals came out ready to play for the second half. They forced a handful of turnovers, drove for one touchdown and were moving the ball downfield for another when time expired.

“I challenged them at halftime,” Riddle said. “Everything this sport teaches you, to me, applies to your life. You have two choices. You can quit, give up and succumb to the adversity or you can find a way to pull it together and be accountable.

“That might sound like coach-speak, but I was really proud of how our guys came out in the second half and had some pride. They executed. They created turnovers and continued to make plays on defense. They had some positive things going on offense.”

GRC scored on a four-yard keeper by Pearce Nisbet.