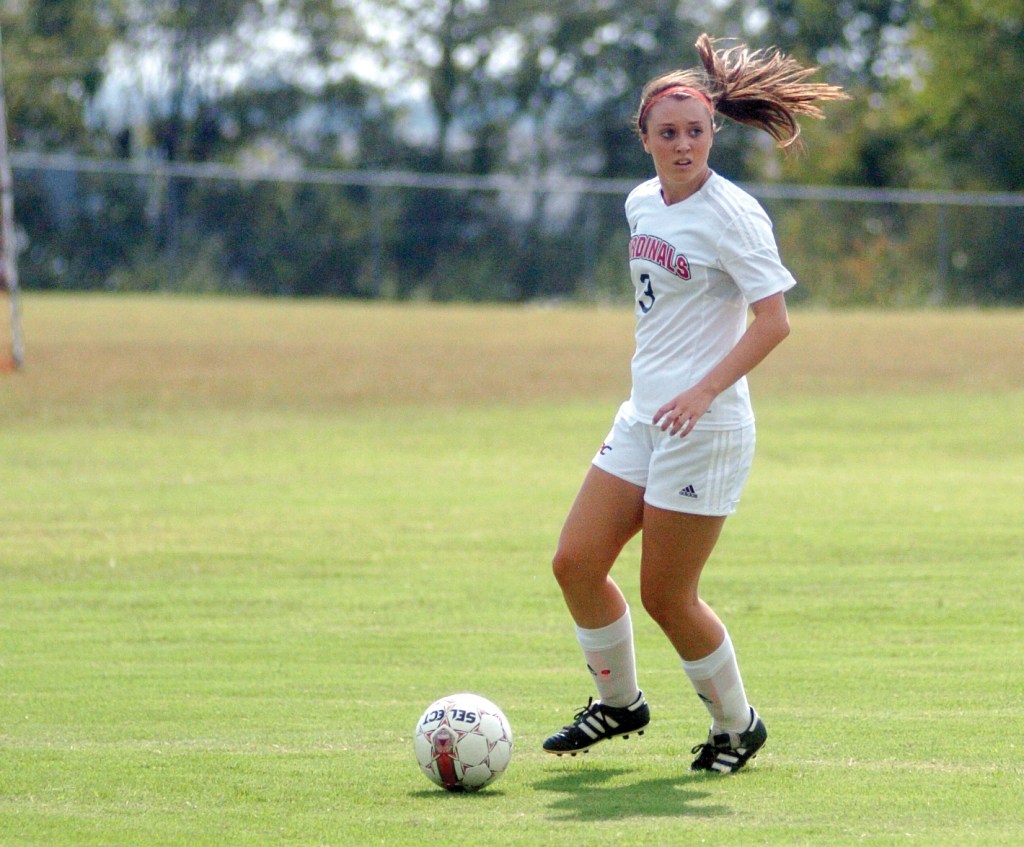 Casey Castle/casey.castle@winchestersun.com Emily Caudill and the George Rogers Clark High School girls soccer team are No. 18 in the latest poll. Tonight they face Montgomery County in Mount Sterling for the top seed in the district tournament.

It’s a big week for the Cardinals.

On the line is the top seed in the 39th District Tournament.

“This game will either get us the No. 1 seed or if Montgomery County beats us, there will be a three-way tie,” GRC coach Matthew Abner said. “Not sure what the tie-breaker system is, but thing is to win.”

Winning is something the Cardinals (10-2-2) have done quite a bit lately. They have won six straight games — allowing just one goal over that period — and haven’t lost in nine games.

And the Cardinals have done it by dominating opponents offensively and defensively. They are 20th  in the state with 4.6 goals scored a game and 16th in average goals allowed with .8.

Combined, they have an average margin of victory of 3.8 which is 13th best in Kentucky.

That has moved GRC into the state’s Top 20 for the first time since Abner took over the program four years ago.

GRC is No. 18 in the most recent Maher Rankings, released Sept. 24.

Abner said the Cardinals achieved it by buying into a team-first mentality.

“We’re pretty talented skill-wise,” he said. “But we were last year and the last couple years, too. They’re learning to play together and work hard whenever they step on the field for every game and every practice.

“And some players are helping us with how they work in practice and in the games, and it pushes other players to work that hard, too.”

And that says as much about their drive to win as it does about the players themselves.

“The character of this team is definitely one of its advantages,” Abner said. “We talk a lot about the process and how we play. We’re not focusing on results. Our thought is if we’re doing everything right, we’re going to have good results.

“We work on our moral skills as well as the physical. Our focus is more character-based. The hardest thing we had in the past was to get the players to understand their world and what they need to do and not get so tied up in a ‘me first’ mentality. It’s about the team.”

Getting the players to buy into the team dynamic wasn’t the only piece to the puzzle. Some early season  changes moved the Cardinals from a 2-2-1 record to 8-0-1 since. Those first five games also saw the GRC defense give up nine of its 11 surrendered goals.

“We made some adjustments through the beginning of the season,” Abner said. “We switched formations and moved girls around quite a bit. We had some inconsistency and now that we’re playing with some consistently, we’ve stuck with one formation and switch it if we are struggling or the other team is doing really well.”

But as soon as the Cardinals move to a Top 20 ranking, it’s going to be tough to keep. GRC travels to No. 7 Newport Central Catholic Saturday then No. 5 Henry Clay next week.

Between those, they face region opponent Harrison County at home.

“I’m proud of the girls,” Abner said. “That’s something I don’t want them to focus on. We still have Montgomery, which is a big game for seeding and after, we have Newport Central Catholic and Henry Clay nex tweek. If we get caught up in it, it can get in our heads. Then we get whupped and we’re not in the top anything.

“Our focus is is on what we need to do for the next game.”

“They have good balance,” he said. “They play the ball over the top pretty good where we try to control it through the midfield.”

The Indians are coming off a tie with Collins, 2-2, at home Monday night.

But whoever the opponent is for the Cardinals over the next week in their hunt for a top seed and keeping a Top 20 ranking, the focus will always be on themselves.

“Our approach is to worry about us,” Abner said. “We’re going to improve on what we’ve done each game.”