Nailed it or failed it: Can chicken be addicting? 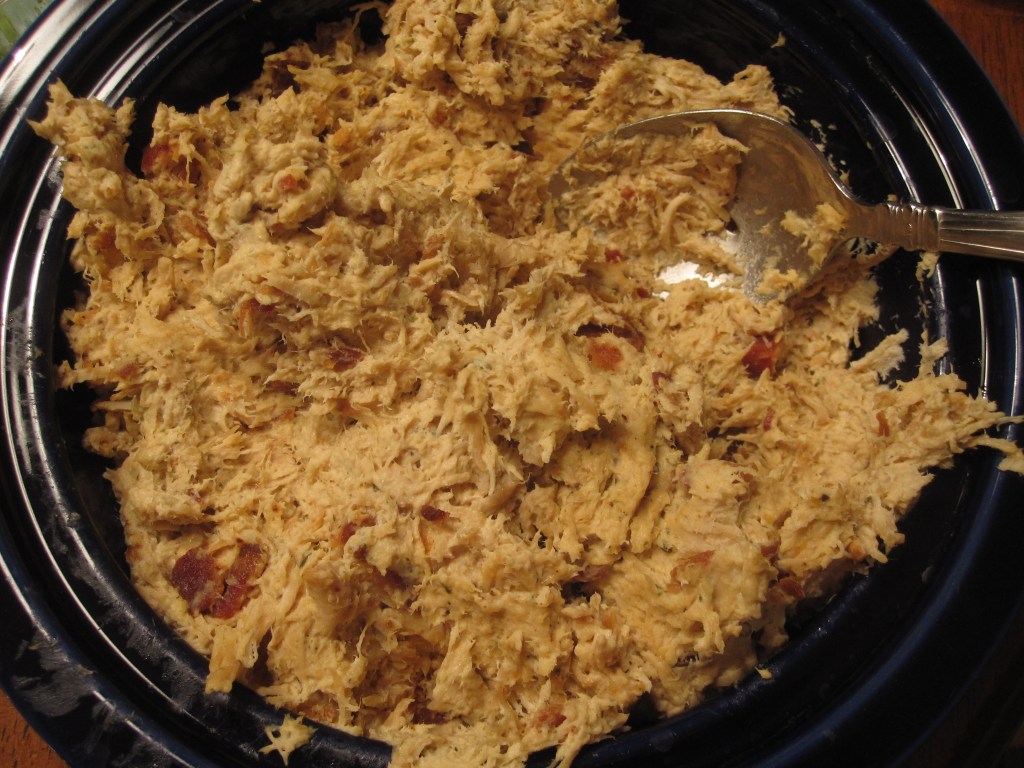 The final product is almost addicting.

While at the grocery the other day I ran into Deatta, an old friend, and after catching up a bit she suggested I prepare something easy for my weekly column. I decided then and there I’d do just that. When I got home I remembered seeing a recipe on Facebook for chicken breasts done in the Crock Pot. I’d printed the recipe out for future use and decided to go ahead and try it in honor of Deatta, who by the way is a wonderful cook, but needs our thoughts and prayers as two immediate family members are dealing with cancer.

The recipe is called Slow Cooker Crack Chicken and was found at cookiesandcups.com/easyrecipe:

Cook on low for 6-8 hours or on high for 4 hours, until chicken shreds easily.

Once chicken is shredded stir with a large fork or spoon, so all the ingredients combine.

After cleaning the chicken (I used five boneless chicken breasts which was little more than 2 pounds). I placed it in the bottom of my Crock Pot, which I’d sprayed with Pam cooking spray. I then opened the refrigerator to get the cream cheese and could only find one 8 oz. package. Not sure what I was going to do I began digging around in the refrigerator. I’m always telling Brad our refrigerator is too small because it’s always full and there is no room for anything. Finally found another package – thank goodness. I then put the two 8 oz. blocks of cream cheese on top of the chicken and sprinkled it with the one packet of Ranch seasoning I had. While reading this recipe on-line I noticed that some people made their own Ranch seasoning and because I only had one packet of the stuff I decided to make my own for the second packet. We can thank Anna who provided the Ranch Seasoning recipe in the comments section of the Slower Cooker Cracked Chicken recipe.

The recipe for Ranch Seasoning is:

Mix together in mini grinder or blender. Store in airtight container. 1 tablespoon of mix equals 1 envelope of Ranch mix.

This seasoning was easy to put together; however I didn’t have celery salt. I did have celery seed so I just used that instead. I didn’t think a little less salt in the mix would hurt anything. As a matter of fact, it’s probably better for you. Also, I don’t have a grinder and didn’t want to dirty the blender so I just mixed everything up and sprinkled a tablespoon over the chicken and cream cheese. I placed the remaining seasoning in a small mason jar to store it. I don’t use Ranch seasoning very much I put the lid on the Crock Pot and because it was about 1:30 I set the timer on high. After an hour, I turned it down on low for another 4 hours.

While the chicken was cooking I cooked the whole pound of bacon. I cook bacon in the oven to avoid all the spattering (cover it with parchment paper) and for easy clean-up. We love bacon and I thought if a little bit is good in this dish more would be better and I was right.

Also while the chicken was cooking I remembered our neighbor, Rachel, had told me the easiest way to shred cooked chicken was to use my stand mixer. Just put the chicken in the bowl, insert the paddle attachment and turn the thing on and it will shred your chicken in a matter of seconds. Rachel uses this method to make chicken salad. Rachel’s family says her chicken salad is the best, but I wouldn’t know because I don’t eat chicken salad —I don’t like mayonnaise. So I spooned the chicken, cream cheese, and seasoning mixture into my bowl. There was some liquid left from cooking the chicken and I opted not to add it to my mixing bowl. Turned the mixer on and in no time the chicken was shredded. I couldn’t believe it was so fast. If you are not careful I think it could turn into a baby food consistency real fast. I crumbled all that wonderful bacon and stirred it into the mixture.

When everything was on the table and we were ready to eat I was anxious to try this dish. I took one bite and told Brad I believed I’d found my new favorite chicken dish and he agreed.

One suggestion the author of this recipe suggested was to serve the chicken on a bun, adding your favorite cheese and broiling it until the cheese melts, then eating.

I think this chicken dish could also be served on crackers as an appetizer, or in tacos, or on a salad, or any other number of ways you could dream up.

I definitely nailed this recipe and look forward to making it again. It’s so simple and easy. Thank you Deatta for suggesting an easy recipe this week.

When your art develops a life of its own