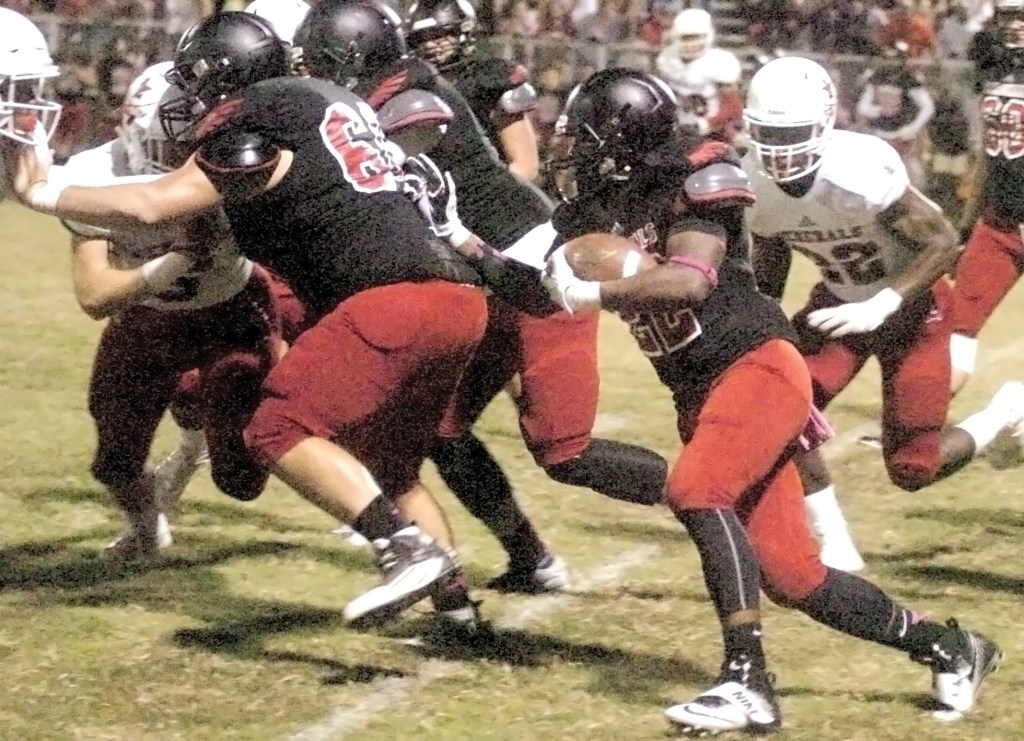 Casey Castle/casey.castle@winchestersun.com GRC’s DeDe Knowles, No. 22, follows his blockers past the line of scrimmage Friday night at Cardinal Stadium against Lafayette.

The past three games have been a difficult patch in the schedule for the George Rogers Clark High School football team.

Still rebuilding, the Cardinals have struggled this season but getting wins against Scott County, Ryle and Lafayette would have been a tall order for even the healthiest of programs.

After the Cardinals’ defeat at the hands of the Generals, 40-0 — the first scoreless game of the year for the Cards — GRC hoped to be mostly healthy going into the final three games of the regular season.

“After that stretch, injuries and being healthy are one of the first things we’ll look at it,” GRC coach Mike Riddle said. “We’ll have to evaluate and see where we are personnel-wise.”

After the third straight game with a running clock, the morale of the Cardinals might be in question, but GRC has continued to focus on improving and striving to find consistency on both sides of the ball.

“You can’t play a Top 5 team in the state and have the miscues we had and expect to be in the game,” Riddle said. “It’s not realistic. On the bright side, there were times when we had poise, focus and technique about us and we did some promsing things we can build on.”

And that’s where the Cardinals will continue to focus as it prepares for two road games — against Tates Creek and Madison Central.

“You have to take an honest assessment of where you are,” Riddle said. “Right now, we shoot ourselves in the foot and that’s something we have to continue to clean up. Some of that comes with new and younger guys playing (in place of injured players).

“A significant part of that is just growing pains, but getting those kids to understand when we’re focused and have confidence in the scheme and the system, we make plays, we catch balls, we wrap up and make tackles.”

Now the Cardinals are trying to stretch those periods of success into longer ones to build on.

“We do those things in increments,” Riddle said. “Then we do them in longer stretches. Then those turn into drives and into quarters and games and that’s where your ultimate progress is going to be more evident.’

Despite the lopsided score and Lafayette’s pressure defense, running back DeDe Knowles rushed for 58 yards on 16 carries — including a 21-yard run — most of which came against the Generals first team on defense.

While the road gets a bit easier for the Cardinals, at least in terms of moving away from the top level of competition, it doesn’t get easier by much.

GRC travels to Lexington next week to take on Tates Creek, which is coming off a 50-14 loss at Madison Central. But the Commodores had won four straight before that loss, averaging 43 points in those victories.

“Creek is an outstanding team,” Riddle said. “I think they’re as good as anybody. So once again, it will be a tough task. We’ll have to get to work and get ready.”