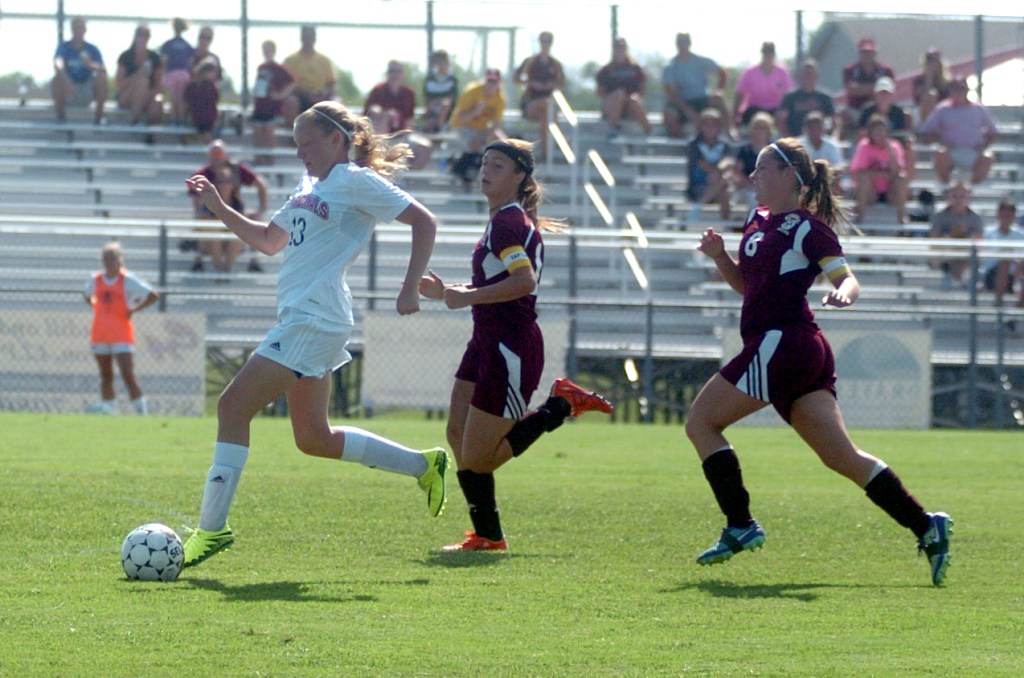 Casey Castle/casey.castle@winchestersun.com GRC’s Shannon Ramey and the Cardinals have the top seed in the 39th District Tournament and their eyes on a title.

Winchester will be home to the 39th District Tournament starting Monday and both George Rogers Clark High School teams will look to capture the district crown and punch a ticket for the 10th Region Tournament.

Two games will be played each on Monday and Tuesday, with the girls games starting Monday. The championship game for the girls will be Wednesday and the boys Thursday.

All games will be played at the GRC Soccer Complex at Strode Station Elementary School.

GRC (12-4-2) goes into the girls team with the top seed securely in hand. The Cardinals haven’t just been the top of the district, but also the region, undefeated in both (3-0 district, 6-0 region).

After starting the season 2-2-1, the Cardinals went on a 10-game undefeated streak, allowing just two goals over that span.

They’ll face Paris in the opening round, with kick-off set for 5:30 p.m. Paris has struggled all season going 0-17-2 and scoring just five goals while allowing 103.

The Cardinals will continue to rely on their balanced attack and considerable depth. Shannon Ramey has a team-high 21 goals on the season. Delaney Manning and Emily Caudill each have nine while Haley Hannan and Darby Manning have seven apiece on the year.

Hannan leads the team with 12 assists. Darby Manning has seven on the year.

Brennan Woosley and Laura Martin typically split time in goal for Cardinals, so Woosley has only three clean sheets, but GRC held 12 opponents scoreless in 2016 — including all three district foes.

Bourbon County goes in the tournament looking nearly as sharp as the Cardinals. The Colonels have the best record in the region at 14-3-1. They’ve allowed just six more goals than GRC.

But the Cardinals defeated Bourbon at home earlier this season, 3-0, while in the middle of their 10-game streak.

If the Colonels want a rematch in the title game, they will have to get past Montgomery County.

The Indians also had a strong season at 11-8-2 and are coming off wins over Boyd County and Scott County to wrap up the regular season.

The Indians and Colonels are set to face off in the second game Monday night, which is scheduled for 7:30.

The Cardinals (8-7-4) were pretty close to having the top seed in both tournaments. The boys were tough-luck losers against Bourbon County at home in a game that went to penalty kicks.

The Cards will likely want revenge and a spot in the region tournament, but to secure either of those, they will have to beat Montgomery County.

The Cards did that during the regular season with a 2-0 win a month ago a home. GRC gets the Indians at home again, Tuesday night at 7:30 p.m.

GRC will be led by Clayton Parks and Josh Bailey offensive, who both lead the team with 13 goals apiece this season going into yesterday’s contest at Highlands.

Montgomery (8-11) will have the same goals in mind, particularly after losing 3-2 at Bourbon County in double overtime Sept. 15.

The Colonels (10-7-1) start the tournament against rival Paris at 5:30 p.m., but they will have to turn things around if they want to return to the district championship game.

Since defeating GRC on PKs on Sept. 20, the Colonels are winless with a 0-5-1 record over their past six games. They’ve scored just once in those six games.

And Pairs (5-11-3) doesn’t look the part of a doormant either. While the Greyhounds were 0-3 in district play, they were only outscored 5-0 in thos games.