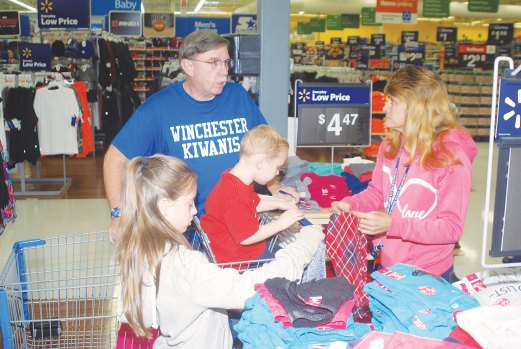 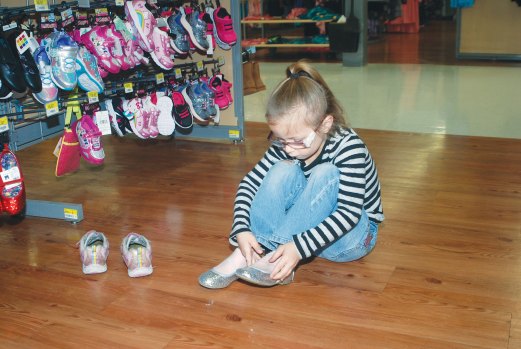 Fred Petke/fred.petke@winchestersun.com Nevaeh Bolton tries on a new pair of shoes Saturday morning during the Winchester Kiwanis Club's Walk with a Child event at Walmart. The club raised about $14,000 to purchase clothes for up to 181 Clark County children.

Families lined up as much as an hour and a half early Saturday morning while members of the Winchester Kiwanis Clubs set up its annual Walk with a Child.

Club members spent more than a year raising about $14, 000 to take about hundreds of children shopping at Walmart for school clothes, club member Russ Morrison said. They raised enough to take 181 children shopping, he said, though about 150 were expected to attend.

Still, an hour after the event officially began, there was a long, long line of families waiting their turn to go shopping. Each family was accompanied by a club member or volunteer as they went through the store.

“Well, my princess, I know where you need to do,” volunteer Cindy Banks told one little girl before embarking. “There’s all kinds of girly stuff over there.”

And off they went, looking for girly clothes. Others wanted to look for shoes. Others got winter coats.

“Everything we do is for the kids of Clark County,” club member Bob Jackson said while pairing families with volunteers.

The Winchester club has done this event for at least 40 years, he said.

Each child had $80 to spend for clothes, be it coats, pants, socks, shoes or whatever they and their parents, grandparents or great grandparents agree on.

Officials at the preschool and the four elementary schools recommended children with needs to the club, Morrison said. With about 30 club members and volunteers on hand, it was a busy morning. After delivering a family to the checkout line, they picked up another for the next trip through the store.