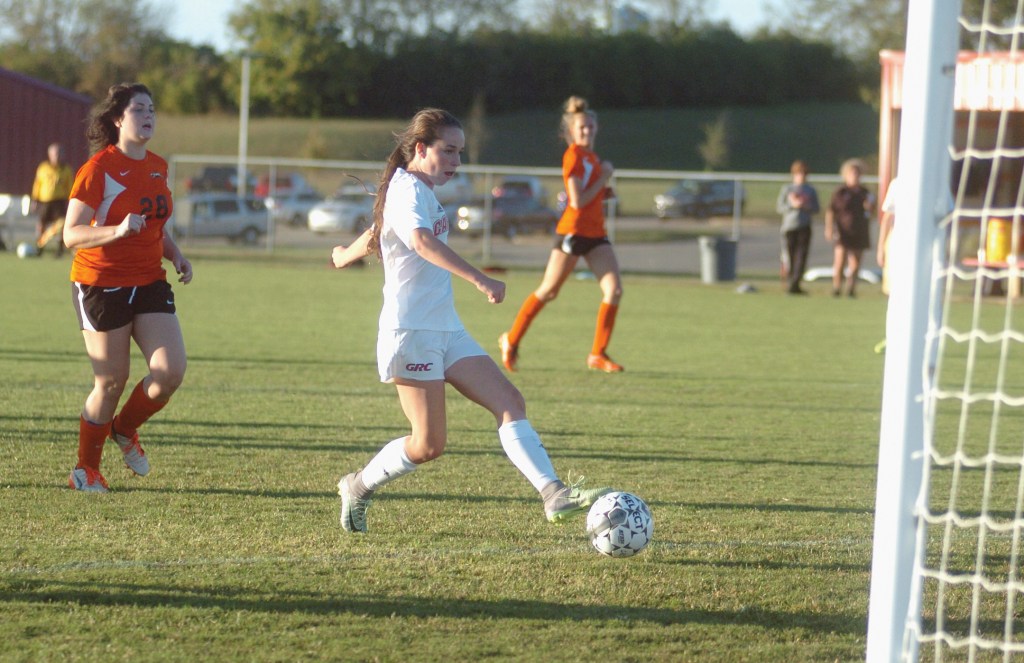 Casey Castle/casey.castle@winchestersun.com GRC’s Meaghan Curren fires a shot past the Paris keeper in the first half of the Cardinals’ 10-0 win in the opening round of the 39th District Tournament Monday night in Winchester.

The George Rogers Clark High School girls soccer team made short work of Paris in the first round of the 39th District Tournament Monday.

In the truest sense.

The Cardinals scored in the first five minutes of the second half to make it 10-0 and earn the mercy-rule victory.

The win pushes the Cardinals (13-4-2) into the championship game Wednesday night in Winchester.

The Cardinals pressured Paris, who never managed to mount a scoring threat, for the majority of the game. The season ends for the Greyhounds (0-18-2), who have won just once in the past two seasons.

“They do as well as they can to compete in our district wtih the numbers they have,” GRC Matthew Abner said.  “They’re playing a 6A school. We have a lot more kids. I understand where they are and where they are coming from. I hope the best for them, but today we were the better team.”

The Cardinals move on, now turning their attention to Bourbon County (15-3-1). The Colonels defeated Montgomery County Tuesday night, 3-0. The Indians finish the year 11-9-2.

The Colonels and Cardinals meet in a rematch of last year’s championship game — which Bourbon won , 1-0.

It was the first time since 2010 the Cardinals didn’t claim a district tournament title. Since moving to the 39th in 2012, the Cardinals have won three of four district championships.

While they hope to bring the trophy back to Clark County, the Cardinals are also pleased they earned a spot in the 10th Region Tournament.

“You can only control so much,” Abner said. “You can’t control what the girls are going to do on the field. You can sometimes have letdowns, even when you try not to. And even if you’re confident, nerves are still there. So there’s some relieve knowing you’re through to the region.

While the Cardinals know they face Bourbon — a team they defeated 3-0 at hom on Sept. 19 — with the start scheduled for Wednesday at 6:30 p.m., they are ready whoever the opponent is.

“We’re going to come out and play our game either way,” Ramey said.

“We’ll prepare the way we always preapre,” Abner said. “The process is always important to us. The wins and losses are uncontrollable, but how we prepare for the games is what we’re more interested in.”

The boys district tournament begins tonight when Bourbon County takes on Paris at 5:30 p.m. and host GRC faces Montgomery County after. The title game for the boys tournament is set for Thursday night.