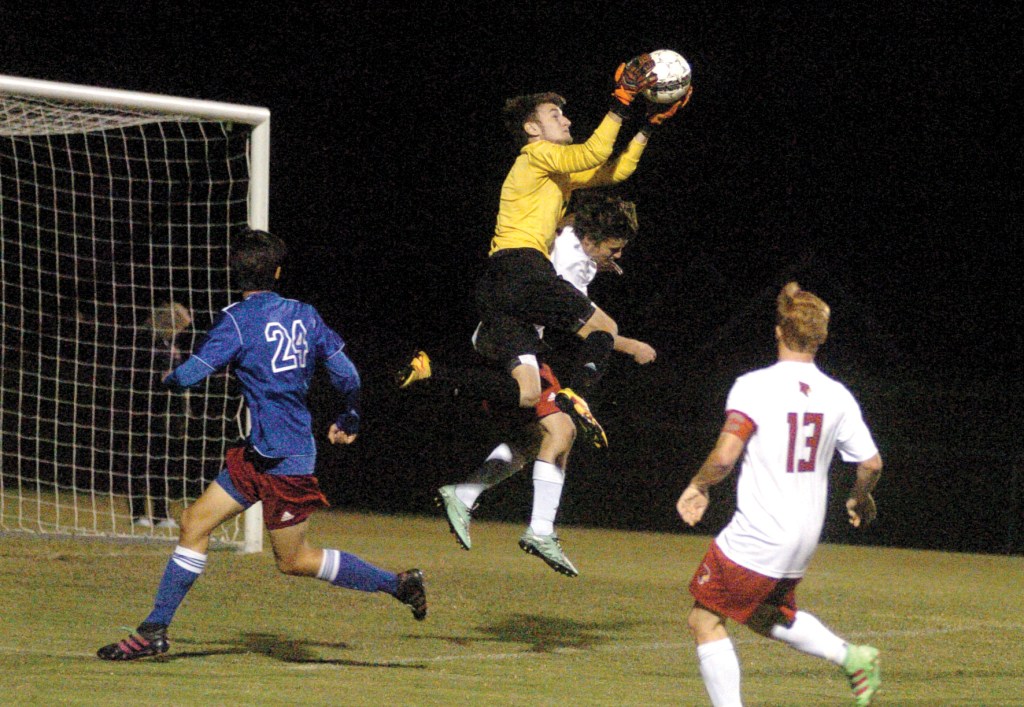 Casey Castle/casey.castle@winchestersun.com GRC’s Evan Carrington collides with Montgomery County keeper Dylan Covington while Montgomery’s Daniel Shelton, No. 24, and GRC’s Landon Lowert, No. 13, look on. The Cardinals lost 3-2 in the opening round of the 39th District Tournament Tuesday in Winchester.

Just minutes into the second half, there was a scrum in front of the Montgomery County goal. After the ball bounced around, it ended up in the back of the net, and while the score only tied the game for the George Rogers Clark High School boys soccer team, momentum seemed to be completely on the Cardinals’ side.

For the next 10 minutes, GRC battered and pressured the Montgomery defense.

But the Cardinals didn’t score again, and when GRC stretched too far, the Indians used the opening to counter attack. Just like that, the momentum was gone.

Montgomery held on for a 3-2 win, to dash GRC’s hopes of advancing to the title game and the 12th Region Tournament.

“Zach Hill came ready to play and they fed off him,” Ridener said. “He just killed us. He out-played everyone we had out there tonight.”

It was a night of upsets, as the No. 2 seed Cardinals and top-seeded Bourbon County both fell, leaving Montgomery County and Paris to meet in the title game Thursday night.

The Indians broke a scoreless in a back-and-forth game with 14:31 left in the first half. The Cardinals tied the game in the chaos in front of the Indians’ net five minutes into the second. The Indians added another with four minutes left.

Josh Bailey gave the Cardinals a bit of life with two minutes left, squeezing a goal between a pair of Montgomery defenders.

“It was a great,” Ridener said. “Well played. Officiating was good. It was even both ways. We just couldn’t finish.”

Ridener said he hopes the program’s upward trajectory the past couple of years will continue. He said he expects it will. The Cardinals graduate a trio of seniors — Evan Carrington, Landon Lowry and Cameron Mitchell, all key players — but Ridener said there are young players ready to step up.

“Next year should be a good year for us,” he said. “We’ve got quality players on the bench. Hopefully we can keep everyone together. Hope we can get them playing early and get them to buy in on what I want to sell.”

“We couldn’t get things on track,” Ridener said. “Since then — this is maybe our fourth loss. This whole season could have been different for us. We played some good teams. And we played a lot of games. Maybe we just got tired (at the end).”