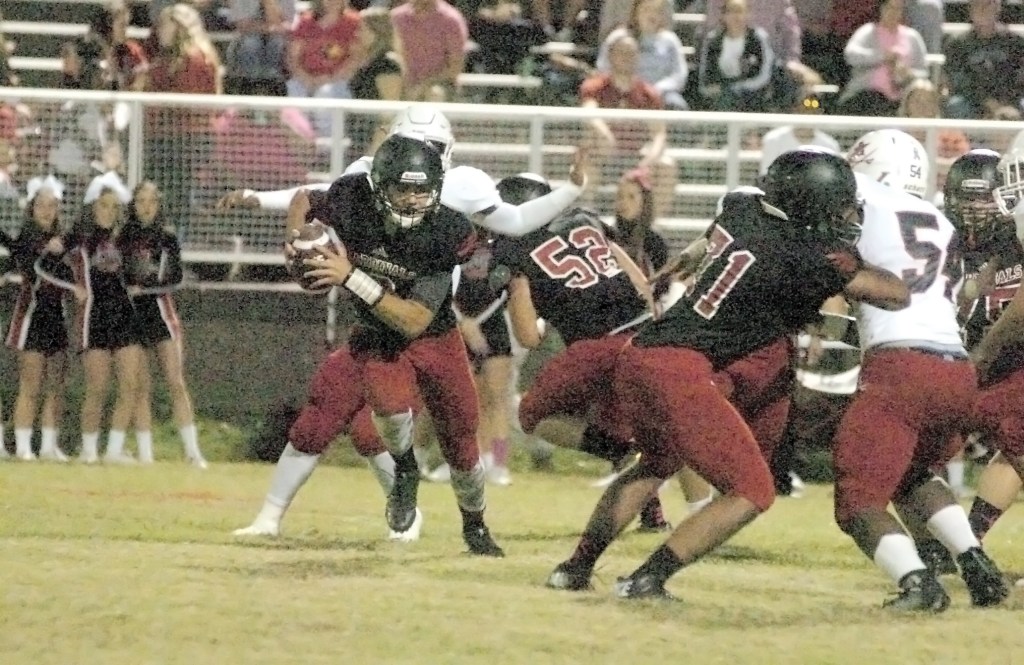 Casey Castle/casey.castle@winchestersun.com GRC quarterback Pearce Nisbet scrambles out of the pocket last week against Lafayette in Cardinal Stadium. The Cards head into the final three games of the regular season hoping to establish consistent performance on both sides of the ball.

As a football season progresses, teams must contend with attrition. Some teams benefit from depth — or luck.

The George Rogers Clark High School team has turned to its bench, tapping into its roster to replace players lost to injury.

The changes in lineup and use of younger or inexperienced players can slow how a team finds rhythm.

“And they’re cutting their teeth on Ryle, Scott County and Lafayette. There’s going to be a bit of a learning curve.”

Those three teams are a combined 19-3 and represent the past three games for the Cardinals (1-6). GRC hoped to get through the tough stretch against three of the state’s best programs without too much injury.

And while Tates Creek (4-3) isn’t quite as good as the three powerhouses the Cards have faced recently, the Commodores are still a solid team and a tough road test for GRC.

The Commodores are coming off a 50-14 loss at Madison Central last week but had won four straight prior to that, including a 44-0 win over Henry Clay and a 48-27 win at Bryan Station.

“Anytime you can do what they did to Bryan Station, that says a lot of what they can do athletically,” Riddle said.

Tates Creek is led by quarterback Cameron Workman, who has 1,644 yards and 18 touchdowns passing this season. He spreads the ball around to a number of receivers, but prefers to throw to Jason Beerman (665 yards receiving) and Turner Gentry (569).

“They’ve got a couple really tall receivers out on both edges,” Riddle said. “It’s impressive how many long balls they are able to throw and complete to get explosive plays off. The quarterback is efficient. The line does a good job blocking for him. A lot of times he can throw it up and they find a way to come down with it.”

The Cardinals suffered their first shutout of the season last week in a 43-0 loss to Lafayette. But GRC had one of its best rushing games against the Generals’ first-team defense.

Riddle said he hopes the team can start to expand those periods of success into longer and longer stretches.

“We did a much better job running the ball last week,” Riddle said. “We’re hoping to build off that and grow our run game. No new plays or new schemes, we’re just trying to be more consistent.”

With the Generals proclivity for throwing the ball, the Cardinals will look to use one of their strengths this season — turnover margin — in their upset bid.

“Defensively, we’ve been pretty good at times, especially with our takeaways,” Riddle said. “Now we just have to put those runs together to the point where we’re playing more consistent defense.”

The Cardinals and Commodores kick off at 7:30 p.m. in Lexington today.