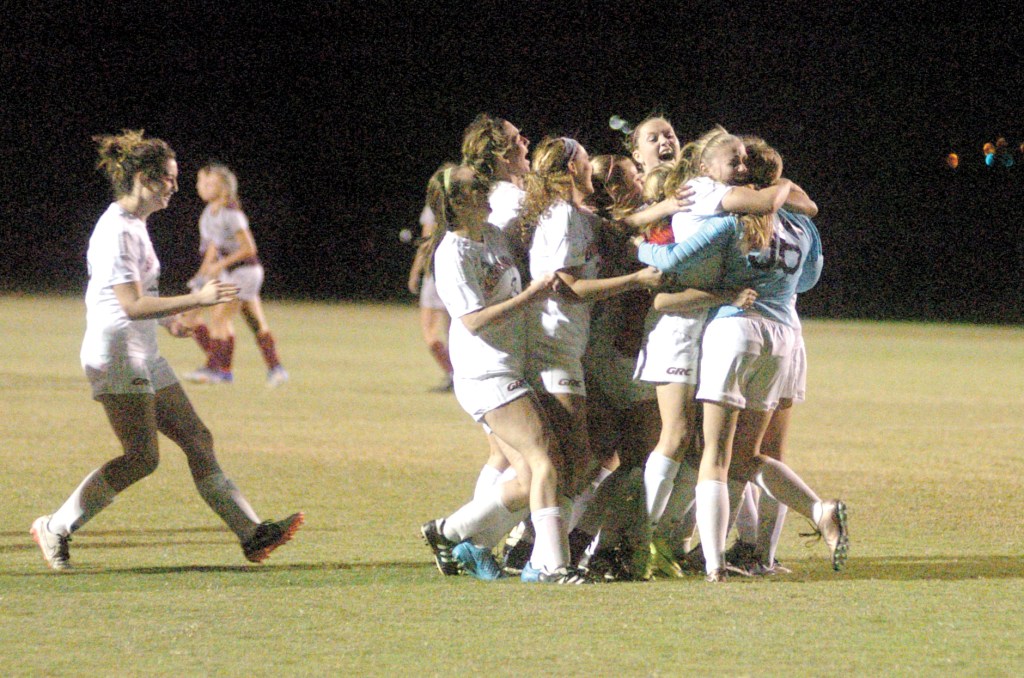 Casey Castle/casey.castle@winchestersun.com GRC’s Allison Honaker, left, races to join her teammates as they celebrate at midfield after defeating Bourbon County in penalty kicks, 1-0 (5-4), for the 39th District Tournament Championship Wednesday night in Winchester.

The top-seeded George Rogers Clark High School girls soccer team was content with firing shot after shot at the Bourbon County goal. The Colonels were happy to bend, but not break, then attempt to counter-attack.

Neither strategy bore fruit. So after a scoreless regulation and overtime, the 2016 champ was crown after penalty kicks. The Cardinals won, 5-4, securing their return to the top of the 39th District and a better position in next week’s 10th Region Tournament.

“That’s the way they play,” GRC’s Haley Hannan said. “They have two really good forwards and they try to hit them, then they have good defenders as well, so it’s hard all around.”

While the Colonels did have some counter-attack opportunities none of them really threatened the GRC goal thanks to the play of the Cardinals’ defense, anchored by Meahan Curren, Taylor Kelly and keeper Brennan Woosley.

“I knew it was going to be a tough game,” GRC’s Darby Manning said atter the game while clutching the 39th District Tournament trophy. “We just played our hearts out. We did everything we could and ultimately it came down to PKs, and we just did what we needed to do.”

Through the first half, the Cardinals controlled the pace of the game, keeping the ball on Bourbon’s half and pressuring the defense. GRC coach Matthew Abner leaned on his team’s depth, substituting often. Bourbon coach Jeff Jett leaned on his club’s defense and keeper Kennedy Hensley to keep the Cardinals barrage from finding the back of the net.

“It was a tough one,” Abner said. “We had opportunities. They (Colonels) were tired. We just didn’t finish in regulation. That’s why we prepare with PKs, so in that situation we don’t give them the advantage.”

Abner opted to switch his keepers for the PKs, using Laura Martin to relieve Woosley, who had been on the field for both the regulation and overtime portions of the game.

“We’ve worked so hard on PKs,” Abner said. “Last year, we went to nine or 10 PKs. So that was one of the focal points for us. We wanted to be ready. Both of our goalies are very good at PKs. I went with the more fresh-legged girl.

“She’s really athletic and long. I don’t know if that  made a difference, but the girls had practiced over and over. We do a lot of practice on PKs. Looks like it worked out.”

The change pay dividends immediately. Martin knocked away the first attempt she saw.

Then Hannan took the first shot for GRC.

“I actually started crying before PKs, because my nerves were everywhere, and I wanted to win so bad,” she said.

Hannan’s nerves didn’t show, as she calmly stepped forward to drill one past Hensley.

“We practiced it all season and especially the week leading up to the tournament, taking PKs so we all felt pretty confident in our abilities,” Hannan said.

Her shot set the tone, and the rest of the Cardinals followes suit, knocking in shots even as Bourbon’s shot found their marks, too.

“I was ready for it,” Manning said. “I really like PKs. I knew we had it because we had been practicing the weeks before.”

That first block proved to be the difference, and after Brooke Woosley’s shot hit the back of the net, the Cardinals met at midfield to celebrate.

“It feels amazing to get what we worked hard for all season,” Hannan said.

The Cardinals reclaim the 39th District crown. GRC had won each of the district tournaments since joining the 39th in 2012 — except for last season when the Cardinals lost to Bourbon, 1-0, in the title game.

“We’ll celebrate tonight then focus on the region — that’s the next step,” Abner said. “We think we’re good enough to compete and we’d like to see what we can do.”

The draw for the region tournament will be held this weekend and both the Cardinals and Colonels will be looking to have deep runs. They own the two best records in the 10th, with Bourbon at 15-4-1 on the year and GRC at 14-4-2.

“We’ve played in the region tornament before and it hasn’t gone our way,” Hannan said. “This season, I feel like we are much better prepared to go into it, especially as a higher seed.”