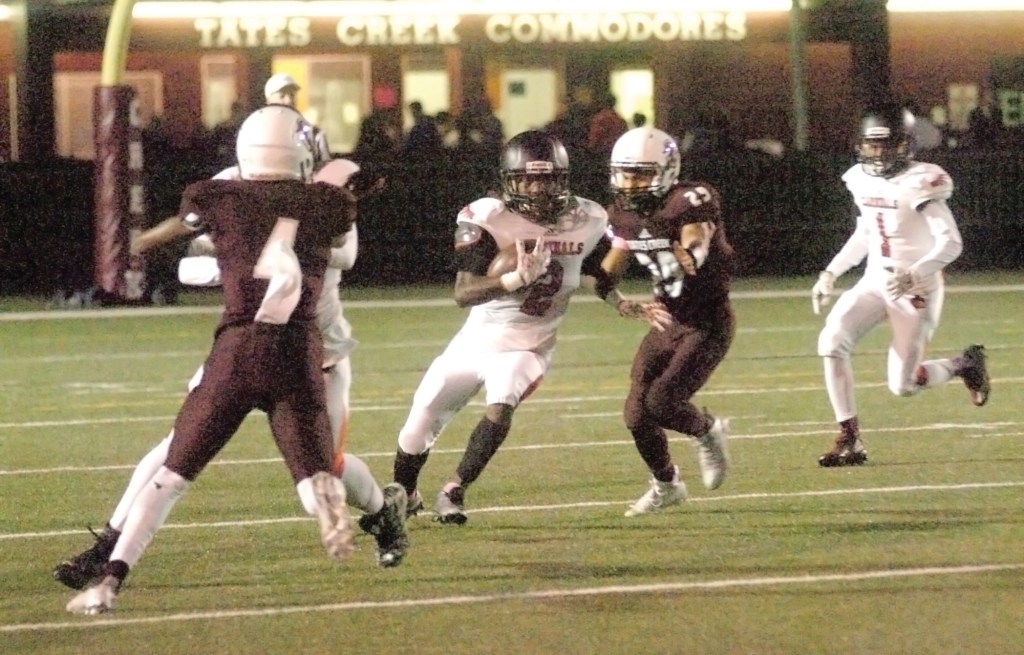 Casey Castle/casey.castle@winchestersun.com GRC’s Trevon Jones avoids a tackle while returning a kickoff during the first half against Tates Creek in Lexington Friday.

LEXINGTON — To say the George Rogers Clark High School football team’s schedule has been tough lately is to put it mildly.

The Cardinals (1-7) haven’t done themselves many favors over that stretch. GRC fell behind early Friday night and never got much momentum, falling to Tates Creek 36-0.

“We say it every week,” GRC coach Mike Riddle said. “Tates Creek is a very talented football team. We knew they had great skills positions kids. I was impressed the way their line played.

“You can’t make the miscues and field position mistakes we had and constantly put our defense in negative field position where the other offense only has to go  30, 40, 20 yards. You do that three times to start the game and it’s an uphill battle.”

The Commoodores (5-3) returned the opening kickoff 83 yards to start the scoring. Their next five drives started on their 50-yard-line or onGRC’s side of the field.

Tates Creek had 14 first downs to just four for the Cardinals, who never established a running attack or managed a consistent passing game against the Commodores.

The Cardinals finished with no net rushing yards on 20 carries. DeDe Knowles picked up 26 yards on 12 carries.

Most of GRC’s 74 passing yards came from backup Will Henry in the second half. He finished three-of-six passing for 61 yards, including a 28-yard pass to Isaiah Noland.

“I thought there were spots where we got under ourselves and cleared out the butterflies a little bit and the game slowed down for us,” Riddle said.

But for a team searching for a way to stretch those successes into sustained periods, it was not enough. The Commodores did most of their damage early, scoring 15 points in the first quarter and 21 in the second.

On the positive side, younger players continue to get reps in live-game action, building experience for a program which is still rebuilding.

“The younger guys we’re putting in there are taking  full advantage of playing time and taking advatnage of the game reps they’re getting to improve,” Riddle sadi. “We’re just a work in progress. We’re getting those young guys reps and seeing some encourageing things from them.”

The Cardinals travel again next week, heading south to face Madison Central in Richmond. The Indians are (6-2) and coming off a 49-31 loss to Lafayette Friday.

The Cardinals have one home game remaining. They take on Mercer County in two weeks in the regular season finale.