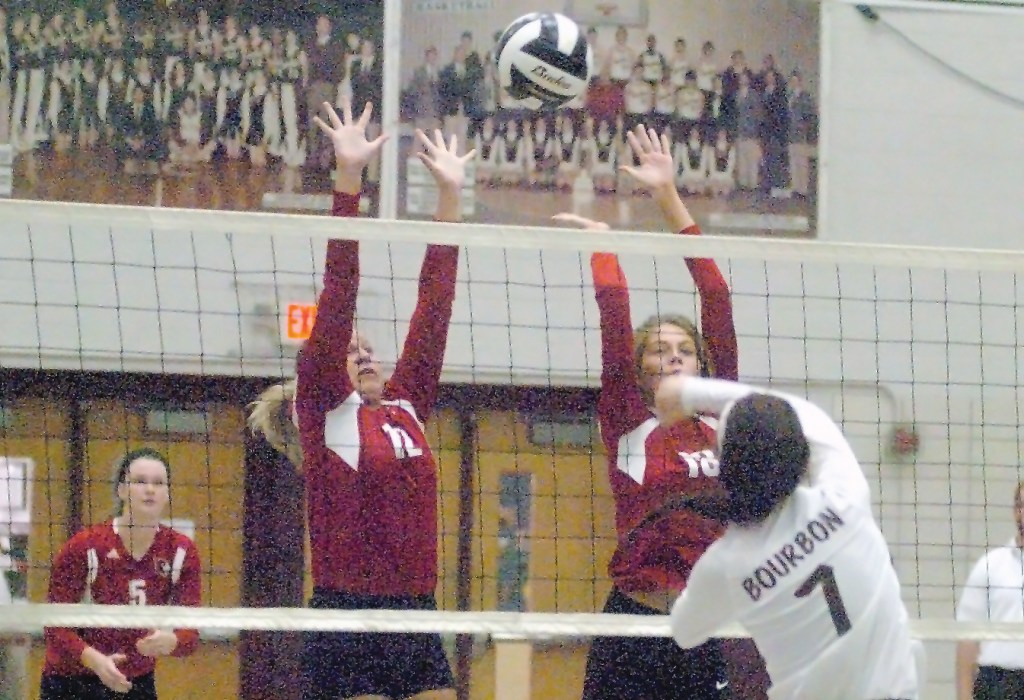 GRC’s Taylor Curtis, No. 12, and Madison Sexton, No. 18, attempt to block a Bourbon County attack

PARIS — Things just never really went the Cardinals’ way in their bid to repeat as the 40th District Tournament champs.

When the George Rogers Clark High School volleyball team had momentum, the Cardinals couldn’t keep it, allowing Bourbon County to survive in the first round, 3-0 (25-18, 28-26, 25-14).

The Colonels advance to take on Montgomery County.

The Cardinals had faced the Colonels on this floor a week ago, and GRC coach Tim Koshurba used that loss to scout and prepare for the rematch.

“We spent a lot of time in practice working on what their strengths were,” he said. “In my mind, we negated their strengths. We just didn’t get the 50-50 balls and the little plays. When we put ourselves in position to be successful we missed them. It was a lack of capitlization when we had those.”

Still, even when things started to tilt toward the Colonels, the Cardinals dug in and refused to yield. They mounted a comeback in the second set, and served for match-point twice.

“The girls worked hard,” Koshurba said. “I’m proud of what they did. Obviously, it’s not the result they wanted.”

The loss ends the season for the Cardinals (5-24), who are in the middle of rebuilding the program under first-year coach Koshurba.

“We all worked hard,” GRC senior Elena Guerra said. “At least we can say that. We gave a good effort and tried to do what we could.”

But the rebuilding process takes a hit as Guerra, a five-year varsity player and libero for the past two, graduates along with Micah Kindred and Elizabeth Hardiman.

“If you could pick the three most important positions on a team, they play those positions,” Koshurba said. “I have confidence, though, that we have some talent and depth coming up behind. They just need a year or two of seasoning to be as successful as this class was.”

“It’s a good group of girls,” Guerra said. “If they build on what they have next year, they should be all right.”