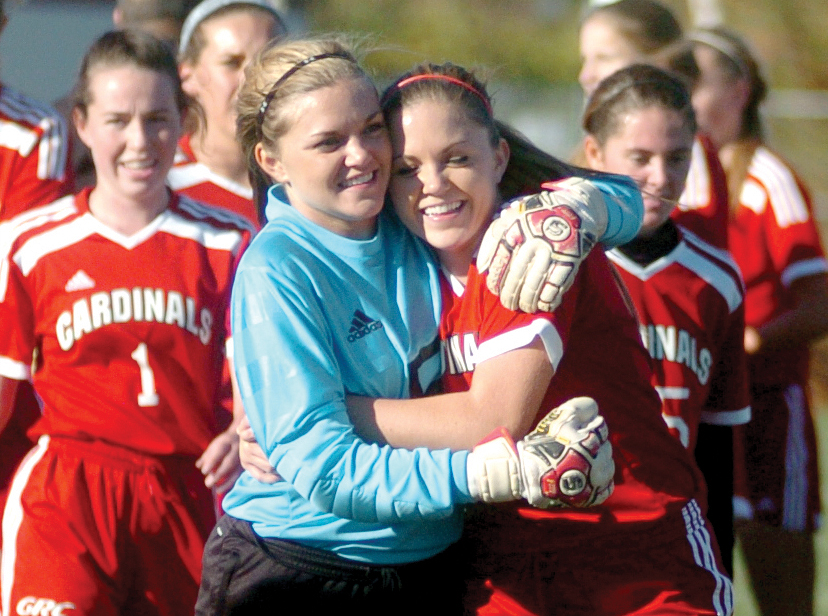 The George Rogers Clark High School girls soccer team passed a test with a 2-0 win over Harrison County, claiming the first region crown since the Cardinals joined the 10th in 2012.

“Going to state is a really big accomplishment,” GRC senior keeper Brennan Woosley said. “We’ve worked really hard all year. We’re successful this year because of our team chemsitry and we have really great character.”

The title game was a rematch of a regular season match, which GRC won 4-0 in Winchester. But Harrison County was improved from earlier in the year. And the Fillies (8-9-1) were playing on their home field, with nothing to lose.

“They play really well as a team,” GRC coach Matthew Abner said. “They were happy with where they are, and everything else was bonus.”

And that made them increasingly dangerous, as they evaded GRC’s numerous attacks throughout the first half to take a scoreless game into the halftime break.

Abner was less nervous as the game went on.

“I was nervous this morning when I woke up till I walked out on the field,” he said. “But as well as they were playing, I was happy with whatever result we got. I knew something would happen eventually if they kept playing as hard as they were playing.”

Senior Darby Manning was not so much nervous as she was impatient.

“It was a little frustrating,” she said. “We had a ton of chances in the first half. We just couldn’t manage to get one in.”

That changed 12 minutes into the second half. Haley Hannan set up a goal by Madeline Mann.

Neither team threatened much for the next 15 minutes, but as time grew short, the Fillies were forced to get aggressive, pushing up defenders to gain an edge on offense.

The Cardinals made them pay for that aggression when Shannon Ramey scored off a Delaney Manning assist in the final minute.

The insurance goal spelled the end for Harrison County and a trip to the state tournament for the Cardinals.

“That was so exciting,” Woosley, who finished with four saves, said. “We just worked so hard. To seal it with that goal, just meant so much.”

“It’s always a relief to put that second goal in with less than a minute left,” Abner said. “Then you know, whatever they do from that point on doesn’t hurt you.”

Madison Central pulls away from GRC, 49-6