Madison Central pulls away from GRC, 49-6 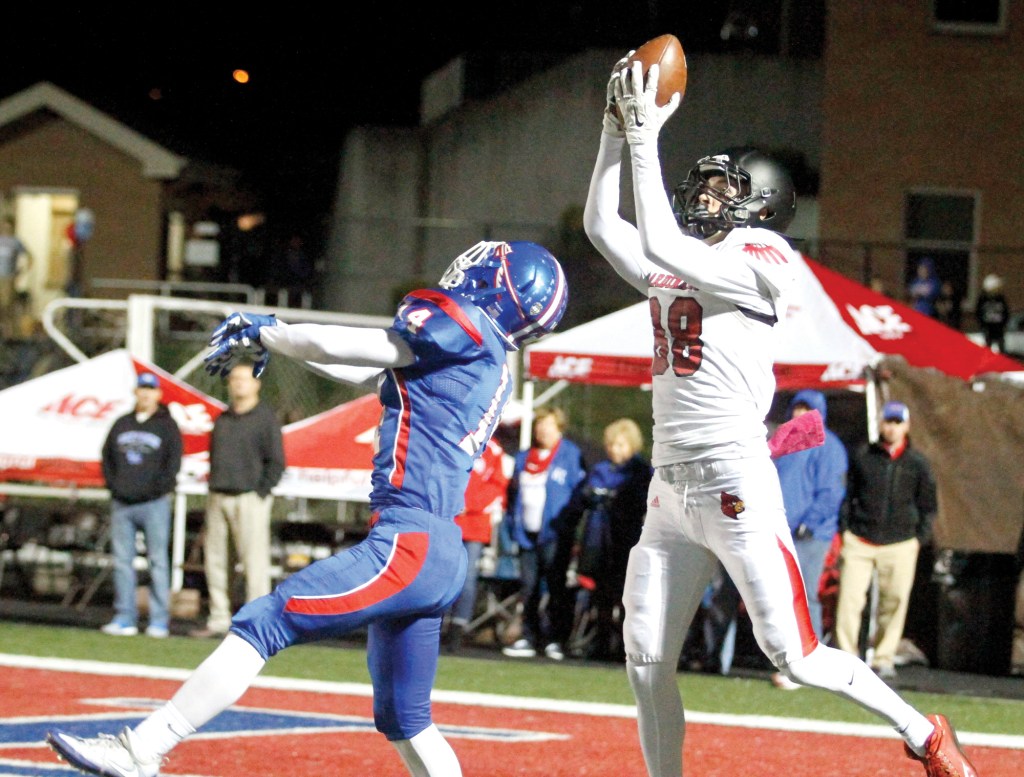 Nathan Hutchinson/The Richmond Register GRC’s Chandler Grey hauls in a touchdown pass over a Madison Central defender during the first half Friday night in Richmond.

The Cardinals (1-8) made the Indians (7-2) work through the first 15 minutes. Other than one big play that set up a 5-yard touchdown score midway through the first quarter, GRC held Central’s offense in check.

And the Cardinals missed a two-point conversion just after the start the second quarter that would have tied the game.

“When you come out and you’re disciplined and you run your routes and you handle your assignments and have a little bit of enthusiasm, it’s wondrous what you can do,” GRC coach Mike Riddle said. “I was proud of how our guys came out.”

But after the Indians scored three times in the final six minutes of the half, they never looked back.

“We knew this would be a tremendous challenge,” Riddle said. “They are an excellent team. They have a lot of talent and are well coached. I was proud that we came out early with a little bit of fire. We just weren’t able to sustain it.”

The Indians threw GRC a bit of curveball, going to the air more than they had in previous weeks. When the Cardinals were able to slow the Central run game, the Indians found a big play through the air.

“The explosive plays ended up getting us,” Riddle said. “That’s the challenge when you face a time that is multidimensional. On tape, we saw them grind people with explosive runs and do a great a job with guys up front getting a push. Then tonight they hit us through the air. That’s a credit to them. When you can have explosives in the run, and that gets taken away and you parlay it into explosives in the pass game. That makes you tough to defend.”

The Cardinals joined them in the air attack. Pearce Nesbit was 11-of-24 passing. Joseph Happy caught four passes for 20 yards. Chandler Gray caught three passes for 51 yards, including a 36 yard touchdown strike in the second quarter.

Will Henry caught a pass for 32 yards, and Jehdon Jenkins caught one for 14.

The Cardinals will return home next week to celebrate senior night and play the final regular season game of the season. They take on Mercer County Friday.