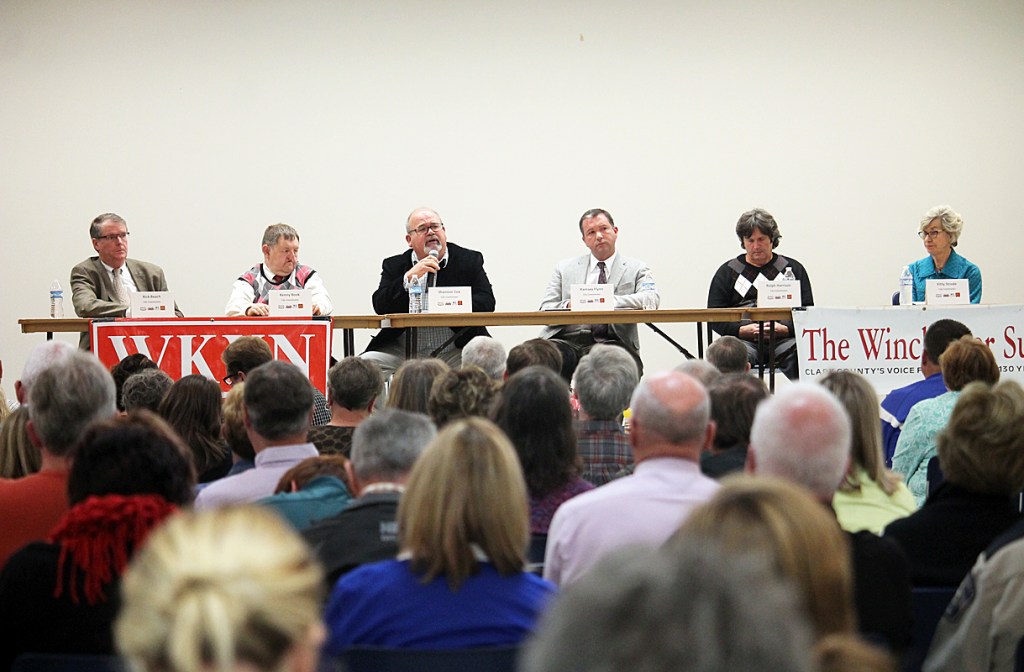 Six candidates for the Winchester Board of Commissioners tackled topics ranging from the drug problem to downtown revitalization and keeping tax rates low Thursday night in a candidate forum.

Clark County’s needle exchange was one of the main discussion topics. The program, which is operated by the Clark County Health Department, was approved earlier this year and is due to be reviewed next year.

Cox, an 18-year commission member, said he would continue to oppose the program when it comes up again.

“You have to put up every obstacle you can to curb (drug abuse),” he said. “Maybe I had to say no to tolerating it.”

Flynn, a retired city firefighter and EMT, called it a “no brainer” for public safety, as parks employees routinely find used needles in public areas.

Harrison said it’s a good concept, but may need some tweaking.

“I think the needle deal sounds like partially it could work,” he said. “If you have clean needles, you know who needs help.”

Strode and Beach said they struggled over their votes in favor of the program, but see it as a public safety measure.

“We talked about it and prayed about it,” Strode said. “I am for it because I talked to the police department, the sheriff’s  and (Clark County Health Director) Scott Lockard. It’s a health issue.”

The candidates also spoke at length about wanting to improve living conditions in Winchester, whether through better jobs, improving housing standards or removing dilapidated structures.

“You wouldn’t believe the living conditions some families are living in,” Flynn said of some rental properties he saw on emergency calls. “We have a problem. … It’s something that needs to be fixed. We’re facing a big problem  if we don’t get a hold of it now.”

“If these people had higher-paying jobs and more of them, we could beautify this town all we want,” Harrison said. “That would help the community in all kinds of ways.”

Cox said adequate, affordable housing is a huge need and one which Habitat for Humanity, of which he is a board member, is addressing.

“We plan to build 10 homes in the next three years,” he said.

“The biggest problem is dilapidated housing,” Book said. “There’s rodents living in there and no one living in the houses.”

“It’s a danger to our community,” Strode said. “We are trying to take down five (houses) per year.”

Beach said he’d like to see a better trained workforce to fill existing jobs and attract more industry to town.

Later in the event, all six said they would be open to the idea of merging city and county governments, but only after it was studied in great detail.

Kemper, Barr clash on all levels