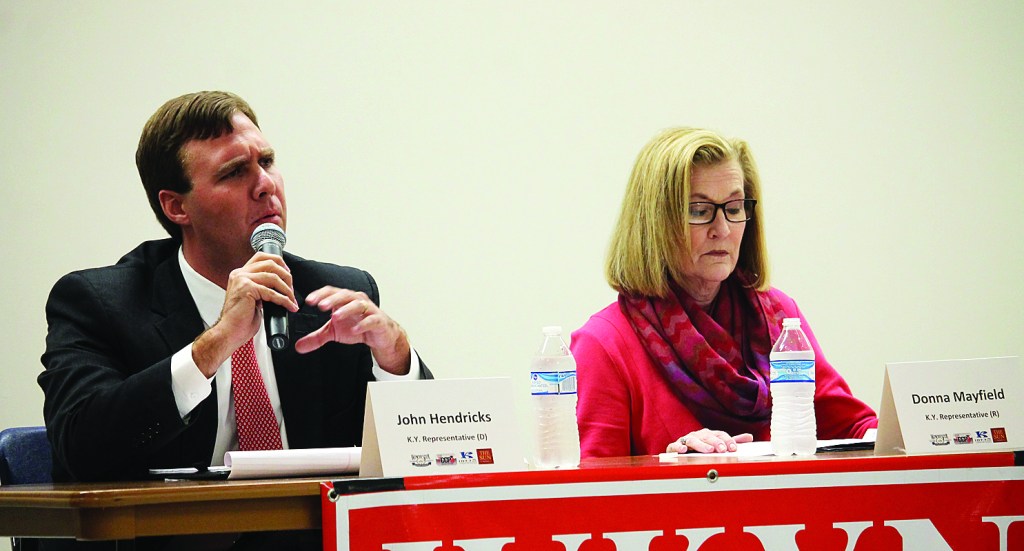 State Rep. Donna Mayfield, a Republican from Clark County, and her opponent John Hendricks, a local attorney and Clark County native, each said much needs to be done to improve the business climate in Kentucky.

“We have to simplify the process,” he said. “We have a great resource in the one-stop business portal that exists online through the secretary of state’s website, but we need to simplify that and we need to expand on it. There’s no reason you should have to deal with state revenue, the secretary of state’s office and five or six other offices when you’re trying to establish a small business.”

“We have to make Kentucky and Clark County a more positive area to get businesses trying to relocate to different areas,” she said. “We hear it up in Frankfort a lot that companies tend to shy away from Kentucky because they say we don’t have a friendly business community here and they mention right to work legislation and they basically say that they get better deals in other states.”

“I think that we need to work really hard at making Kentucky more attractive. We need to give tax incentive for companies to come.”

Hendricks said he thinks the Commonwealth needs to do more to attract small businesses.

“We do a lot of things in this state to attract large businesses, but we need to do something to help our small businesses in this community as they grow and expand,” he said. “We need to provide incentives for them as well when they add employees, when they grow, because those businesses matter too.”

Both candidates said they agree with the Kentucky Supreme Court’s decision regarding Gov. Matt Bevin’s replacement of the University of Louisville Board of Trustees.

Mayfield said she thinks Bevin is doing great things in Frankfort, but upholds the court’s decision.

“I have to stand with the courts when they say it’s illegal,” she said. “I’m a great believer in the court system. I do believe in the law and I believe in upholding it, and they did rule what he did with U of L is illegal.”

“I do support his efforts, but I will stick with the courts as their ruling stands.”

Hendricks said it’s important to have balance and accountability in Frankfort.

Mayfield was elected to the seat in 2010 and is running for her fourth term.

“The court rulings have been clear,” he said. “The Kentucky Supreme Court stated the actions of the governor violate statutes in the state constitution, we can’t let our university boards become political footballs any time there’s a new governor.”

As for the state’s multibillion-dollar pension shortfall, both candidates said the belts of government spending need to be tightened.

Mayfield said she sees rampant abuse of public funds in Frankfort all the time.

“I believe that our state pension system is in a terrible crisis,” she said. “We have $38 billion of unfunded liability.”

She said she was proud to work with other legislatures in the last session to invest $125 million into a pension trust fund to address the problem.