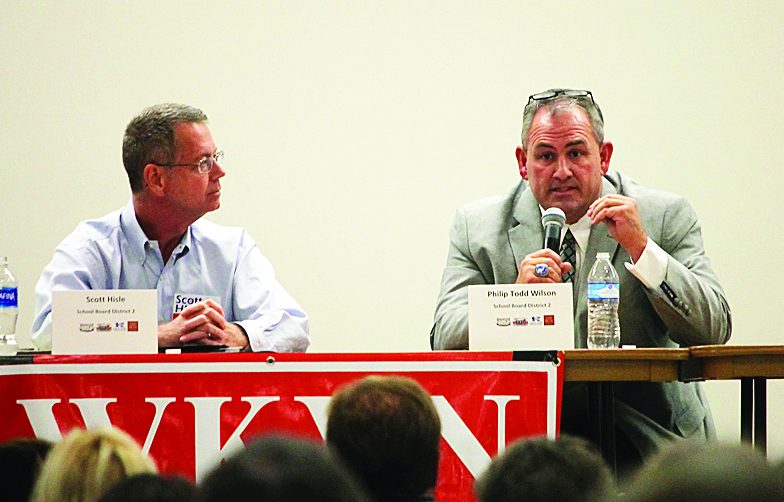 Wilson, the incumbent in the race, has served less than a year on the board after being appointed in February. He said his top priority is giving students in the district, including his own two children, the best quality education possible.

Wilson’s challenger, Hisle, works as a financial officer for a local manufacturer and said he became interested in running for the board after seeing his school taxes increase by 50 percent in nine years.

The two candidates disagreed on the issues of safety and efficiency in the school district when a question was posed about moving Phoenix Academy to one of the wings of Campbell Jr. High.

Hisle said while the safety of all students is a concern, the district must also

“I think if we could utilize some space that’s already been built out or is close to being built out to take over for other space that perhaps should be changed then perhaps that’s something we ought to look at,” Hisle said. “I think, probably, because of the separation of the wings we should be able to do that in a safe manner. But it’s something that will certainly take a lot more investigation.”

However, Wilson said he believed the move would be a bad idea.

“I would probably be opposed to maybe putting the kids of the Phoenix Academy up there because there are 800 kids that are doing the right things, and the object of the Phoenix Academy is to get those kids out of that environment and into a more restrictive environment and get them into a smaller situation so they can be successful,” he said. “I think we’ve got to be careful putting those kids back in the mainstream with the other kids because you’re asking for trouble to start again, so I would be very opposed to that.”

Wilson said he would consider renovations to the Phoenix Academy or moving it to a different location if one became available.

On the subject of taxes, Wilson said that increasing rates is something that nobody likes to do, but it can be vital to the success of the district. He said that without increased taxes, recurring costs such as raises for teachers will have to be taken from elsewhere in the budget, which could hurt the district’s reserve fund.

Both candidates agreed, however, that athletics and extra curricular activities are important tools to keep students involved in the community and should be invested in.