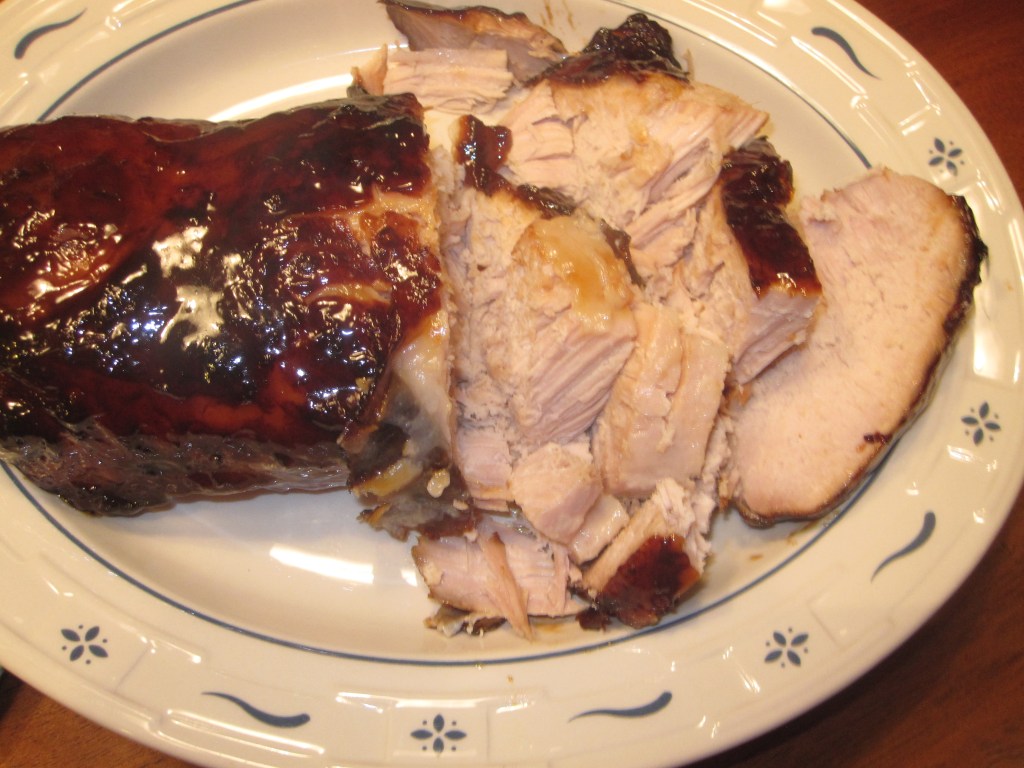 I was in the mood for pork and found today’s recipe for “Old South Coca-Cola Pork Loin” on the internet at twirlandtaste.com.

I’ve not had much luck cooking a pork loin in the crock pot and having it come out real tender, so I thought slow cooking it in the oven might be the answer.

Today’s recipe does just that.

The recipe calls for:

Combine all the ingredients except for the meat, to form a marinade.

Sit the pork roast in a plastic bag with a zip-type seal, pour in the marinade and seal the bag.

Sit the plastic bag in a serving bowl large enough to steady the roast and keep the marinade ingredients from spreading away from the roast.

Let stand for 24 hours or overnight in the refrigerator, patting and turning the bag every few hours to ensure the meat marinates evenly.

This helps the roast absorb the marinating liquids and creates a tender, juicy and flavorful roast.

Remove roast from marinade and discard the marinade. Place roast, fat side up, on the rack in a roasting pan. Insert a roast meat thermometer so the bulb is centered in the thickest part.

Do not add water, and do not cover.

Roast in a slow 325 degree preheated oven until the thermometer registers to 175 degrees.

During the last half hour of cooking time, brush on the glaze.

If you prefer, you can just as easily cook on the grill or in the smoker.

Remove from the oven and out of the pan onto a platter; cover with a foil tent to seal steam and rest the meat 15 minutes before slicing and this results in a much juicer roast.

Alternatively, you can slow-roast.

The meat will be even more tender.

Use your meat thermometer or whatever means you like to achieve desired doneness.

For the  Coca-Cola Sauce, you will need:

Mix together all ingredients in a sauce pan; simmer and stir to thicken. Brush or spoon glaze on meat frequently during cooking. You can also serve any remaining sauce with the sliced pork if you like.

When I was young, my dad was a Pepsi distributor and I was taught that Coke was a dirty word. I literally thought it was a bad word.

I just knew if I said Coke or took a taste of it, I would be in all kinds of trouble. As I got older and dad moved on to another career, I did taste Coke and it became my soda of choice.

However, I rarely drink soft drinks anymore, just when I have a bad headache.

When I saw the title for this recipe, the first thing that came to mind was The Old South Inn and my dad.

The Old South Inn was a very nice restaurant in town (where Dr. Bishop’s Office is located).

I never ate there, but my mom remembers eating there a few times. For some reason, seeing the words Coca-Cola in the recipe reminded me of my dad and brought back memories of me riding along in his Pepsi truck delivering soft drinks to Thornberry’s Super Value, the old Kroger downtown, the Jackson House (a hamburger place that served 14 cent burgers, similar to White Castles, which was located on the corner of Cleveland Avenue and Maple Street where part of The Winchester Sun is now located), and two country stores on the Old Boonesboro Road (one is now Beech Springs Market and the other is JK’s at Forest Grove).

Enough reminiscing, let’s move on to the recipe.

Because of these memories, I figured this recipe had to be good.

This recipe was extremely easy to put together.

My pork loin was only 3-1/2 pounds, but I used the marinade ingredient amounts listed in the recipe, knowing it wouldn’t make a difference and I sure didn’t want to try and figure out how much I would need for a smaller amount of meat.

Even though the recipe doesn’t call for it, I poked holes in the pork loin thinking that might help the marinade seep into the meat then put the pork in a gallon bag.

I gathered all of the marinade ingredients and just dumped everything into a bowl, mixed them together and poured the marinade over the pork in the bag. I zipped up the bag and put it in an oblong bowl in the refrigerator to come together.

I wanted to have this dish for supper, so I put everything together the night before.

Knowing I like my pork well done — no pink in the middle for me — I decided I would go home at lunchtime and put it in the oven.

The recipe says to cook for about 30 minutes per pound at 325 degrees, but I opted to cook mine at 250 degrees for seven hours, hoping it would be done and deliciously tender by the time we were going to eat supper.

So when lunchtime rolled around, I jumped in the car and headed home (it takes 15 minutes or so for me to get to my house from work, depending on if I get behind a slow poke on our country roads).

I’d gotten my pan ready that morning and had programmed my oven to come on and be preheated when I got there.

I pulled the pork out of the refrigerator and slipped it out of the bag. The recipe calls for cooking on a rack in a roasting dish. I improvised by placing the pork on a Pam sprayed cooling rack sitting on a Reynolds wrap-lined cookie sheet.

I hoped the cooking spray and the Reynolds wrap would make for easier clean-up.

I poured the marinade out and then put the pork in the oven, locked the house and headed back to work.

I’ll let you know that I was a little nervous having my oven on while not at home, but I hoped having the oven at such a low temperature, everything would be OK.

When I arrived home and opened the door, the aroma was so good it made my mouth water and I could hardly wait for supper.

I’d been given some fresh sweet banana peppers and green bell peppers the day before and decided to prepare them along with carrots, potatoes, onions and shiitake mushrooms (just cube or slice, add a little olive oil, salt, pepper, and Mrs. Dash and bake at 400 degrees for about an hour or until done).

About the time I put the vegetables in the oven, I remembered that I had not prepared the Coca-Cola Sauce for the pork loin so I hurried up and threw all the ingredients in a small pan and heated the mixture up until it thickened. This took longer than I thought it would. Then I just slathered it on the pork loin as instructed.

I basted the pork three times before it came out of the oven.

When everything was ready, I sliced the pork loin. It appeared to be very tender; and then we sat down to eat. The sauce tasted almost like candy on top of the pork so Brad and I opted not to spoon any on top of our individual helpings of meat.

Brad and I both liked this dish and the roasted vegetables were a nice addition.

The pork wasn’t as tender as I’d hoped, so next time I won’t cook it as long but I will be fixing this again.

I nailed this recipe and it’s headed to my self-made cookbook.