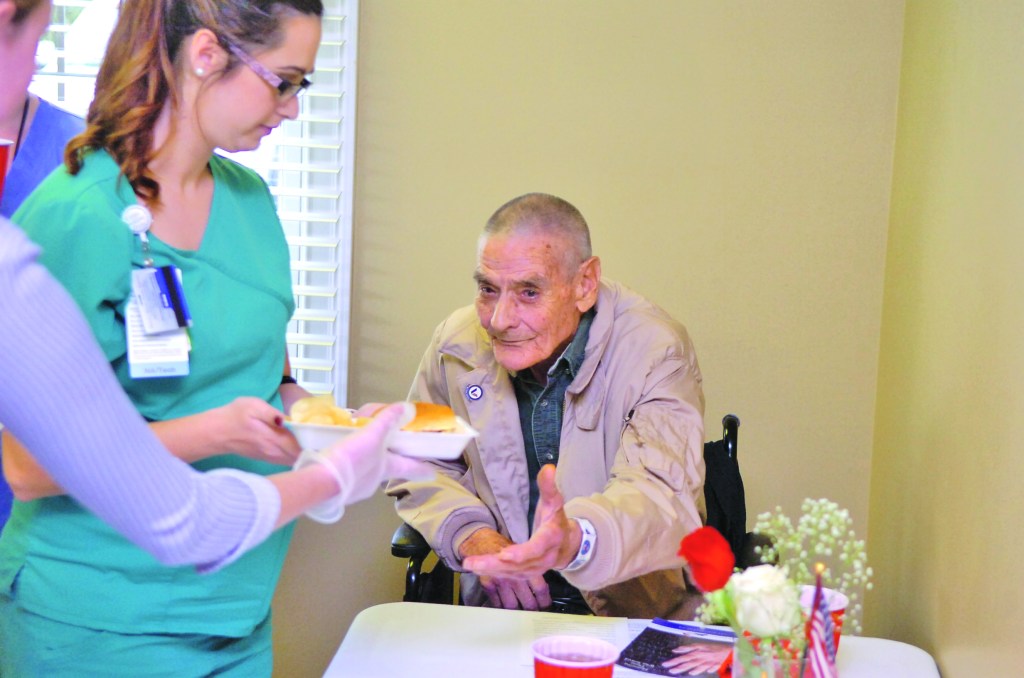 The annual veterans lunch at Hospice East drew a record number of visitors Thursday, with about 60 veterans attending to enjoy free lunch and fellowship.

Hospice East Executive Director Debbie Jones said attendance has grown each year since it began in 2013. Part of the secret to the event’s success, she added, is the timing of it.

“We wanted to something for our veterans, but we chose to do it the week before Veterans Day because there are so many things going on that week,” Jones said.

For this year’s event, Hospice East had help from two sponsoring organizations, CareSource, a health care provider based in Dayton, Ohio, and Columbia Gas of Kentucky, whose volunteers worked in the kitchen Thursday.

The event began with a prayer and recognition of an empty table set in memory of all service men and women who are prisoners of war or missing in action.

Lunch followed, and the event concluded with a round of singing of military hymns and the National Anthem, led by hospice volunteer Mary Ann Blackburn.

Jones said the event has become a popular one among local veteran communities, and she sees a lot of the same faces year after year.

“I know a man who goes to every (veterans) program, and he loves this one the best,” she said.

Jones said since hosting the event, personal bonds have begun to form between the hospice staff and the veterans in the community.

About a dozen veterans present joined a waiting list for the Honor Flight  program, which operates in more than 40 states across the U.S. Honor Flight partners with sponsors to send veterans on an all-expenses-paid day flight to Washington, D.C. in order to visit their respective memorials.