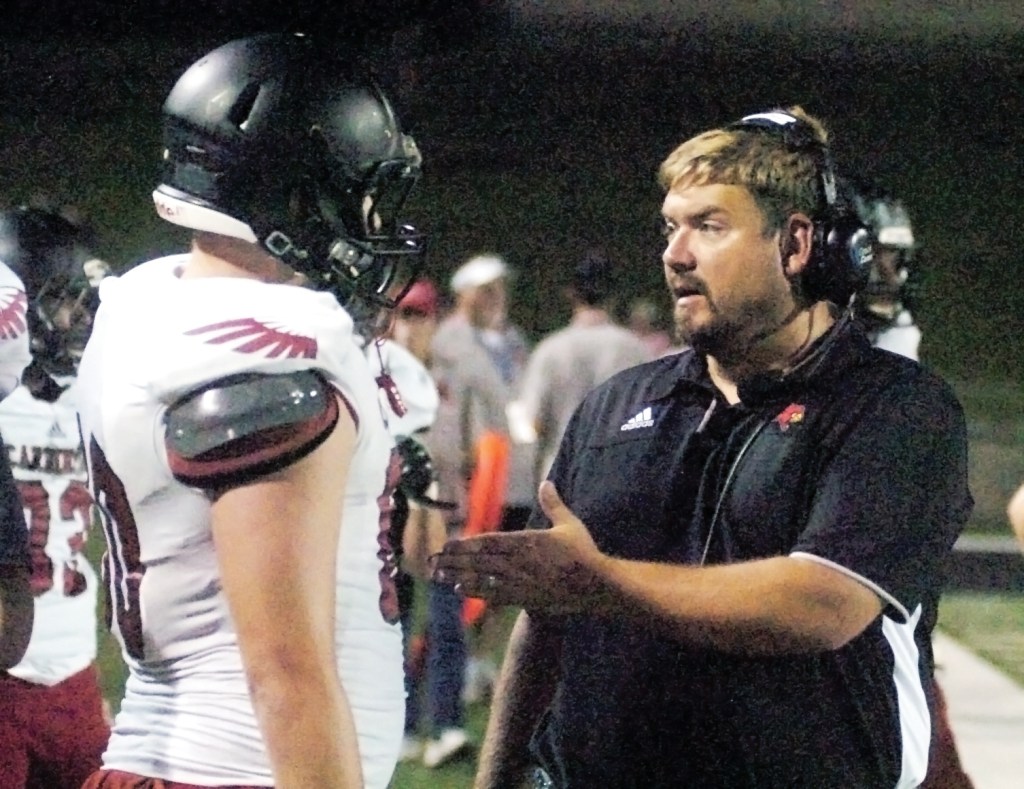 GRC football coach Mike Riddle goes over a play with Hunter Dunn on the sideline at Toyota Stadium in Georgetown during a game against Scott County earlier this season. Casey Castle/casey.castle@winchestersun.com

After three seasons at the helm of the George Rogers Clark High School football team, Mike Riddle is stepping down.

The coach resigned his post after the team’s first-round playoff loss at Simon Kenton Friday night. He told the players in the clubhouse after returning to Winchester.

The Cardinals won just three games over two seasons under previous coach Steven Collins when Riddle took over in 2014.

“I want to thank coach Riddle for his commitment to the GRC football program for the last three years,” GRC Athletics Director Jamie Keene said. “We had a discussion last week, and I understand and support this decision to resign. I wish coach Riddle the best in whatever he decides to pursue.”

Riddle said the decision to leave the post was not because of lack of admistrative support. He thanked GRC principal David Bolen and Keene for their assistance while he attempted to rebuild the program.

“In today’s education climate, sometimes leadership at the adminstrative leve is a commodity and I really appreciate their support and everything they did as we worked to build this thing,” Riddle said. “I appreciate both those guys.”

Still, there were elements that made things difficult as the Cardinals moved to get back on the winning path.

“There were some outside entities behind the scenes making it impossible to do the job the way it needs to done,” he said. “I took that into consideration once it became a distraction to the players and was affecting them.

“From Day 1 at this place or any place I’ve been, every decision is about the players and how to help them be successful.”

The decision didn’t come easy, as the Cardinals just finished arguably the toughest schedule in the state — seven of GRC’s 10 regular season opponents hosted playoff games — with strong sophomore and freshman classes on the horizon. The Campbell Jr. High football programs have also had success.

With talented younger players and a lighter schedule ahead, success appears to be on the horizon.

“I told the kids I have faith in them,” Riddle said. “I know they can win, and they can be successfuly when you look at the freshman and sophomore groups and the schedule I built for the next two years, it’s going to be very favorable for GRC.”

And the struggles of the past two season would have a been a bump in the road for Riddle, who was committed to the program.

“I envisioned myself being there for a long time,” he said. “My goal and everything I do and every decision I make is geared toward making the players successful. It was just becoming counterproductive.”

Riddle said he will continue to coach, taking some time to spend with his family before carefully considering  any opportunities.

“I’m in no hurry. The phone usually rings several times this time of year.  I will take some time and find something right.”

Keene said the process to replace Riddle will begin immediately when the school posts the position and assembles a hiring committee.