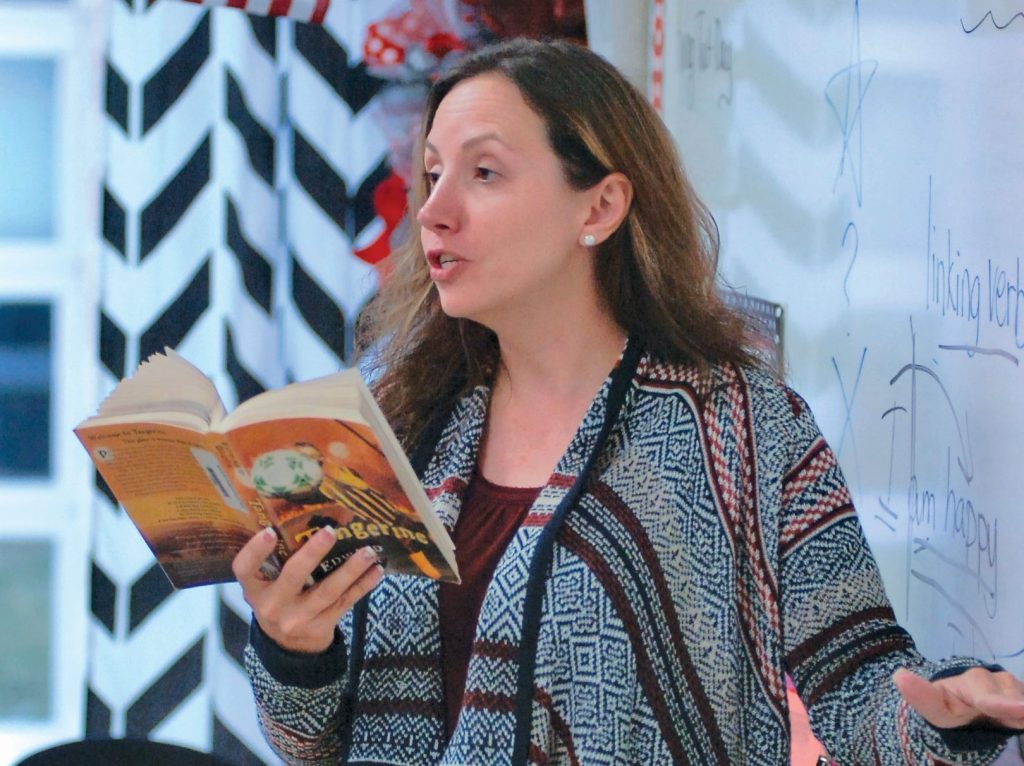 Candida Murphy, a language arts teacher at Campbell Jr. High School, walks back and forth across her classroom Friday afternoon reading aloud from a young adult novel, “Tangerine” by Edward Blook.

The students in one of her six classes read along silently sitting at their desks, occasionally glancing up at the clock on the wall in anticipation of the approaching weekend, but fully engaged when Murphy asks a question to start a discussion about making judgments about people based on the way they talk, look or act.

Despite the depth of the subject matter, Murphy keeps the conversation light and fun, listening to the students and responding to their ideas.

Murphy says she strives to be “the weird teacher,” going to whatever lengths she can to grab students attention and show them that she cares about the quality of their education.

“That’s the person you’re going to listen to and wonder what they’re going to do next,” she said.

The dedication and creativity Murphy brings to her job was rewarded recently when she was named one of Kentucky’s teacher achievement award winners for 2016.

While Murphy said it wasn’t the first award she had won for teaching, she said it may be the most significant.

“It was such a great honor,” Murphy said of the award. “Because there are days when I’m here very, very late, or I’m going in very, very early. My daughters are just used to being at school. The fact that I dedicate myself so much and someone took he time to notice … it meant a lot to me.”

Murphy said the impact she has on her students lives isn’t limited to their time in class either, as she tries to teach them to continue learning outside of school as well.

“I’m trying to instill in my kids a love of reading, which is a lot of the times why I read aloud,” she said. “A lot of the time you can assign it, but you don’t know if they actually read it. If you read aloud and you actively engage them and do projects with it then hopefully they’ll find a book that they love. Every child is a reader, they just need to find their book.”

Murphy’s classroom is filled with posters, worksheets and drawings on the whiteboard relating to the book the students are currently reading.

She said that some of the material is put together when she notices interest in the readings start to wane.

“That’s usually when I will pause and we’ll think about what has happened,” Murphy said. “We’ll make predictions or create a new character, and when you do stuff like that their interest comes back because they’re invested in the story again.”

Murphy has been teaching for 16 years, and she has taught in Kentucky and Georgia.