What’s next for GRC football? 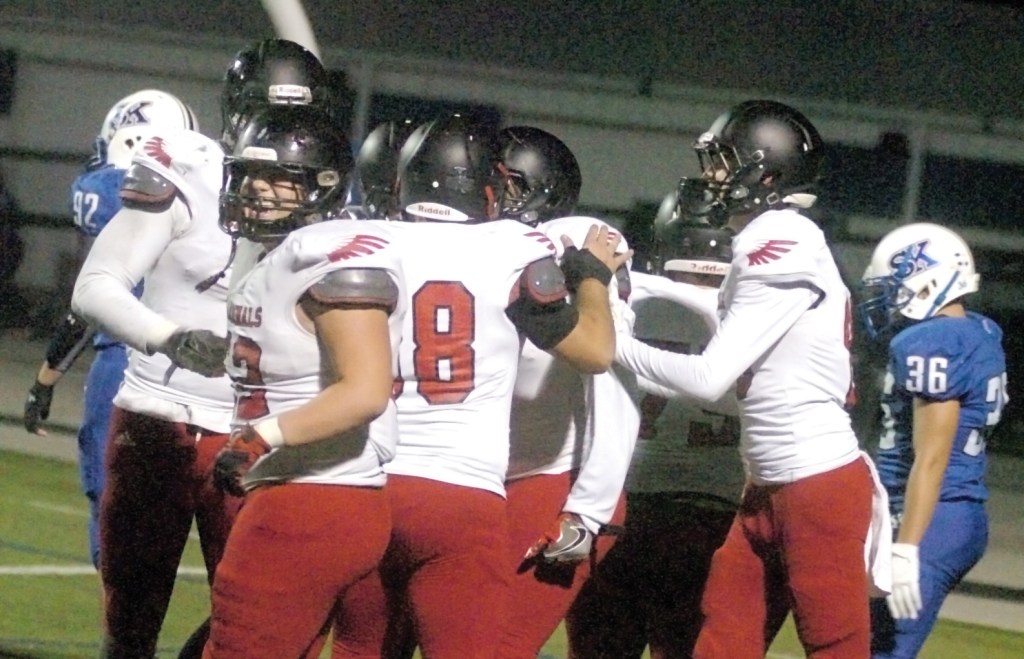 Casey Castle/casey.castle@winchestersun.com GRC’s Seth Boyken, left, smiles at the sideline while his teammates celebrate a touchdown behind him late in the fourth quarter at Simon Kenton Friday night.

No one would have blamed the members of the George Rogers Clark High School football team if they had moped their way through Friday night’s playoff game.

But the Cardinals weren’t having any of that. Even after a string of turnovers helped Simon Kenton build an insurmountable lead and the injuries started to pile up for GRC, spirits were light on the Cardinals’ sideline.

“The ones who are here are having fun. They understand it’s a process,” GRC coach Mike Riddle said after the game. “We’ve got some building blocks to continue to work on. (Their attitude) is all you could ask for.”

It’s a rebuilding process that will continue without Riddle. The coach stepped down after the game — a decision made earlier in the week — leaving the Cardinals to find their third coach in six years.

From the outside looking in, things look much worse than they are. The Cardinals have just one win over the past two seasons, sure, but they haven’t had the easiest path over that stretch.

Their opponents in 2016 have averaged seven wins so far, and six of the Cardinals’ 10 regular-season opponents won playoff games last week.

Injuries also plagued the Cardinals throughout the year, hobbling a defense that looked promising through the first four games. Riddle was forced to dip even further into a short bench.

Luckily for the Cardinals, there’s a lot of talent in that sophomore class that was pressed into early service. And this year’s freshman team had the kind of successful season that would have any varsity coach excited. That, coupled with the Campbell Jr. High eighth-grade team’s conference championship this year, gives a lot of GRC fans hope for a bright future.

And it certainly could be.

GRC Athletics Director Jamie Keene said the process to create a hiring committee and posting the job would begin soon, but there’s no reason to hurry.

Next year’s easier season slate, a surge in football talent waiting in the wings and a brand new stadium somewhere on the horizon, all make GRC more attractive as a destination than usual.

The progam isn’t nearly what it appears at first glance — and to blame what shortcomings it has on Riddle is to take a short-sighted view — but it will still be a challenge for the next coach.

Keeping those younger players interested in a program that hasn’t had much success in the win column while making sure they develop like Clark fans hope and expect will likely be a high priority.

The hiring committee will be tasked with finding someone capable of that while also handling the expectations that come along with them.

But while looking at the potential of the future, let’s not lose sight of the players who understood they were part of a rebuilding process and refused to quit. Who worked hard and took the field 11 times in 2016 with pride and a desire to win, and dignity even when they didn’t.