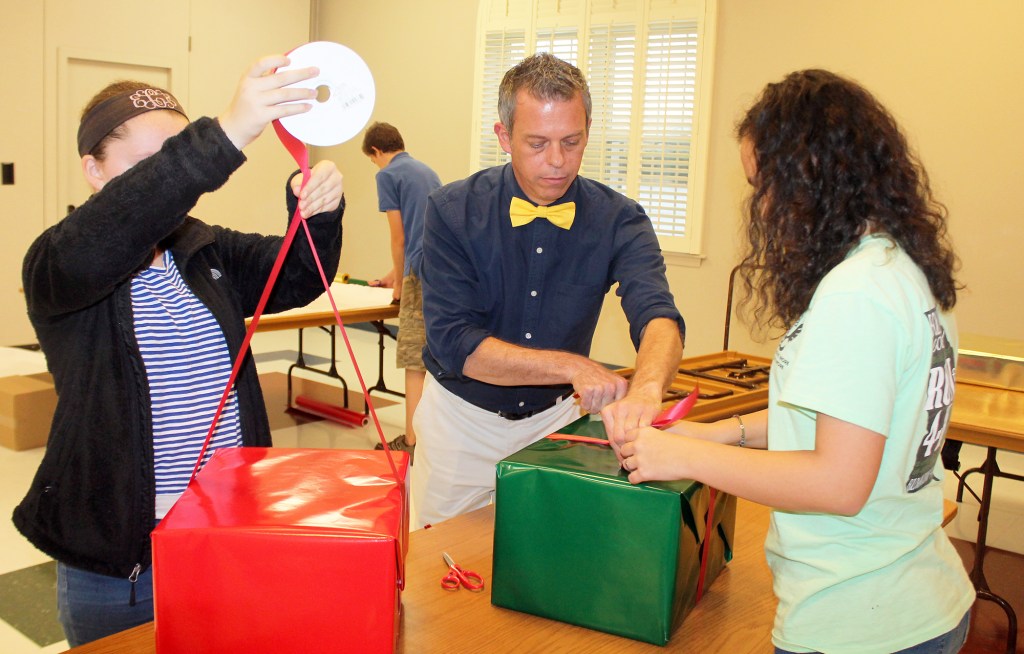 Photo by Whitney Leggett Mason Rhodus, center, shows Carlee Franklin, 14, right, how to tie a bow on a gift to be used for decorations in downtown Winchester, as 12-year-old Emmie Comer, left, measures her own ribbon.

Each year lights are strung from the Clark County Courthouse bell tower to downtown shops on the opposite side of Main Street, illuminating downtown Winchester as the community prepares for the holidays.

This year, however, Main Street will have a different look for the holiday season.

Main Street Winchester Executive Director Rachel Alexander said the lights will not be strung this year because work is being done on the bell tower.

The Clark County Fiscal Court has been discussing what to do with the bell tower, which is deteriorating and leaking water into the courthouse. Earlier this summer, the Court approved a contract with Tate Hill Jacobs Architects and Poage Engineers to develop a plan to preserve or rebuild the bell tower.

“Because they’re working on the courthouse clock tower, we’re not able to do the traditional Christmas lights,” Alexander said.

The downtown decorating committee — which includes Kitty Strode, Deatra Newel, Mason Rhodus and Alexander — met the discuss alternative ways to bring some holiday cheer in lieu of the lights.

“We wanted to still make downtown festive for the season,” Alexander said.

Bargains on Broadway donated empty cardboard boxes and the 4-H Teen Leadership club wrapped the gifts in red, green and gold for the season.

Alexander said the Teen Leadership Club wrapped the gifts to make money to fund at rip to the presidential inauguration in January.

“The lamp post are already wrapped by public works and they have new wreaths and bows,” Alexander said. “It’s really been a team effort to make downtown look beautiful. It’s going to have a lot of community spirit and Christmas spirit.”