More owners of the Haggard House 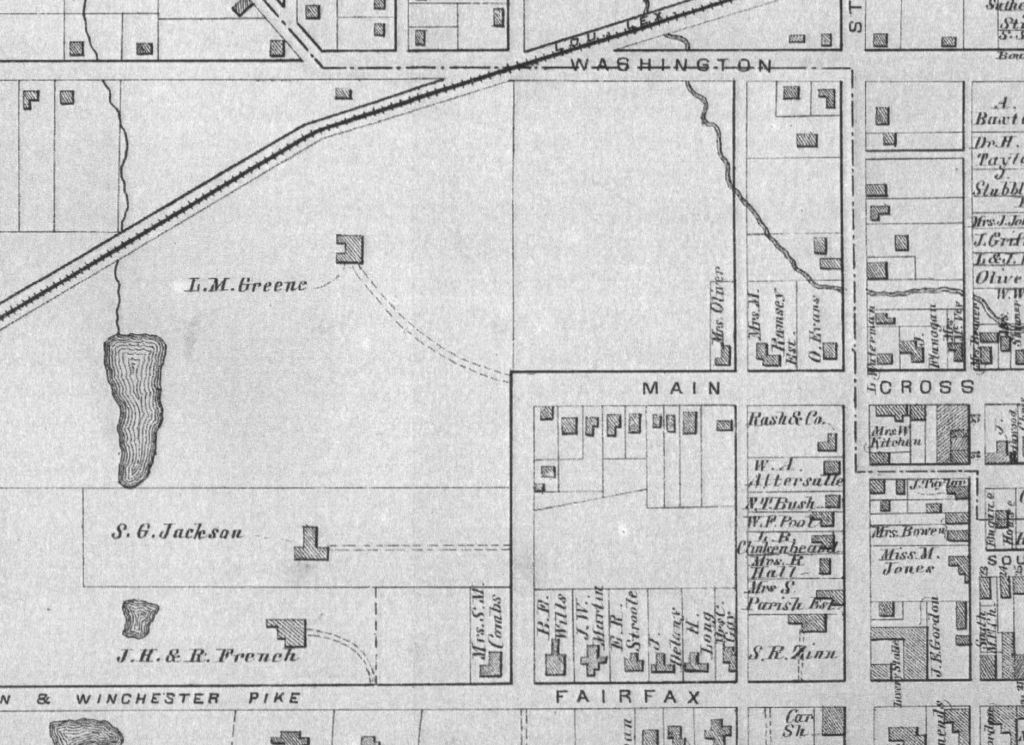 The L. M. Green place as shown on the 1877 Beers map of Winchester.

This column continues the series of biographical sketches of those who owned the house on West Broadway where Rodney Haggard died. We begin with Charles Eginton, who purchased the house from Richard Hawes.

Charles Eginton (1814-1890) was born in Philadelphia, came to Kentucky in 1833 and taught school at Matthew Hume’s in Clark County. Eginton studied law under Judge James Simpson and was admitted to the bar in 1836.  His biography states, “He soon took a front rank among such legal giants as Judge Simpson, Samuel Hanson, Gen. [John B.] Huston and others who made the Winchester bar of that time the strongest in the State.”

Eginton married Sarah Louise Taylor, a daughter of Reuben T. Taylor. He was an active Mason and, in a rare honor, was twice elected Grand Master of the Grand Lodge of Kentucky. Eginton was also an officer in the Order of the Sons of Temperance. About 1870 he moved to Covington and became a prominent attorney and judge in Kenton County. He died in 1890 and is buried in Linden Grove Cemetery in Covington.

Eginton purchased the West Broadway house from Richard Hawes in 1843 and sold it to William Buckner in 1850. The deed states that the property “had been in the possession of Hawes as a family residence and since the conveyance has been so used by Eginton.”

William Buckner (1801-1876) was born in Caroline County, Virginia, the son of Henry Buckner and Elizabeth Catlett. William, who never married, was a wealthy Clark County farmer. He is buried beside his parents in Winchester Cemetery. Buckner kept the West Broadway house for seven years then sold to Elizabeth Hedges in 1857.

Elizabeth Hedges (circa 1798-1868) was a daughter of Ennis Sutherland of Clark County. She married a cousin, Thomas Sutherland, in 1819. After his death, she married John Hedges in 1850. No further record is found for John, so he may have died soon after. On the 1861 map of Winchester, the house, owned by “Mrs. Hedges,” is accessed from an unnamed street off Lexington Road. Elizabeth sold the house to William H. Spencer in 1867.  She died soon after and, although she had purchased a lot in Winchester Cemetery, her grave has not been located.

William H. Spencer (1807-1901) was a wealthy Clark County farmer residing in the Colby Road area. He married Rebecca Brooking in 1846. Sometime in the 1870s they moved to Fort Scott, Kansas. They died and are buried there in Evergreen Cemetery. In 1869, Spencer sold the West Broadway house to Thomas H. Moore for $5,000, it “being the house now occupied by the said Moore.”

Thomas H. Moore (1826-1879) was the eldest son of Thomas Ransdell Moore, who had owned this same house some thirty years before. Thomas H., the son, married Maria Bright, a daughter of Tennessee congressman, John Bright. Thomas served in the Union army in the Civil War, first as a provost marshal and later promoted to the rank of major. He was still residing in the West Broadway house in 1875, when he sold the place to L. M. Green in exchange for a farm on the Kentucky River. The farm, known as the Jackson Place, included Jackson Ferry, which had been established by Josiah Jackson in 1795. Thomas lived there until his death in 1879, and his wife continued on the place until her death 18 years later. Both are interred in Winchester Cemetery.

Lafayette M. Green (1830-1898) was a native of Bath County, grew up in Montgomery and was a lifelong farmer.  Lafayette married first Susan Daniel, by whom he had a daughter, May. After Susan’s death he moved to Winchester, where he married Lucy Jackson. Following her death in 1880, he married Dixie Kennedy, who was the same age as his daughter May. Lafayette and Dixie resided in the West Broadway house from 1875 until his death in 1898. The house is shown on the Beers map of Winchester (1877).

Lafayette’s heirs, widow Dixie and daughter May, made an amicable division of his property. Dixie was deeded the West Broadway house, which she sold to Elizabeth Hunt in 1902.

This concluded my search for the Rodney Haggard house.

Dixie Green is identified as the owner of the house where Rodney died in 1901. He must have been renting from her. Little is known about Dixie. A street near the house was named for her:  Dixie Street runs parallel to Broadway between Burns Avenue and Wainscott Avenue.

There are, doubtless, other properties in Winchester that have had as fascinating a series of owners as the “Haggard House” — we will keep an eye out for them.