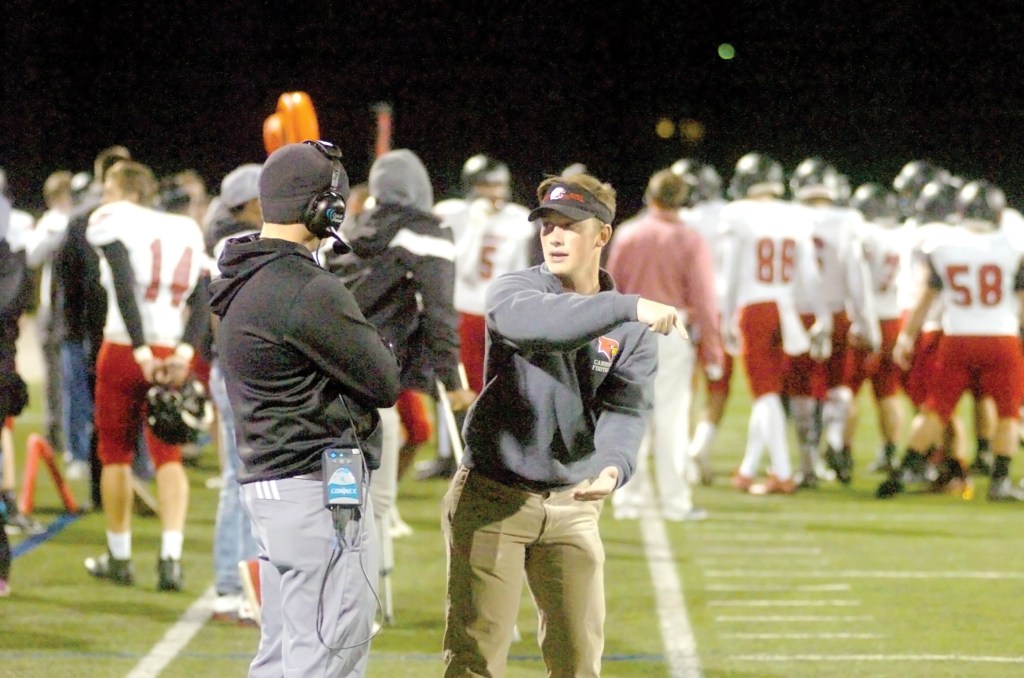 Most 21-year-olds are heading into the last couple years of their college education, maybe still wrestling with what to do with their lives.

“We had a couple vacancies come open late and Ashton expressed an interested in coming to help us,” Riddle said. “One thing that stood out about him, was anything you needed done, he’s right there to do it. Whether it’s helping with the laundry or some computer work — he’s very enthusiastic.”

He also helped guide the program’s freshman team to a successful season as its defensive coordinator, working with freshman coach Jason Ashburn.

“To carry the title ‘Coach’ is a big responsibility,” Ashburn said. “You are responsible for teaching kids how to play, how to compete and how to handle winning and losing. It’s one of the greatest jobs in the world, and coach Boyken has jumped right into this thing with a great attitude and above average football IQ.

Ashburn said most of the freshman team’s opponents had three to five coaches, but GRC used only two.

“Being short staffed, we told Ashton he would be leading the freshman defense,” Ashburn said. “He studied the varsity defense, adapted it for the freshman team and led a very formidable defensive team.”

“It’s been great. The kids have been very coachable,” Boyken said. “There are ups and downs, but it’s a very enjoyable experience. It’s something I would love to continue to do.”

And Boyken did all that while also attending his first year of law school at the University of Kentucky — after graduating from Eastern Kentucky University early.

“I took a lot of AP classes in high school,” he said. “When the counselor told me I had the chance to graduate early, I jumped at it.”

After finishing up at EKU, he headed north for law school, but decided he missed football.

“When I decided not to do

college athletics, I knew I wanted to find a way to coach,” Boyken said. “I never knew the opportunity would come so early.”

Learning the ropes of law school while learning how to coach at the same time is all about organization, he said.

“It’s really all about balance,” he said. “Time management and finding any moment during the day to read and do homework. And after practice, I do homework.”

And it’s not just as simple as pacing the sidelines and yelling.

“I’m pleased with his work ethic and his ability to absorb the football part of it,” Riddle said. “It’s quite a transition moving from being a player to coaching. There’s a lot of details and nuances people don’t know about. For some, it can be like drinking from a fire hydrant. He’s done a fantastic job.”

“There are plenty of 21-year-old guys still growing up, still figuring things out,” Ashburn said. “Boyken is a 21-year-old who already has one college degree, attends UK law school in pursuit of his next degree and still has time for the demands of high school football.

“He’s a good role model for these kids.”

And those are kids he knows pretty well. He was a Joe Bordas award winner at GRC. His brother Seth is on the varsity team and Tye Boyken is on the freshman squad. Brother Patrick also played for a while.

“Our parents were open to us playing sports, and football is what we took to,” Boyken said. “As I became part of the GRC family, they did too. It became a big part of our lives.”

The closeness was a concern for Ashburn, who was afraid the familarity would undermine a coach’s authority.

“He knows all these freshman players and their families,” Ashburn said. “So from the very first summer practice, I demanded the kids refer to him as ‘Coach’ during practice times and games. Keeping that distance helped the kids to see ‘Tye’s brother’ in a new light, as a knowledgeable and competent football coach.”

Still, being a college graduate and walking the sideline as a coach didn’t rob Boyken of his child-like glee being a part of a game he loves.

“In the pre-season, GRC was playing a 7-on-7 scrimmage at Dunbar,” Ashburn said. “This format allows coaches to be on the field during play. When it came time for the freshman team to play defense, Ashton and I were stationed behind the defense as the players took their alignments. After he called his first play and saw kids responding to his play call, he looked me in the eye and said ‘Man, this is fun!’”

How much football remains a part of his life all depends on the opportunities. Even as he pursues a career in law, staying on the sideline is certainly something Boyken would like to do.

“I would love to be a head coach at some point in my career. I would love to see it happen,” he said. “But I am content where I am. It was a great experience to be around the program I grew up with, and I would be happy to keep coaching at this level.”

Still, there’s at least a little bit of relief that the season is over.

“With finals coming up, that’s huge,” he said.