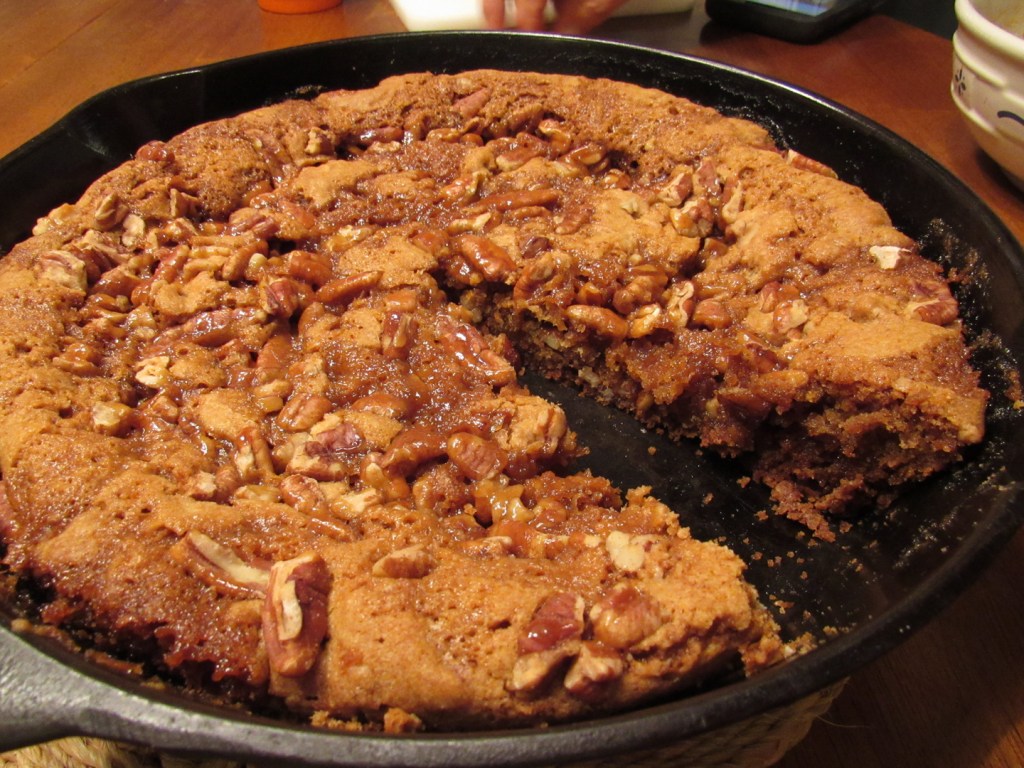 Every year for Christmas my husband Brad gets me a subscription to Southern Living Magazine. I’ve enjoyed this magazine for years and have torn several recipes out of past issues and they are in my stack of things to make some day.

After looking at the November 2016 issues several times, I decided I would have to prepare a “Deep-Dish Skillet Cookie” very soon.

The basic version of the recipe is for a chocolate chip cookie and the magazine included five other variations on that recipe — Pecan Praline, Mississippi Mud, Strawberry Shortcake, Grasshopper and Hummingbird.

I decided to prepare the pecan praline version of this recipe (because I don’t like chocolate) sometime over the weekend and the only ingredient that I didn’t have on hand was the toffee bits (the ones without chocolate).

So while I was in town on Saturday, I picked them up at the store. On Sunday, we were going to have vegetable soup and cornbread for supper and that afternoon I decided I’d go ahead and make the skillet cookie for our dessert that night.

The recipe calls for

Whisk together flour, baking soda and salt in a bowl. Add to butter mixture gradually, beating at low speed until combined.

Bake in preheated oven until golden and set, about 50 minutes.

Let stand 15 minutes and then cut into wedges. Sprinkle with flaked sea salt just before serving.

My mom’s mother (Granny Tavie) passed away several years ago and I was lucky enough to get one of her cast iron skillets. I rarely use a cast iron skillet, but this recipe gave me the opportunity to do so.

First, I sprayed the skillet with Pam and set it aside. Then, I put the butter in a covered bowl to let it soften. When the butter had softened, I gathered the rest of the ingredients I needed for the recipe and got started.

This recipe was extremely easy to put together, though the batter was pretty stiff and took some elbow grease to get the pecans and toffee bits mixed in.

I spooned the batter into the skillet and then sprinkled the top with more pecans. (Yum! I love pecans and always have them in the freezer.)

I had to dig around in the back of my refrigerator to find the caramel sauce. When I found it, I hoped I had enough for the recipe because the jar was almost empty. After measuring, I had just enough. I drizzled it over the top and popped the skillet in the oven and set the timer for 50 minutes. When the timer sounded, I checked the cookie but it seemed a little jiggly to me so I set the timer for an additional five minutes.

Even though I wasn’t convinced the cookie was done I removed it from the oven and let it cool. I have to admit, it smelled pretty good.

After supper I asked Brad if he wanted to try some of the skillet cookie and he asked what kind it was. Because it didn’t have chocolate in the title he said he would pass — he’s not a big sweet eater unless it involves chocolate. The recipe states to sprinkle a little bit of flaked sea salt on top of the cookie before eating. To me, this sounded really yummy because I love eating sweet and salty stuff together. I like a milkshake and salty french fries together, but I don’t dip the fries in the shake.

I cut myself a small slice and sprinkled a little bit of the flaked sea salt on top. Before I took a bite, I asked Brad if he was sure he didn’t want some. Again he said no, but then I offered to stick a few chocolate chips in a bite and he agreed to taste it. We both decided this cookie was a hit and that we needed to share this dessert with several people so we wouldn’t eat it all.

We called our neighbors, Rachel and Chris and they were willing to be taste testers again so we took them a big slice. They both thought it was the bomb.

Still having too much cookie leftover, Brad took some to a few of his girl friends at work and they loved it. Although Susan only used a small amount of flaked sea salt due to high blood pressure and Donna didn’t think the sea salt added anything, Tina thought the whole thing was delicious.

So the verdict is I “Nailed It.”

Because the cookie batter is so thick, the next time I make this I’ll probably make it with half being the chocolate chip version and half being the pecan praline version.

The recipe doesn’t call for sprinkling sea salt on top of the chocolate chip version, but you might want to try it.