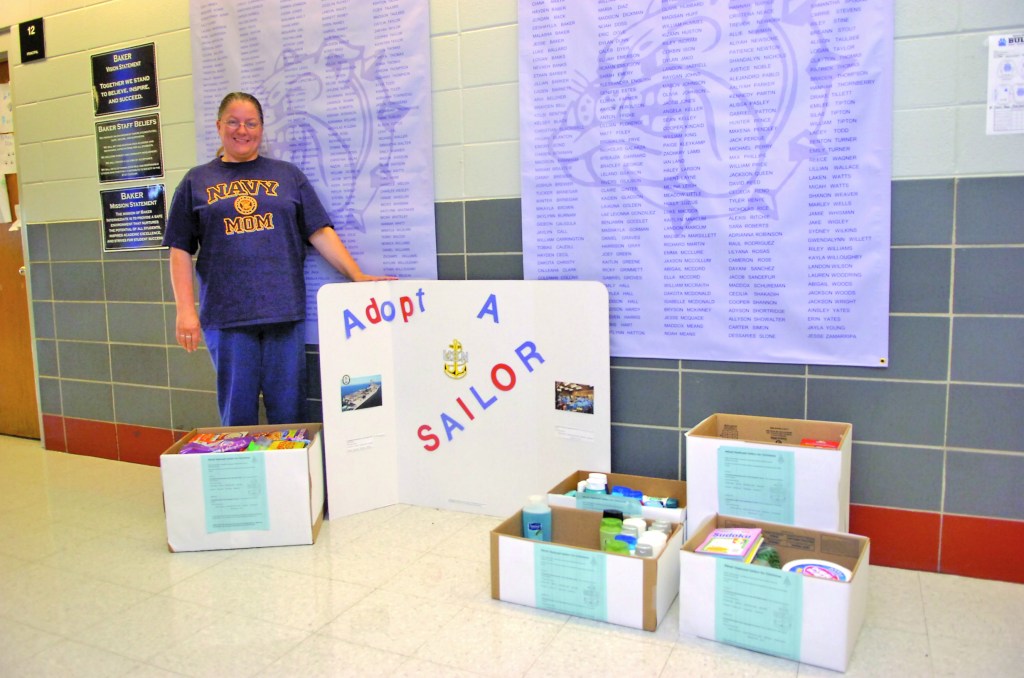 Baker teacher Tracy Bates poses with items collected by Baker Intermediate School to be sent in care packages to two groups of sailors deployed overseas. The deadline to collect the items is Nov. 28. Seth Littrell/seth.littrell@winchestersun.com

Students and staff at Baker Intermediate School are decided to adopt about 90 people this year during the holiday season.

The school is taking part in a program to send care packages to service men and women in the military deployed overseas.

The idea came from teacher Tracy Bates, whose son recently enlisted in the Navy and has been deployed to Japan.

“People don’t realize that these men and women spend long periods of time away from their families,” Bates said. “They will be deployed all through the holidays.”

The school has adopted two groups from the Navy this year: the engineering department of the USS Makin Island as well as a mobile surgical team that has been deployed to Yemen.

Students and staff are collecting several items until Tuesday, the last day of school before Thanksgiving, to put in care packages that have been requested by the service men and women. However, Bates said she won’t be shipping the care packages until Nov. 28, so additional donations can still be accepted.

Bates said anyone from the community can donate items from the list by either dropping them off at Baker or contacting her — either by calling the school or connecting with her on Facebook — so that she can pick up the donation.

She also said the students are making Christmas cards to send in the packages as well, and cards or letters of support from others in the community are welcome too.

Bates said this is the first time that she knows of that the school has adopted service members, but she hopes it will be a tradition that continues in the future.

“Even if the school doesn’t continue to do it I will continue to,” she said.

Collection boxes for the requested items have been set up inside Baker Intermediate, in the front hallway.