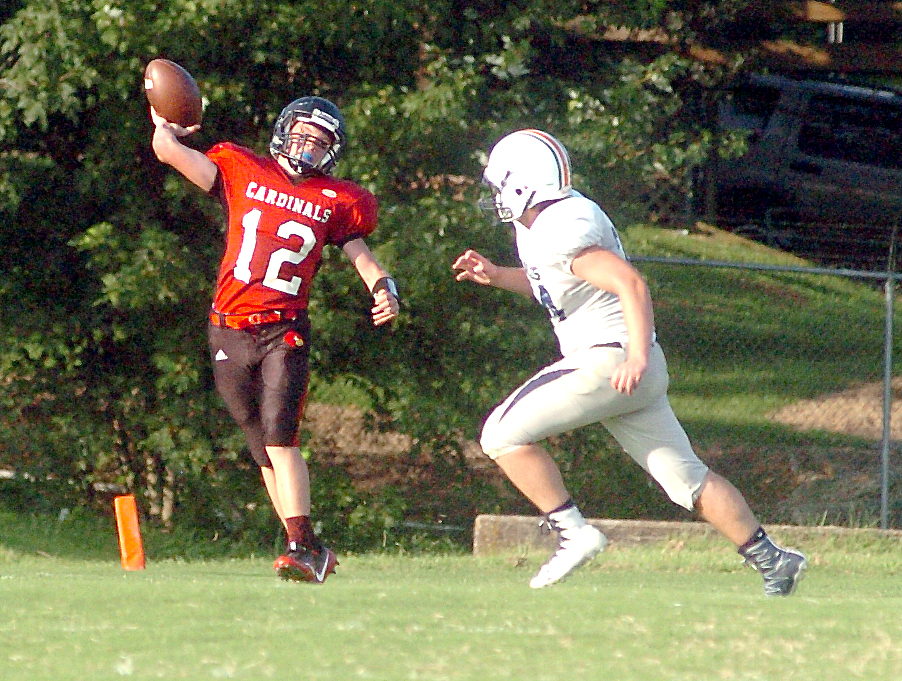 Casey Castle/casey.castle@winchestersun.com GRC’s Dakota Puckett, No. 12, led the Cardinals to some key wins, including an all-around performance at Lexington Catholic.

Cardinal Stadium will sit quiet and empty tonight. And until next fall, it will stay that way.

But for George Rogers Clark football fans, a glance of what next autumn could look like isn’t far away.

The GRC freshman football team finished its season with a 6-5 record and placed fourth in the Bluegrass Conference, which is made up of 10 high schools, including six from Lexington.

The freshman team began its pre-season work in July and played its final game Oct. 29. The Cards’ conference is divided into two divisions, and GRC took second place in the County Division.

GRC was led by Dakota Puckett, Tyler Price and Jaylynn Johnson, who delivered on big plays and accounted for several touchdowns early in the season.

In a Labor Day game at Madison Central, Tye Boyken hauled in a 50-yard TD pass from Puckett.

“From that point on, a Puckett-Boyken TD pass was a real threat at anytime from anywhere on the field,” GRC fresman team coach Jason Ashburn said. “Those two connected for some big time plays this year.”

The Cards then endured two big losses against Scott County and Lafayette, two of the best programs in the state

“That two-week stretch enabled us to message the kids about response to loss and response to adversity,” Ashburn said. “I hope those lessons stick for life.”

Then came Lexington Catholic, a new team to the conference. It turned out to one of the best games of the season for GRC.

A low-key highlight for the team came when the Cardinals lined up to kick an extra point and converted it.

“I have only seen one other freshman team in two years even attempt a PAT,” Ashburn said. “It was a nice moment for our kicker Tye Boyken. Our practice paid off. But the holder, Dakota Puckett was as jubilant as anyone else. You would have thought the boys had just won the Super Bowl by their reaction to that extra point.”

On the back end of the season, the boys got a chance to play a rivalry game at Montgomery Co. At the end of regulation, it was a tie game.

Costly penalties did not help the young Cards. By game’s end, some key players were lost to injury. GRC lost the game 12-6 in double overtime.

“Championship Day” featured a rematch with Tates Creek, who had also finished second in their respective division.

“Going into that final game, our roster was down eight players from the first game,” Ashburn said.

A perfect storm of injury and illness hit the team in the last week of the season.Despite being shorthanded, GRC prepared a simple game plan.

“We moved players into best fit positions and then installed a couple of audibles,” Ashburn said. “The plan was to let the quarterback call offensive plays away from the opponent’s best defender.”

Isaac Graham, who had played wide receiver all season, embraced the new role under center.

“He made great calls, and led the offense to multiple first downs in the game,” Ashburn said. “I can’t tell you proud I was of those kids, many of whom were backups.”

Swartz, Graham, Lewis, Taylor, and Bates played their best game of the year, he said.

“Stephen Morgan and Noah Carpenter stepped into key roles,” Ashburn said. “Tye Boyken and Chase Taulbee showed poise and leadership just as they have all season.”

Creek won the game 20-0 but, for the Cardinals, it did not feel like a loss.

“It was absolutely our best effort of the year,” Ashburn said. “Our kids played their hearts out, and their efforts were noticed by coaches, parents, and even a couple of varsity players who came out to the game. In the fourth quarter, one of the referees even told me, ‘I hope your kids score,’”

With an approved sports complex on the horizon,  a new-look varsity schedule next fall and the talent in these younger classes, the future of GRC football looks a bit brighter than its recent past.