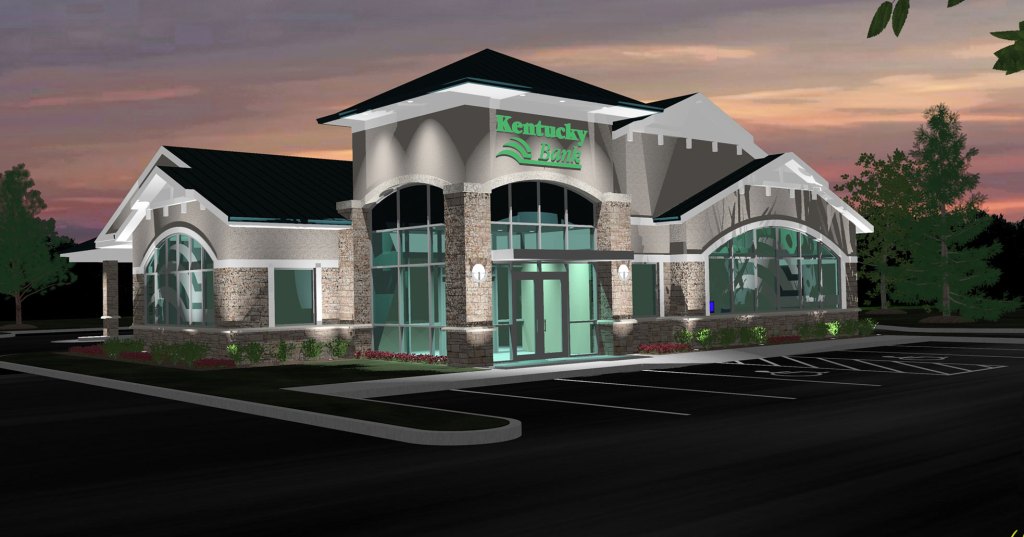 Photo submitted This artist’s rendering shows the exterior view of the new Kentucky Bank branch to be built at the intersection of Colby Road and the Bypass. When the current branch closes business today, the facility will be shut down and demolished to make room for the new building.

When the Colby Road branch of Kentucky Bank closes for business at 6 p.m. today, the facility will be shut down for good.

In the coming days, a mobile unit will be set up on the property, at the intersection of Colby and Bypass roads to serve the bank’s customers while the current office is torn down to make room for a new building, Kentucky Bank Market President Darryl Terry said.

The bank’s office on Colby Road and the Bypass will be completely rebuilt, and during construction, will maintain a temporary office at the same location.

“We will open our downtown office Saturday until we can get that mobile unit in place,” he said. “Then we’ll take steps next week to start tearing that building (on Colby Road) down.”

In April, Kentucky Bank announced plans to build two new offices in the next two years — one on the Bypass and another in downtown Winchester.

Kentucky Bank and CVS have come to an agreement involving the property on the downtown corner of Maple Street and Lexington Avenue. CVS Pharmacy will purchase the Kentucky Bank building located at 24 W. Lexington Ave

The downtown branch will then be built on a new site at the intersection of Washington and North Maple streets.

Terry said the combined new buildings will add more jobs and nearly $5 million in improvements, along with adding to the landscape of Clark County.

The two new Kentucky Bank offices — which Terry said would be a two-phase project — will drastically upgrade the current properties into fresh, dynamic spaces, he said.

The new facility will be a modern, attractive and comprehensive financial information center, Terry said. Terry said the current Colby Road facility is 40-plus years old, and the company has already added on to the building twice.

“It’s all about how our customers will feel when they come in,” Terry said. “It will be more of a customer ‘wow factor.’ As demographics change and more clients are doing their banking outside of the office, we wanted to a build a facility where they will feel comfortable coming in and experience five minutes of sunshine.”