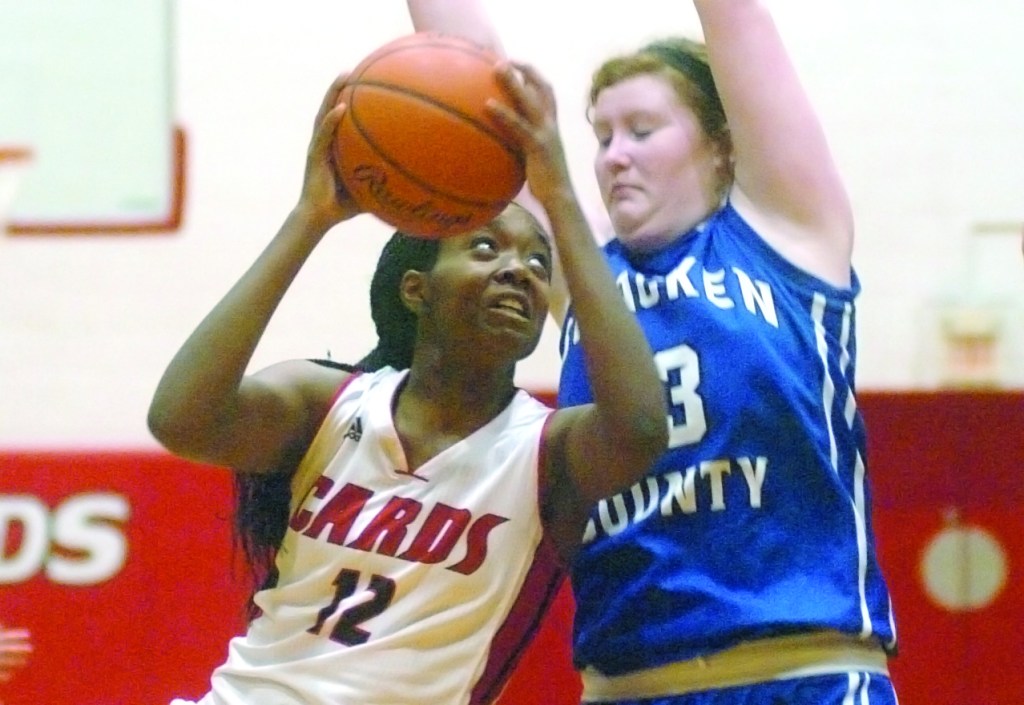 Sun file photo by Casey Castle GRC’s Maleaha Belle and the Cardinals will have to muscle their way past tough region opponents like Bracken County to get another shot at reaching the region tournament title game.

The semifinal round games of last year’s 10th region tournament were decided by a combined three points. Scott High edged past Mason County, and Campbell County survived a game-tying three-pointer at the buzzer by George Rogers Clark’s Jasmine Flowers by winning in overtime.

Somehow, it might be even tougher to pick a winner to represent the region at the state tournament in the spring.

“That atmosphere was as good as I’ve been around and I’ve been on the boys side for several years,” GRC coach Robbie Graham said. “When you have the excellent teams we have in our region, it’s going to be a battle.”

The Cardinals are considered a co-favorite to win that battle, but the competition is deep enough that plenty of teams could hold the region championship trophy at the end of the seaon without it being considered a shock.

GRC finished 18-11 on the year with a 11-4 mark in the region. Campbell went on to win the tournament after surviving the Cardinals, The Camels lost in the second round of the state tournament.

Here’s a look around a stacked league:

Quotable: “We’re looking to improve each day in practive and strive for consistency. Our goal is to be ready for the All ‘A’ in January.” — Coach Robin Kelsch.

Quotable: “The team lost five seniors, who were all scorers. We’re going to look to (sophomore) Mariah Frommeyer to be a presence for us.” — Assistant coach Tyler Owen.

Quotable: “We got better toward the end of last year and we were fortunate enough to make the region tournament for the second year in a row. We’re going to see if we can develop like that this year.” — Coach Bill Watson.

Quotable: “We expect (senior) Madison Kalb to be an inside presence for us. The girls are really getting after in practice. I think they will be ready and we will surprise some people.” — Coach Deron Ray.

Quotable: “We are not big. We will have to move around a lot. I’m happy with their work so far, but we have a long way to go to compete for a title. We want to win 15 games this year. That’s our goal.” — Coach Isaac D. Speicher.

Quotable: “We lost five seniors. So it will be an uphill battle. We want to (win the region) every year, so there’s no extra pressure to repeat. We are just going about our business like we always do.” — Coach Beau Menefee.

Quotable: “We’re a young team, but we will be more balanced. We have will have four guards on the floor and can speed it up. We’ll play a style I like better.” — Coach Kimberly Furnish

Quotable: “We return eight seniors. We put together the most difficult schedule possible so we will be as ready for the post-season as possible.” — Coach Brad Cox.

Quotable: “We’ve hit a bit of a lull in the road. They asked me if I would come back and build this thing back, and that is my goal. How long that road will be, I’m not really sure.” — Coach John High.

Quotable: “Every game it will be a question of who will play. We are deep and pretty even across the board, so it could be anybody. I could have maybe three good teams. We start out with a tough schedule and we’re trying to get ready.” — Coach Greg Letcher.

Quotable: “I want to thank (GRC) coach Graham. He’s been mentoring me and we’ve been texting a lot. I’m fortunate to have 10 or 11 kids who will be able to play. They will be rotated in and out, so that will help us defensively.”— Coach Aaron Speaks.

Quotable: “We have some quality leadership. Our younger players are pushing our olders players. It’s hard to be competitive in a game if you aren’t competitive in practice. We need to find a way to score some points.” — Coach Paige Bowling.

Quotable: “Last year, we had a great run. And this year we have lofty goals: to win a district championship and compete in the region. I feel like we have the players to do that. We have a lot of experience returning. We have up a lot of points last year, so defense is something we’re focusing on.” — Coach Rhonda Klette.