Museum program focuses on Kentucky during World War I 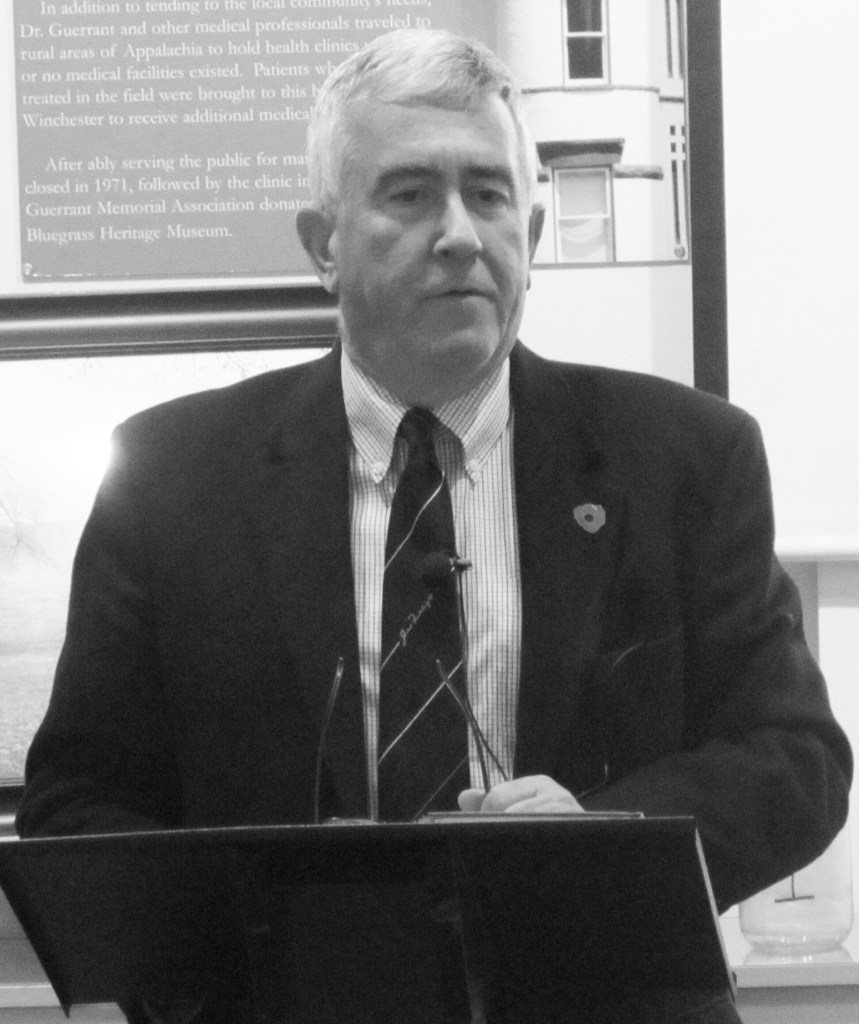 Photo submitted David J. Bettez discussed his recently published book “Kentucky and the Great War: World War I on the Home Front” during the Nov. 10 program at the Bluegrass Heritage Museum.

The Bluegrass Heritage Museum traditionally focuses on a veterans theme for its November Second Thursday program.This year, the idea was expanded to include the role of Kentucky civilians during the World War I.

Featured speaker David J. Bettez discussed his recently published book “Kentucky and the Great War:  World War I on the Home Front” during the Nov. 10 program.

A century ago, Europe was embroiled in this “war to end all wars” which had begun in 1914.  Initially the United States attempted to remain neutral.However, by 1917, the U.S. was fed up with German submarine attacks on U.S. ships (among other reasons) and was ready to declare war on Germany and its allies.The country prepared to go to war.

=On the whole, Kentuckians were very supportive of the war effort.There were celebrations all over the state when we entered the war.This contrasted with much of the rest of the south where opposition ran high and many considered it “a rich man’s war but a poor man’s fight.”  Federal troops even had to be sent into four southern states to deal with protesters.

There were a few incidents of suppression in Kentucky.A significant German population lived along the Ohio River, and once a vigilante group called the Citizens Patriotic League beat, tarred and feathered a supposedly pro-German preacher.  Three men in a barbershop talked against the war among themselves and were convicted in federal court; President Wilson refused to commute their sentences after the war was over.  Holiness churches in eastern and southern Kentucky spoke out against the war and Wilson, and members were arrested and went to prison.  The Espionage Acts of 1917 and 1918 contained controversial provisions that outlawed speaking against the U.S. war effort.

But by and large, such things happened far less in Kentucky than in other southern states.Patriotic fever ran high here.Bettez explained that people in Kentucky were expected to jump in and help the war effort. Anyone who didn’t support the war became known as a Slacker and could feel the derision of his neighbors.

Before the war the Red Cross had three chapters in the entire state; this grew to chapters in 115 of the 120 counties.Bandage rolling and fundraising were typical support activities.One enterprising man in Fulton County “auctioned” a number of unusual items — green onions, a flock of geese, an old man’s whiskers, even the Mississippi River — and raised $1,200 for the Red Cross.

Buying War Bonds was another way for Kentuckians to support the war financially and tremendous amounts were raised.Many Kentuckians were illiterate at this time, so written calls to support the effort had limited impact.Bettez described one creative way of getting the War Bond message out.“Four Minute Men” were people who got up and addressed the audience at theaters during the four minute breaks it took to change reels.

The Food and Fuel Administrations were created to help communities produce and conserve these commodities so they could be used to support troops.Families were encouraged to plant gardens and participate in Meatless Mondays and Wheatless Wednesdays.  There were “lightless” days declared, and no one was supposed to drive on Sundays.If you did, you were considered a Slacker.

One member in the audience noted that only a few iron rail fences remain in front of downtown Winchester houses from this period.People were expected to dismantle their fences so the iron could be used in the war effort.

In several aspects the war was good for Kentucky economically.The “Smokes for Soldiers” program resulted in an increase in tobacco production.The need for coal skyrocketed.Even Kentucky horses were in demand for Army officers’ mounts and to pull loads (there were few European horses left by this time).Bwamazon Farm on Two Mile Road was one supplier of horses.

Alcohol production, on the other hand, was cut back since crops that would have been used to produce it were instead needed to feed troops.This made the Prohibitionists happy.

On the military side of things, local Draft Boards were established for recruiting soldiers, and draftees usually found themselves at Camp Taylor in Louisville, which served as a training ground for men from several states.The camp included 2,000 wooden huts and was built in just two months.Organizations such as the YMCA and Knights of Columbus played a large role in supporting the camp.

Not only were the men trained to be soldiers at Camp Taylor, but the army also tried to teach them how to read.This had a huge impact on the men, which of course carried over after the war.

About 100,000 Kentucky men served during the war, not only on the western front in Europe but also in northern Russia, for example.One Kentuckian, Willie Sandlin of Breathitt County, was awarded the Medal of Honor.He became known as “Kentucky’s Alvin York.”  The state lost about 2,500 men in the war.The battleground was not the only dangerous place; the Spanish influenza decimated Camp Taylor.

The war had a great impact on Kentucky in a number of ways.Prior to the war, factionalism and hostility in government “made recent politics look mild,” according to  Bettez.  Only a few years before, in 1900, Gov. Goebel had been assassinated. But the war brought both sides together in a great bipartisan effort to support it

There was a “permeation of government, from the national to state and down to the local level” like never before, Bettez said.Before, people were very localized in their outlook.The war “made Kentuckians much more aware that they were involved in a larger world.”