Where in the World? Chalybeate Spring and other lost places 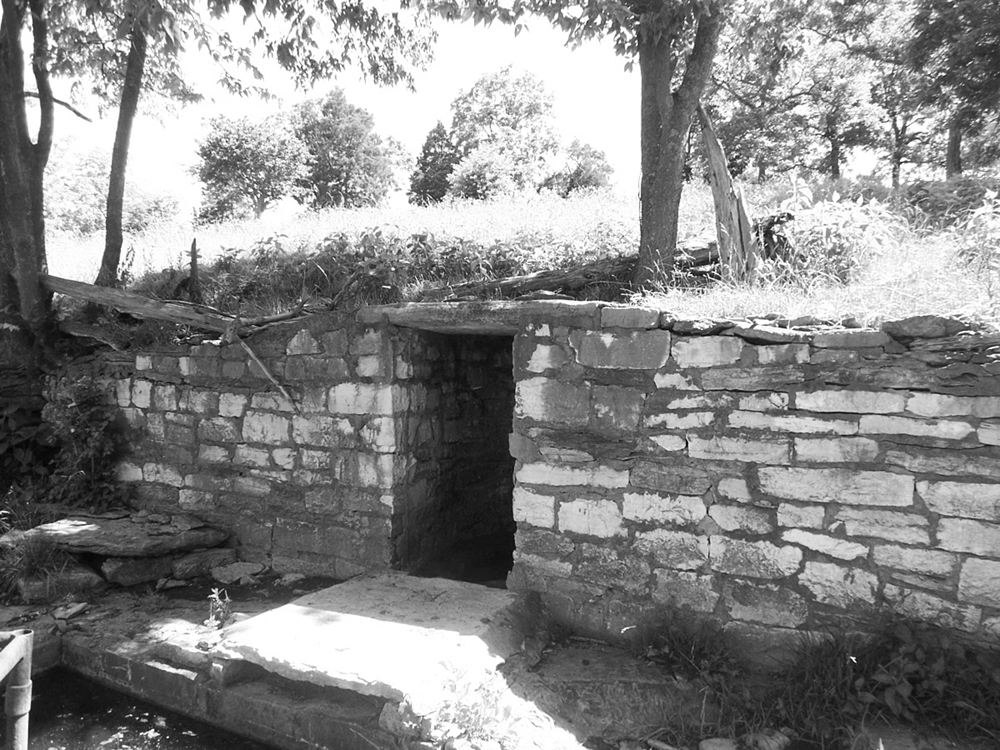 Today our running water and indoor plumbing are things we take for granted. It was not always so.

Before rural electrification and rural water districts, county residents had to supply their own water with wells and cisterns. Our first settlers relied on springs and creeks and had to spend part of each day hauling water. Once upon a time there were dozens of named springs in Clark County, as well as hundreds more unnamed. Some provided pure drinking water. Others provided mineral water which attracted wild game (salt licks such as Log Lick on Lulbegrud Creek) or were tapped for medicinal uses (resort spas such as the Oil Springs, also on Lulbegrud).

An example of the latter is the Chalybeate Spring. The exact location is now lost, but court records (1829) state that it was immediately across the Kentucky River from the mouth of Otter Creek.

This places the spring in the Ford area, before there was a community of Ford. The spring would have been on the site of East Kentucky Power’s William C. Dale Power Station. Very near the north ash pond, a small drainage is visible on Google Maps, directly opposite the mouth of Otter Creek. This may have been the outlet of the spring. The spring itself would have been destroyed by construction of the power plant.

Chalybeate (kuh’-libby-it) is not a single mineral. The term is used to denote waters containing salts of iron, magnesium, manganese and calcium.

Chalybeate springs have been noted for their health-giving properties since the early 17th century. One of the most famous was Tunbridge Wells in England, discovered in 1606. Its waters were said to cure “the colic, the melancholy, and the vapours; it made the lean fat, the fat lean; it killed flat worms in the belly, loosened the clammy humours of the body, and dried the over-moist brain.”  Princess Victoria (the later Queen) drank the waters every day during her stay in Tunbridge Wells in 1834.

Chalybeate springs were found all across Europe and were especially abundant in the British Isles. Many were found in the United States; some of the better known include Saratoga Springs in New York, Brandywine Springs in Delaware, Chalybeate Springs in Indiana and dozens more.

In Kentucky, there were resorts at chalybeate springs in Russell and Union Counties. There is a village in Edmonson County called “Chalybeate Springs,” where people went to “take the waters”; the springs were discovered in the early 1800s and were famous for their supposed healing powers. The hotel there had dancing, dining, horse racing, golf, tennis, and fox hunting. It was a popular resort for more than 100 years and closed during World War II.

It is uncertain when the Chalybeate Spring in Clark County was discovered.

Other noted Clark County springs little known today and possibly gone are Bramblett’s Lick in the Wades Mill area, William Trimble’s spring near Factory Bottom on Lower Howard’s Creek, Stone Lick on the Stone Lick Fork of Upper Howard’s Creek, Logan’s Lick on a branch of Fourmile Creek near Logan Lick Road, Bybee Lick on Stoner Branch of Fourmile, Cold Spring near Pinchem on Fourmile, Buffalo Spring on a branch of Lower Howard’s Creek on the Farris farm, Cave Spring west of Stoner Creek near the intersection of I-64 and US 60, and many more.

One of the most important locations in early Winchester was the “Publick Spring,” where residents obtained water for many years. It was on the west side of Water (now Maple) Street near the Beverly White Towers. To protect the water supply, town trustees approved numerous ordinances aimed at preventing a host of unseemly practices, such as disposing of animal carcasses, watering livestock, washing dirty laundry and dishes, and so on. The spring flowed into Town Branch, both now relocated underground.

McMillan’s Spring, later known as Calmes’ Spring, was well known until the early 20th century. It was a stopping place for a cold drink of water for travelers along the road from Winchester to the Old Stone Church and Boonesborough.

The spring, located on the property of the new county high school, still flows. In fact, in recent weeks the fork of Lower Howard’s Creek from Winchester has been dry until the point where the spring waters enter the creek (near the bridge on Old Boonesboro Road).

There are two strong flowing springs within the Lower Howard’s Creek Nature & Heritage Preserve. Both are marked stops on the John Holder Trail that begins at Hall’s Restaurant and feature dry-laid stone wall enclosures.  There are numerous other wet weather springs in the Preserve.

These old springhouses are still fairly common in Clark County. Examples with stone or brick walls may be found at the Walter Preston House on Basin Springs Road, the Gaitskill House on Wades Mill Road, the Zachariah Elkin House and the old John Martin farm on Boonesboro Road, the old Dudley Wade farm on Donaldson Road, and the Vaughn place on Twomile Creek off Elkin Station Road.